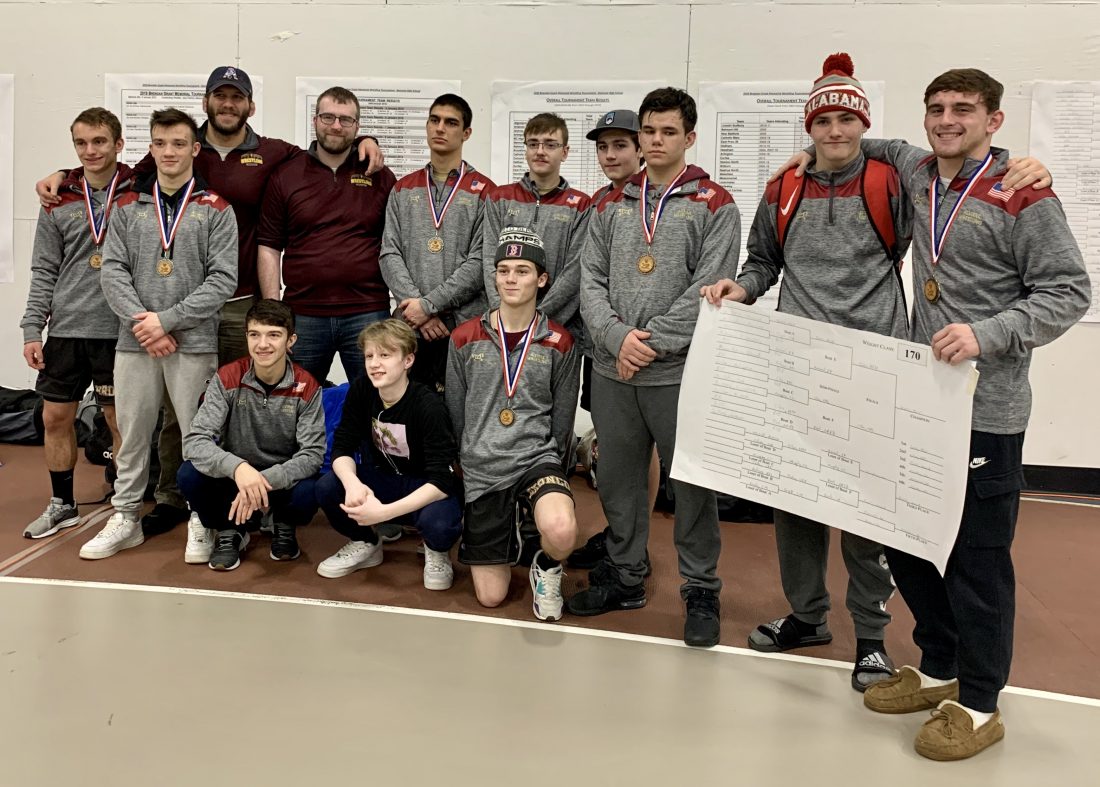 The Alvirne High wrestlers took third at the Belmont, Mass., Invitational on Saturday.

The Broncos finished off a great tournament where they finished third overall. Kyle Gora scored the lone win by a technical fall at 170. Alvirne saw four runner up finishes by Kyle Clark (126), Ayden Spencer (132), Tim Barrett (145) and Nick Manitakos (160). Alex Linke had a strong performance at 195 placing third.

Brett McInerney had a big win for the Cougars at 182, for their only win of the meet. Justin Gandia placed a solid third at 120, Connor Rakie was fifth at 126 and Devin Dube placed sixth at 220. Campbell finished ninth overall out of 18 teams.

Victor Ceballos came away with the win at 138 for the Sabers. Aidan Wilson also placed getting fourth at 170. Souhegan finished 10th in the meet.

On the first day of the Dartmouth Relays the Titans saw many good finishes. Kelechi Okorie had a great runner up finish in the high jump (5-0). Adaobieze Nwanko, Abby Coy, Aliana Mercado and Olivia Mazerolle placed fifth in the 4×200 relay. Sarah Kelley was good enough for fifth in the two mile run. Isaac Smith placed third in the high jump, just in front of Connor Dunning who finished fourth. Alexander Sheran had a fifth place effort in the shot put.

The Sabers came away winners in the distance medley with Adrianna Zlotnick, Emma Herrero, Masho Primmer and Chloe Trudel (12:52.37).

The Cardinals (5-4) boys’ team defeated Merrimack 66-50 and fell to Exeter 103.5-53.5. Jack Januario won the 200 and freestyle. Eamon Griffin doubled up on wins as well taking the 100 freestyle and 100 breastroke. The team of Brendan Dion, Griffin, Garrett Konieczny and Januario won the 200 free relay. The girls’ (9-1) beat Merrimack 107-68 and took their first loss of the season against Exeter 108-62. Moira Davison won the one meter diving event with Olivia Shusta taking the win in the 100 breastroke.

The Tomahawks (3-1) grab a decisive home win and their third straight. Evan Roy and Zach Stimeling each found the back of the net twice. Dylan Sadowksi and Zach Richard each scored once.

Nashua North-Souhegan (1-4-1) lost in a nail biter at home against Hanover. Jack Belter scored the lone goal for the locals. North-Souhegan visits Concord on