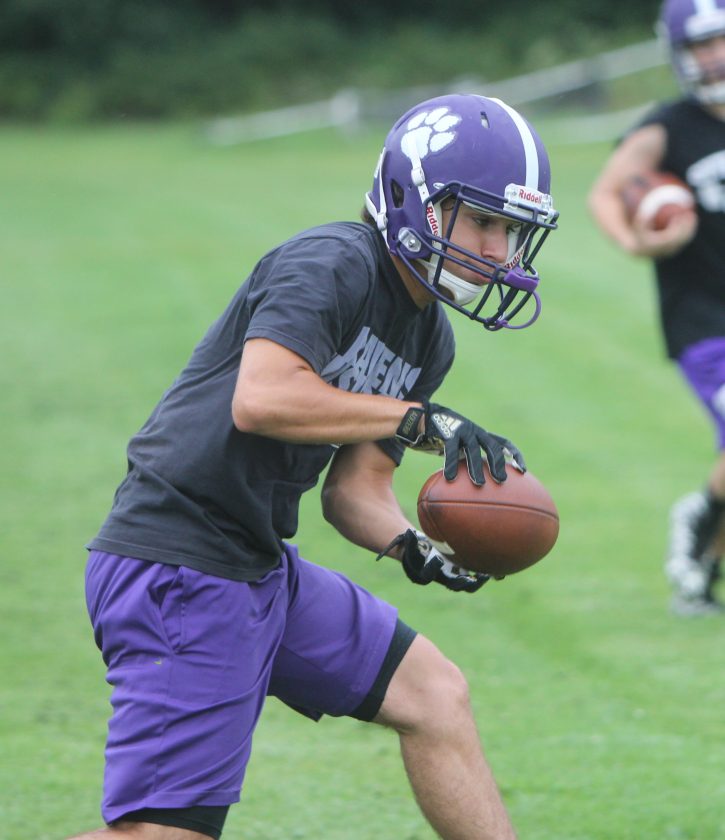 Telegraph file photo by TOM KING Tanner Plourde is using the Shrine Game experience as a springboard to his college football career at Plymouth State that begins in a couple of weeks.

Tanner Plourde has been in heaven all week.

Why? Because this week at camp at Vermont’s Castleton University in preparation for the annual Shrine Maple Sugar Bowl Game set for CU’s Spartan Field on Saturday, the daily routine is all about one thing – football.

“It’s a lot of fun,” said the Nashua South alum, who will see time at the safety position for the New Hampshire squad on Saturday vs. Vermont. “You’re just doing football, you don’t have to worry about homework or anything like that.”

Plourde will head to Plymouth State to begin his college football career in just over two weeks, so this experience gives him a little sneak preview of his first college football training camp.

“Yeah, I definitely think so,” he said “We’re living together on one floor, spending all day together, three meals a day together, two to three practices, we have film, we have white board, and when we’re not doing all that, we’re sleeping.

“It’s a good warmup (for Plymouth). It’s like a camp right before camp, get me going, make sure I’m in good shape, make sure I get my technique down and I can hit the ground running.”

Of course the game isn’t just about football. Being selected to the Shrine Team is one of the biggest highlights of Plourde’s football career, one he doesn’t take lightly for good reasons.

“It’s really an honor,” Plourde said. “It shows the hard work I put in for four years of high school really paid off. It’s a tribute not only to my hard work and talent but my character as well, because it’s a charity game. It’s for something bigger than just football in general. It’s for the less fortunate, helping others, and I think that’s what’s most important. … We’re just trying to help the best we can.”

Plourde started football in fifth grade. “I just wanted to hit somebody,” he said. “I played baseball and basketball, and I got yelled at in basketball a lot for being too physical.”

Ironically, he originally wanted to play college baseball, because that was the first sport he began to play as a youth. “But when I started playing football on varsity (at South), that really changed my mind,” he said. “With football, the brotherhood, you’re more together in football, and I fell in love with that feeling and focused more on football.”

At South, Plourde played free and strong safety and was a sometime slot receiver. But safety was where he excelled. “I liked the mismatches a lot,” he said. “It makes you work harder, makes you focus on your technique to cover that big tight end. I really liked that.”

He seemed like a perfect fit for South coach Scott Knight’s philosophy.

“Coach Knight, he turns a lot of football into life lessons,” Plourde said. “How to work hard, hard to work with others, develop leadership, a lot of things that were more than just football. He made sure we were doing good in the classroom, and outside of school, community service. He helped us develop into young men.”

And Plourde developed as a football player. As a freshman, Plourde wasn’t at the top of anyone’s depth chart, but that changed with hard work.

“People who do the work and do what he asks,” Plourde said, “they all get significantly better.”

What made Plourde one of the better players? Dedication and persistence.

“I just had the discipline, went to the weight room for three years, and it paid off. While some people would fall by the wayside, I’d just keep going and it worked.”

That disiplinary approach helped him at safety become more of a field general. “You have to know where everybody’s going, and at safety you’re kind of the last resource,” he said. “You have to know where someone is most likely to mess up (in coverage mismatches), who has the hardest job, where to help. Being a good open field tackler helps a lot, especially on a lot of those breakaway plays.”

He’ll study exercise physiology at PSU, with the hope of being a strength and conditioning coach someday – something Knight has always been strong on, especially early in his coaching career. “Coach Knight has been a big influence in my life,” Plourde said. “So I want to help other young kids become great men as well.”

He’ll begin by helping a lot of young kids on Saturday, playing for the Shrine cause.