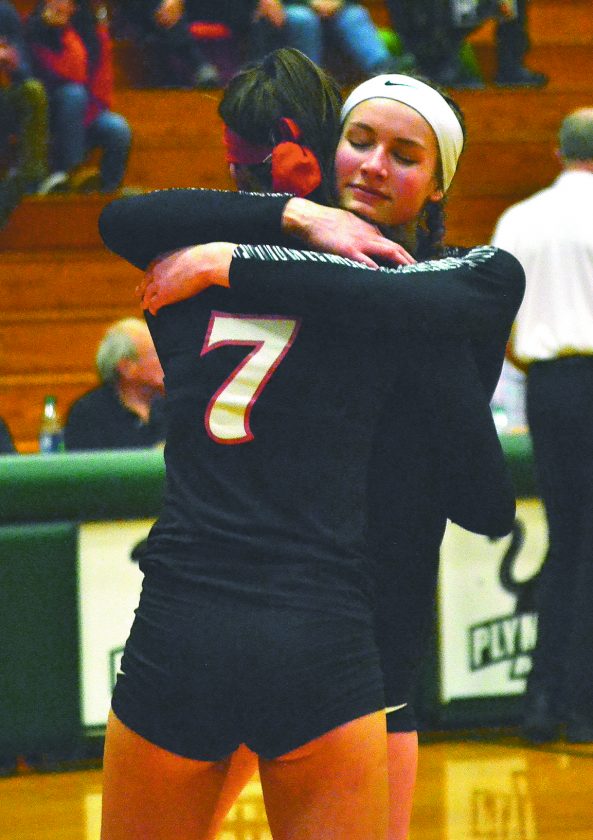 Photo by ANDREW SYLVIA Kanaley and Mallory Reczko shortly after dropping the final set of their semifinal match.

Mascenic did not trail in the first set, taking it 25-15, but the Cougars did bounce back in the second set.

There, Campbell started with a 5-1 run before the Vikings evened things up. A see-saw battle ensued, but Mascenic eventually would pull away, earning a 25-20 win to put the contest on the brink.

In the third set, Campbell had what was perhaps its best chance, dropping the first two points to Mascenic before grabbing eight of the set’s next nine points. It looked like that lead might hold, but the Vikings kept chipping away, ultimately drawing even at 17-17, with three more deadlocks on the scoreboard before Mascenic captured the contest’s last three points.

For Campbell Head Coach Melissa Miner, the key was a lack of communication amongst her squad, something they had no trouble with against Winnesquam in the quarterfinals.

“We struggled, we played so much better against Winnesquam, but I’m proud of them, they didn’t give up, we were ahead in that third set,” she said. “I can’t complain, they did a great job. Sometimes they got a touch on the ball, but just couldn’t finish it off. That just happens sometimes in volleyball.”

That split personality belied Campbell’s regular season, which saw five straight losses sandwiched between six straight wins and five straight wins. Still, without talent, Campbell wouldn’t have made it this far even if the consistency wasn’t quite there.

This marked the third time that senior Mallory Reczko had made it to the state semifinals. She will be back on Friday to root for Mascenic in the Championship game, but she knows her squad could have made it there.

“I definitely think we could have won this game, our team is really good,” said Reczko.

Conversely, this marked the first time any member of the Vikings has gotten this far in postseason play.

Mascenic coach Karen Gibson credited her team’s six service aces as key to victory, as well as making sure the pressure of the moment didn’t distract from what got the Vikings this far.

“My girls didn’t lose their composure, we knew if we stuck to the fundamentals, we’d stay in the game,” said Gibson.

Sophomore Annika Martel had three of those service aces for the Vikings, also contributing three kills.