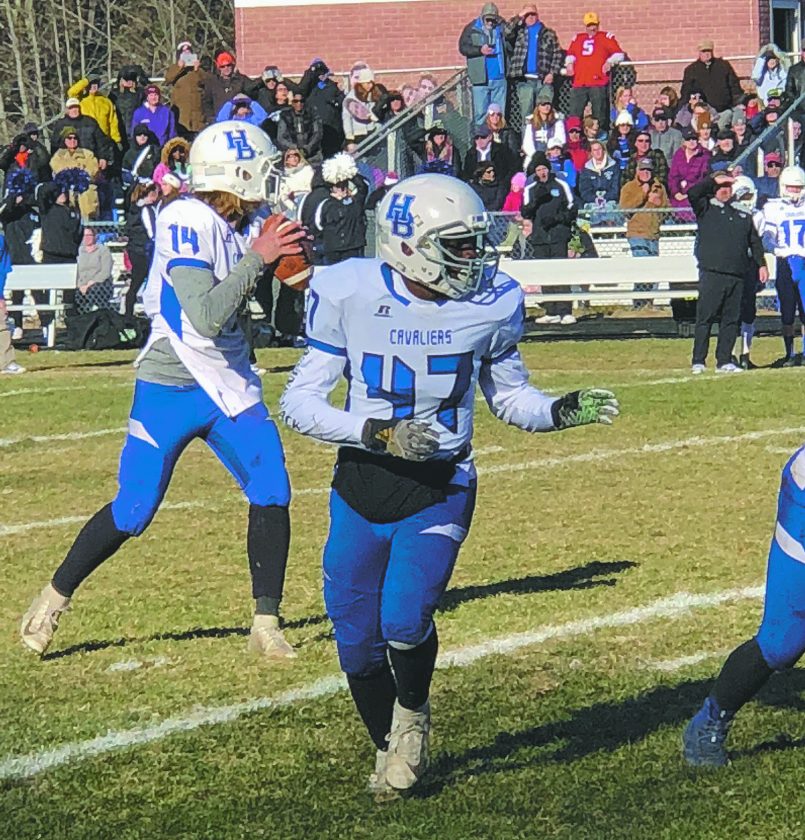 Photo by CHRIS PANTAZIS Running back Marc-Andre Thermitus does some blocking for his quarterback Sander Wimmer during the Hollis-Brookline football team’s semifinal playoff win over Bow on Saturday. Both Thermitus and Wimmer ran for more than 100 yards in the historic win.

BOW – Hollis Brookline football coach Chris Lones took stock of the fact that prior to the 2019 campaign numerous prognosticators looked at his squad as one which, at best, was on the proverbial “bubble” to even qualify for the Division II playoffs. And he reminded his Cavaliers of that throughout the

So you can be quite sure that Lones made mention of those predictions once again on Saturday afternoon in the moments after his fifth-seeded Cavs made history by becoming the first Hollis Brookline grid contingent to advance to a state championship contest by thumping the previously-undefeated and top-ranked Bow Falcons in the division’s semifinal play. Lones’ skilled and determined crew hammered the host Falcons by a 34-14 tally by putting forth a well-rounded performance which featured 100-plus yard rushing efforts and touchdown sprints from both senior quarterback Sander Wimmer and junior running back Marc-Andre Thermitus and a strong

“I’d say it was a complete performance,” said Lones with a wide grin. “I’m really proud of them. They just fought and fought.”

The host Bow bunch strode confidently into the semifinal playoff battle with a gleaming, 10-0 record having absolutely trounced number eight Souhegan by a 51-7 tally in the quarterfinals a week earlier.

The top-seeded Bow bunch hadn’t scored less than 33 points in a game since week one when it managed to edge three-time defending D-II champs Plymouth by an 8-7 margin. And the Falcons tallied no less than five shutouts in their 10 victories

Fifth-ranked Hollis Brookline, meanwhile, was on some kind of serious roll itself, having won five contests in a row including its 49-21 thrashing of No. 4 Kennett in the quarterfinals a week before.

The Cavaliers, who bounded into semifinal play able to boast of an excellent 8-2 overall record, had scored 49 or more points in four of the five aforementioned recent victories.

Bow and Hollis Brookline didn’t square off during the 2019 regular season, but looking at some common regular season opponents gave at least a bit of a window into how the squads might match up going into the semifinal.

Be all of that as it was, all numbers went out the window when the Cavaliers and Falcons teed it up in Bow in bone-chilling weather early Saturday afternoon.

Hollis Brookline claimed an early lead by making its first offensive possession of the day pay off with a 1-yard scoring push by Thermitus to cap off an 11-play drive which covered 66 yards in slightly over four minutes.

The extra-point try failed, but the Cavs were still quite pleased to be first on the scoreboard with a 6-0 advantage.

Bow responded with points of its own four-plus minutes later in taking what would prove to be its one and only lead of the entire day.

Running the ball some eight times and passing it successfully once, the Falcons established what be their offensive pattern for the day, with lanky senior running back Steve Guerrette covering the final four yards of the 73-yard drive and ending up in the end zone.

Guerrette would finish his Bow gridiron career by running for 107 yards and that lone score on 22 carries. The extra-point try was successful, and Bow went up 7-6.

However, the Cavaliers who snag a lead they would never relinquish in the opening seconds of the second quarter when Wimmer lofted a 33-yard touchdown pass to Blake Bergerson, and kicker Andy Basque’s extra-point was good this time as the locals went up 13-7.

After the Hollis defense stymied Bow on its next offensive possession, the locals put together a seven-play drive which covered 65 yards and was capped off by Wimmer’s 4-yard jaunt to points with 6:15 remaining in the first half. And the successful PAT made the score 20-7.

But on the final offensive series of the half Bow showed clearly that it had no intentions of having its undefeated season or its title hopes slip by the wayside by keeping the ball for a full 6:10 and ending the half by scoring at the tail-end of a 13-play drive – all running plays – which the Falcons completed with a 5-yard scoring push by junior back Andrew Robbins into the end zone.

The subsequent point-after try was good, and the Hollis lead was down to 20-14 at the break.

But the Cavaliers’ defense would stand up tall in the second half, holding the powerful Bow offense to just 86 more offensive yards and no points in the final two quarters.

A.J. Johnson killed one series in the third period with a fumble recovery, and Adam Slater buried another series in quarter four with a huge fourth-down quarterback sack.

Hollis pushed its lead up to 27-14 with a 5-yard scoring jaunt by Thermitus with 53 seconds to go in the third, and the Cavaliers then made it a 34-14 contest with an 18-yard sprint to points by the speedy junior back with a mere 1:33 to go on the game clock.

The victorious Cavs – who will now square off with Plymouth for the D-II crown at UNH this weekend – ended up with 328 offensive yards.

Wimmer tallied 117 of those on 14 carries with his one touchdown, and Thermitus was good for 107 yards and his three scores on 16 carries.

The Hollis quarterback went 10 for 15 passing for exactly 100 yards with one touchdown and a single interception.

Bow ended its otherwise dominant season with an effort which featured 267 yards worth of offense, 229 of which came via the running game.

“We told them all week long that the key for us to was to be efficient. And they gave us a great effort,” Lones said.