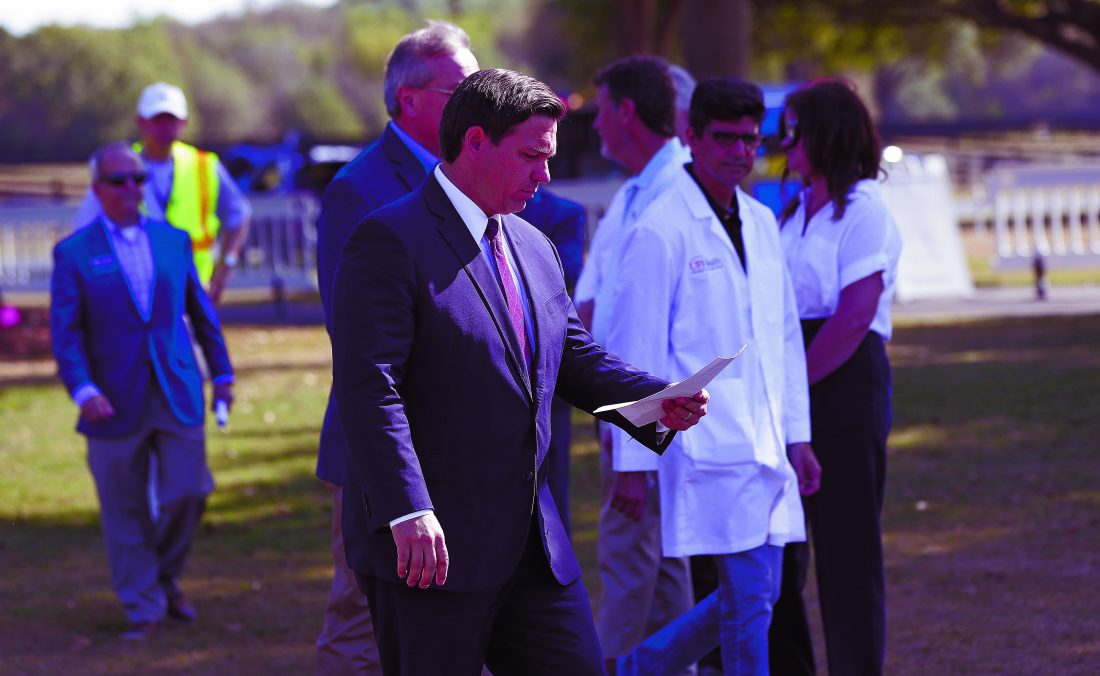 FILE- In this March 23, 20202 file photo, Florida Gov. Ron DeSantis, center front, arrives at a mobile testing site for a press conference Monday, March 23, 2020, in The Villages, Fla. The Villages, a retirement community, is one of the largest concentration of seniors in the U.S. Republican Gov. Ron DeSantis has been walking a tightrope for weeks during the coronavirus crisis, trying to protect both Floridians vulnerable to the virus and the cratering economy in a state of 21 million people. (AP Photo/John Raoux, File)

ST. PETERSBURG, Fla. (AP) – Florida Gov. Ron DeSantis has been walking a tightrope for weeks during the coronavirus crisis, trying to protect both residents vulnerable to the virus and the cratering economy in a state of 21 million people.

His dilemma is a clear example of the conundrum facing the president of the United States and governors across the nation: His state has both an enormous population – a large percentage of which is old and particularly vulnerable to the virus – and a thriving economy whose collapse could result in the loss of hundreds of thousands of jobs.

The success or failure of the Republican governor’s decisions could have major consequences for the national economic recovery, not to mention the presidential election. No single state is more central to President Donald Trump’s reelection.

Critics say DeSantis is relying too heavily on how his actions could reflect on the president – or affect his relationship with Trump.

“I don’t think Ron DeSantis makes decisions without consulting with the president, or those close to the president,” said State Rep. Anna Eskamani, a Democrat from Orlando.

Like Trump, DeSantis has been resistant to impose a statewide shutdown as New York, California and Illinois have done. Instead, the governor – in his second year in office – has pushed an incremental approach, suggesting that restrictive measures be put in place only in the hardest-hit counties. To do otherwise, he said, could cost hundreds of thousands of Floridians their jobs. Nearly a third of Florida’s counties have had no cases of COVID-19, but most are small and rural.

While DeSantis has taken a cautious approach about shutting down public spaces and private businesses, he did note that his wife, who is due to have a baby soon, has not left their house since the beginning of the month.

“She was sick in January. … We didn’t really know what it was. My kids got a little sick. I was fine. But you know what? It could have been this,” he told The Associated Press after a news conference Wednesday.

For most people, the new coronavirus causes mild or moderate symptoms, such as fever and cough that clear up in two to three weeks. For some, especially older adults and people with existing health problems, it can cause more severe illness, including pneumonia and death. The vast majority of people recover.

DeSantis’ most controversial decision came earlier this week, when he issued an executive order requiring anyone coming into the state from the greater New York area – which has seen the nation’s biggest virus spike – to self-isolate for 14 days. Florida officials have said most of the people in the state who have contracted the virus recently traveled elsewhere or had contact with others who had.

The ties between Florida and New York run deep. New Yorkers are the biggest source of new Floridians. In 2018, the most recent year for which numbers are available, more than 63,000 New Yorkers migrated to the Sunshine State, close to double the residents of the next closest state, neighboring Georgia. On Tuesday, the federal government implemented the same order nationwide for those traveling from the greater New York City area.

The governor has taken some statewide measures, closing parks, bars and gyms; restricting visitations to nursing homes; and limiting restaurants to takeout and delivery. He also eventually decided to close beaches in two South Florida counties. Still, he has left many decisions up to counties and cities, an approach that has garnered praise, confusion and derision.

“Coronavirus is killing us in Florida, Gov. DeSantis. Act like you give a damn,” the Miami Herald declared on its editorial page over the weekend.

The Tampa Bay Times – normally considered one of the state’s most liberal papers – defended the governor, remarking on Monday that he had “struck a reasonable balance” in his efforts to control the virus and stop bleeding in the economy.

The newspaper argued that DeSantis has been unfairly criticized on cable news and social media “for his methodical approach to gradually implementing statewide restrictions” as opposed to the strict stay-at-home orders imposed by some other governors.

Business owners, meanwhile, are trying to keep track of the often-conflicting directives from DeSantis, as he tries to keep the economy as active as possible, and officials in Miami-Dade, Orlando and other counties who have ordered all but “essential” businesses to shut down.

“We have to flatten the curve to restore consumer confidence, then get back to business,” said Alex Marin, co-owner of the Hungry Pants restaurant in Orlando. “We can’t sail a sailboat when there’s no wind in the sails, so we’re just going to sit in the water until then.”

Mike Harting, the owner of 3 Daughters Brewing in St. Petersburg, said he thinks DeSantis has done a decent job so far of prioritizing the health and safety of residents, but would like him to help small businesses connect with banks.

“I appreciate his leadership,” Harting said. “Are any of these the right calls? I have no idea, and none of us will until this is done. He’s taking action.”

Harting said the state’s service industry was especially hard hit when DeSantis ordered all restaurants and bars to provide pickup or delivery service only – a decision he said he understood but that nonetheless forced him to lay off all 57 of his employees.

Speaking of the virus’s impact, Harting said, “The economic crisis that’s going to come behind all of this is just as big, if not more devastating.”

Mike Van de Abbeel, the owner of Mosaic Hair Studio in Orlando, echoed other business owners’ frustration with the patchwork of regulations.

For now, Van de Abeel has decided to remain open. He has placed a sink and hand washing station at the salon’s front door and is keeping customers more than 6 feet apart.

“It’s my job to stay open and stay employed,” Van de Abbeel said. “I’m trying to maintain a semblance of normalcy until I’m told we must close.”

DeSantis acknowledged these concerns this week, saying that on Monday, 21,000 Floridians filed for unemployment.

“Clearly we’ve got to do something about the virus,” he said, but “there’s no way a nine-month shutdown would possibly be sustainable.”

“Let’s protect the folks who could be in jeopardy,” DeSantis said. “Let’s get society functioning.”