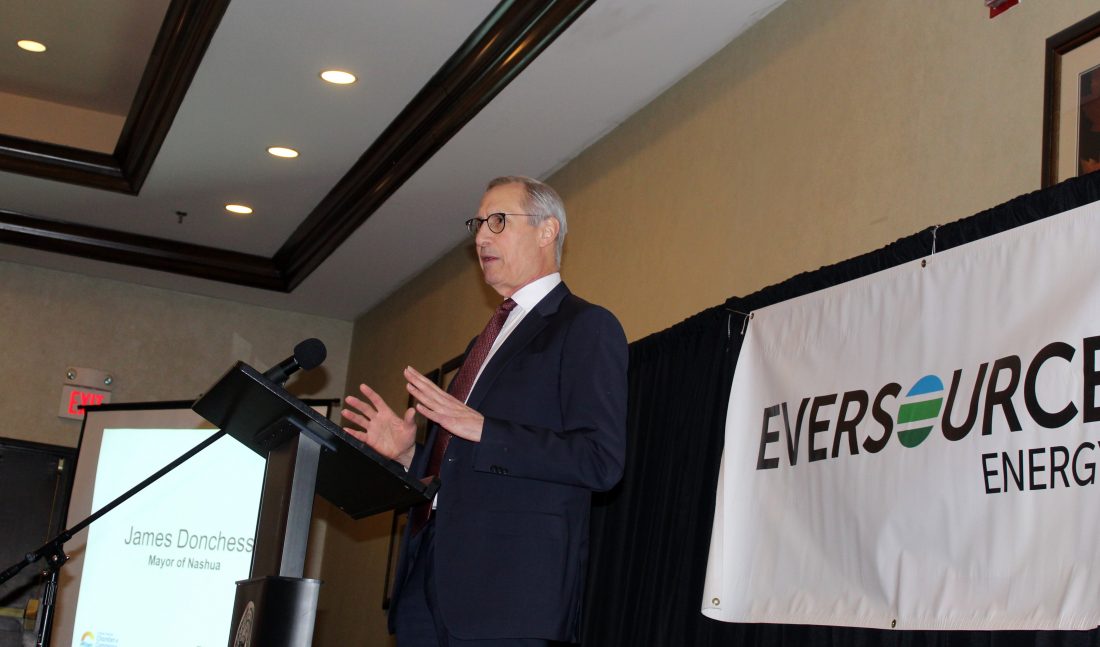 Telegraph photo by DEAN SHALHOUP Mayor Jim Donchess delivers this year's State of the City address Wednesday to members and guests of the Greater Nashua Chamber of Commerce.

NASHUA – The Gate City is not without its problems, as a burgeoning homeless population, streets scarred by potholes, allegations of public employees sleeping on the job, and reports of rogue tow truck operators are just some of the concerns community members express to The Telegraph.

Though Mayor Jim Donchess acknowledges the challenges, he sees far more good than bad in the city. He emphasized many of these high points during his 2020 State of the City address on Wednesday.

“Nashua is on the rise because Nashuans are working hard together to move Nashua ahead,” Donchess said. “In Nashua, we are intentionally building a thriving city. And I say together because in all that we do, my commitment is for more conversation, more cooperation, more collaboration and more common sense.”

Donchess delivered this address during a Greater Nashua Chamber of Commerce event Wednesday morning after giving a similar speech the previous evening at City Hall. The Wednesday speech took place at the Granite State Ballroom inside the Holiday Inn & Suites.

Four years ago, the city had no specific goals for reducing its carbon footprint. Today, plans are moving forward to combat climate change on a local level with a number of steps, including hybrid electric buses hitting city streets and solar panels popping up on the roofs of some municipal buildings. The city has also established a set of energy-reduction goals, including a 25% reduction in its carbon footprint by 2025 and full carbon neutrality by 2050.

While officials work toward meeting those goals, some initiatives currently in place are already making a difference. The city has converted all of the street lights to LEDs and secured ownership of their two hydroelectric dams (Jackson Mills and Mine Falls). Donchess also said officials have hired the city’s first Energy Manager, Doria Brown, to work on green projects; lobbied state officials in Concord for expanded net metering legislation; unveiled hybrid electric buses; worked with ReVision Energy to install solar arrays on the Lake Street Fire Station, the Transit Garage and the Conway Arena; added more charging stations for electric vehicles; and worked to expand the new Railyard District located east of Main Street.

“Over the next four years, we will work with our schools, with our fire and police departments and public works to reduce our carbon footprint,” Donchess said.

Other good news for the school district is the addition of five English Language Learner (ELL) teachers to help students speaking over 60 languages become fluent in English. Additionally, all of Nashua’s 5-year-olds are able to attend full-day kindergarten at all 12 of the city’s elementary schools.

Also, residents may have noticed some of their tax dollars being put to use during the warmer months of 2019 when crews were paving and sealing miles of city roadways. The city is currently in the midst of its city-wide, multi-year $41.5 million “Paving Plan of Action.” So far, Donchess said crews have repaved 70 miles and crack sealed 46 miles of the city’s 300 miles of streets, including Concord and Kinsley streets. While motorists are now traveling across these freshly paved streets, Donchess continues working on another form of transportation – that being rail.

“Commuter rail for Nashua and New Hampshire is critical as a means to a stronger, healthier economy, as a tool for our businesses to attract new employees and as a better alternative for Nashuans to travel to Boston,” Donchess said.

Other than bringing commuter rail north from Massachusetts, another way of building a successful downtown is through the arts. The Performing Arts Center, which is set for construction in the former Alec’s Shoes building at the corner of West Pearl and Main streets, recently received a total of $350,000 in commitments from Bank of America and Enterprise Bank. Once this project is complete, officials estimate 70,000 people will be drawn to downtown to attend performances annually. These patrons are also expected to spend money on dining and shopping while in the city.

Another way the city is aiming to attract people to Nashua is through the Nashua Riverfront Master Plan, which is already beginning to work toward revitalizing the riverfront with lighting, suspended walkways, landscaping and docks. Some of that work can already be seen while standing out on the Main Street Bridge with the brush and invasive species clearing, which allows for better access and visibility of the water.

“The city will soon undertake a project vital to the future of Nashua and we want to enlist the entire community in this important collaborative effort,” Donchess said. “Imagine Nashua 2040 will update the City’s Master Plan and create a 21st century urban vision for Nashua aimed at providing guidance and direction for the future development of downtown, of our unique neighborhoods, of our green spaces, our transit system and transportation options, the zoning maps and land use codes.”

While Donchess touted some of the city’s accomplishments and ongoing projects, he also acknowledges future financial challenges ahead with rising health care costs for city employees. These rising costs could result in people paying more in property taxes.

“This year, the city’s health care costs rose 11% or $3.3 million, and they will rise another $3 million next year,” Donchess said. “Our health care experts tell us that this trend will definitely continue.”

“So, we’ve done a lot over the last four years, but I know that Nashua’s best is yet to come,” Donchess added.