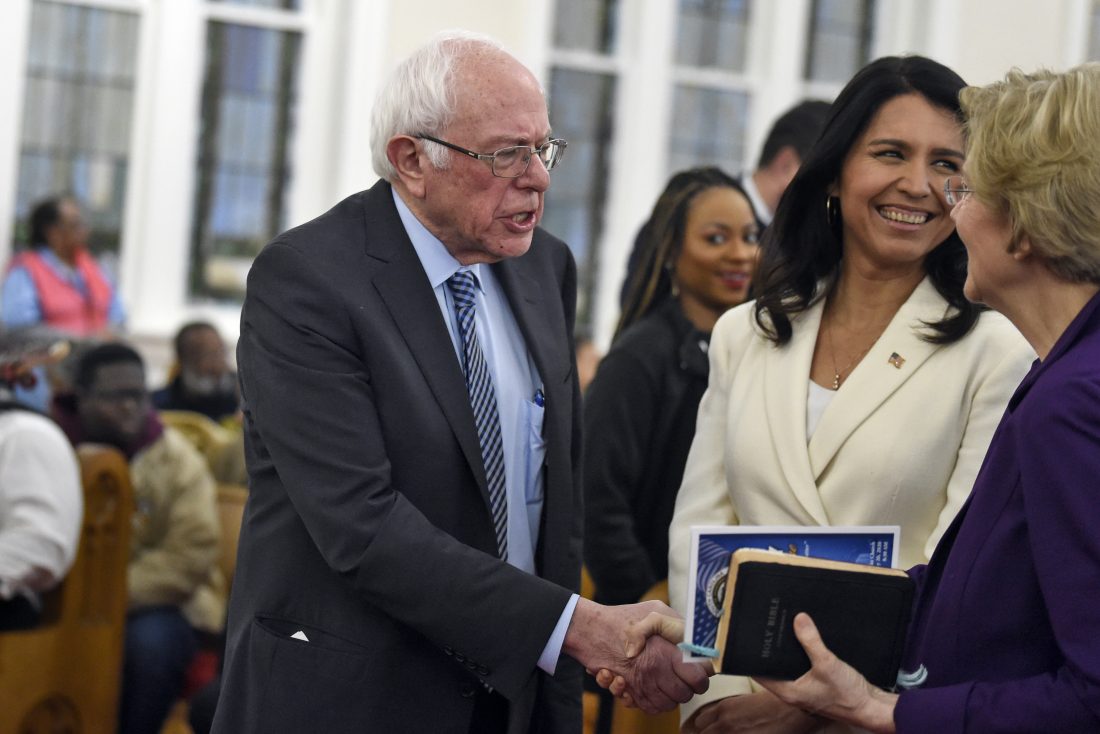 The Suffolk University/Boston Globe poll of 500 likely New Hampshire Democratic primary voters released on Tuesday showed that Bernie Sanders of Vermont, Joe Biden of Delaware, Pete Buttigieg of Indiana and Elizabeth Warren have a clear lead over the rest of the field, but the fact that 24% remain undecided gives the other candidates an opportunity to make up ground.

“Assuming no other candidates drop out, the bottom line is that, in an evenly split four-way race, 21% could be good enough to win New Hampshire,” Suffolk University Political Research Center Director David Paleologos said.

“This finding of strong loyalty to the lower-tier, boutique candidates suggests that 20% of the likely vote pie could be off the table for the top-tier candidates,” he added.

Those so-called “boutique candidates” appear to include Amy Klobuchar of Minnesota, Tulsi Gabbard of Hawaii, Andrew Yang of New York and Tom Steyer of California.

Suffolk University also polled 500 likely Granite State Democratic primary voters in November. Below will be the January results as compared to those of November.

“Elizabeth Warren’s support has tanked because of men leaving her camp,” Paleologos said. “However, despite last week’s dustup over whether or not Sanders told Warren a woman couldn’t win the presidency, 78% of those polled said a woman could beat Trump, and other female candidates like Gabbard and Klobuchar are getting more male support than female support.”

Therefore, the winner on Feb. 11 seems destined to emerge from the top four of Sanders, Biden, Warren and Buttigieg. The front-runners continued their battle against President Donald Trump on Tuesday, with each competitor looking for the advantage.

“The top 1% own more than twice as much wealth as the rest of humanity combined. We live in a world where a handful of billionaires have extraordinary control over the economic and political life of the global community. I don’t think that’s the world we should be living in,” Sanders stated via Twitter.

Biden and Sanders have regularly clashed over the $20 trillion – or as Biden claims, up to $40 trillion – Medicare for All plan along the campaign trail. Biden opposes this based on cost, as well as the fact it would eliminate private health insurance.

“Make no mistake, Obamacare is on the ballot this November. Coverage for millions of Americans and protections for pre-existing conditions are on the ballot. We have to protect the progress we’ve made and show up to the polls to defend the Affordable Care Act,” Biden tweeted Tuesday.

Warren, who over the weekend won an endorsement from The New York Times, continues the fight.

“This election is about power and who needs more of it. That’s why you won’t find me behind closed doors sucking up to rich donors. I spend my time in town halls and selfie lines–and those are the conversations I will carry with me to the White House,” Warren tweeted on Tuesday.

Buttigieg also continued his effort. Via Twitter, Buttigieg thanked his New Hampshire campaign co-chairs: “Thank you to @maurasullivan, Suzanne Prentiss, Sheriff Rivera, and Jennifer Frizzell for your endorsements and your support as our New Hampshire Co-Chairs. Looking forward to working with you all on the campaign trail!”