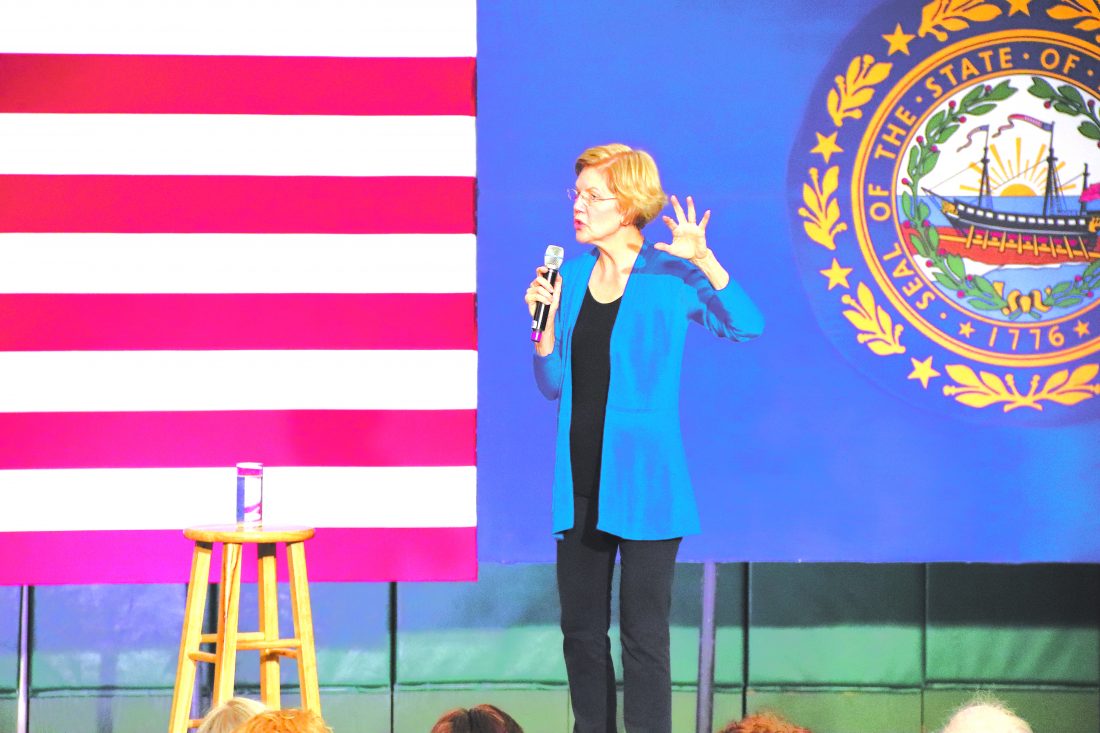 MILFORD – As Dolly Parton’s “9 to 5” careened through the speakers, 2020 Democratic presidential hopeful Elizabeth Warren of Massachusetts took the stage on Friday for a town hall-style event at the Hampshire Dome at Hampshire Hills Athletic Club and Event Center in Milford.

Earlier on Friday in Dover, an angry man disrupted a Warren rally, calling her a “fraud” before he exited the building. The Milford discussion went on without interruption.

After briefly discussing her upbringing in Oklahoma and her background as a young mom, a schoolteacher and a law professor, Warren momentarily shifted the conversation back to climate.

Since she announced her intention to vie for the 2020 Democratic presidential nomination on Dec. 31, 2018, Warren’s message of anti-corruption has been a recurring theme at her rallies.

Warren discussed that corruption is about money, and that money is “felt in lots of different ways.” She added that she would “end lobbying as we know it.”

“Block the revolving door between Wall Street and Washington,” she continued. “You really want to hose out some of the corruption in Washington? Make everyone who runs for federal office puts their tax returns online.”

Warren’s contention is that the government should work for the people and not the other way around.

When the format switched to a question and answer session, as a young voter asked about the correlation between the U.S. military actions and world pollution.

Warren added that she supports American troops, saying she would ensure they’re paid fairly and receive their housing allowances “on time,” and that they receive the medial care they’re entitled to by the Department of Veterans Affairs.

Warren drew a mixed reaction from the crowd when she said she would cut the military budget.

“I support our troops,” she clarified. “But, let’s get rid of the lobbyists who are running the Pentagon and the Department of Defense. To give you an example of what’s going on, the current secretary of defense had an earlier job — seven years as the chief lobbyist for one of the biggest defense contractors in America.”

“Having to maintain supply lines that get diesel fuel and oil to the places where our troops are located is one of the most dangerous parts of being there,” she said. “Going green — being able to be more energy independent, through solar or wind, actually makes our troops safer. General after general has told me this. And as our military goes green, they provide a ready market for everyone who is producing for the military. And that will help stimulate more green production.”

“Big structural change is hard, but it’s the right thing to do,” she said. “I’m running a campaign based on the heart. I believe that 2020 is our moment in history‚ up or down. We need to get in the fight. We need to win the fight for a Green New Deal and save our planet. And this is our year to dream big, fight hard and win.”