Affordable housing on the horizon 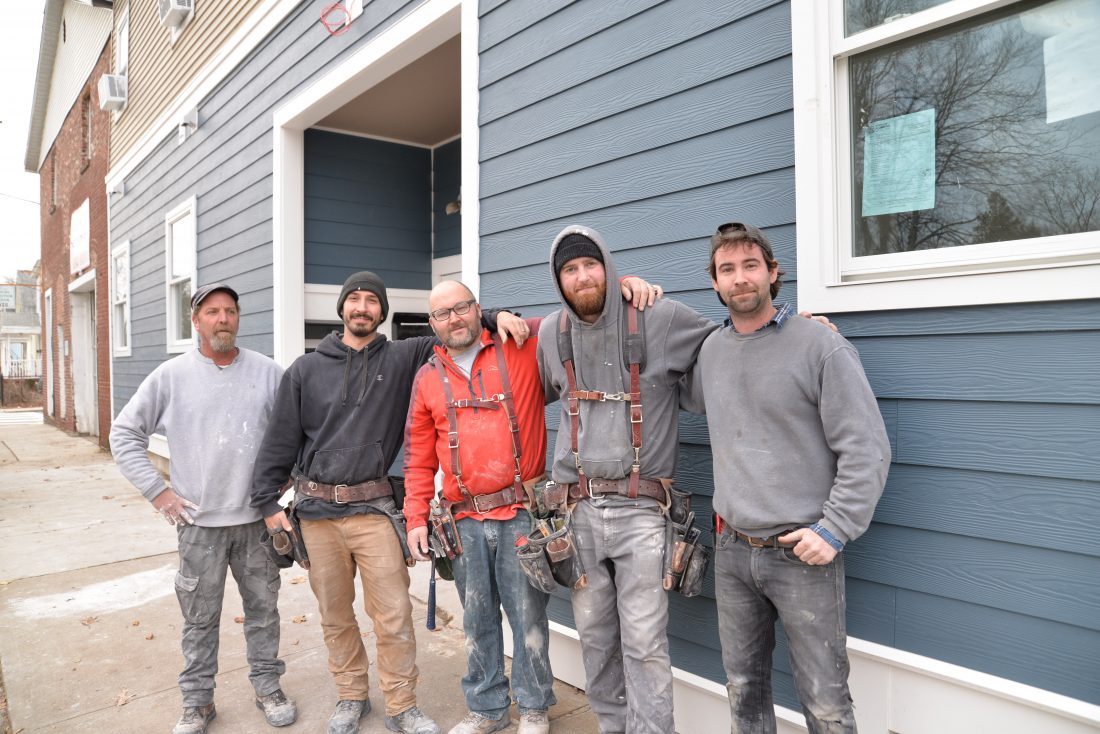 Telegraph photo by ADAM URQUHART Workers with Keating Contracting pause from rehabilitation work on the first floor of 49 Harbor Ave. to pose for a picture in front of what will be rehabilitated into a 15-unit building of affordable housing in the next month or so. Conor Keating, Mark Mangano, Blake Brogan, David Morin and Tim Sullivan are among the workers on the job Wednesday.

NASHUA – As part of the ongoing battle against homelessness and the tight housing market, a new affordable apartment project is on the way to the corner of Harbor Avenue and East Otterson Street – spearheaded by Kyle and Erin Worth of Nashua Adult Day Health.

The property at 49 Harbor Ave. is currently being rehabilitated, with the second floor already finished and first floor renovations ongoing. Rents for these units will start in the $700 per month range, which in Nashua, is below market rate, according to Mayor Jim Donchess.

There will be a total of 15 units, 10 on the second floor and five on the first floor, which will add to the supply of affordable units in the city, while also seeing a renovation of the building in the Crown Hill neighborhood simultaneously.

“In any neighborhood, getting an older building fixed up is a plus,” Donchess said. “A neighborhood is improved building by building and this is definitely a project that will add to the neighborhood.”

The building formerly featured commercial space on the first floor, with residential space on the second floor. However, Donchess also said the building was in very bad shape when Kyle and Erin purchased it. The couple saw this building as a really low point in the neighborhood compared to other buildings surrounding it.

“We noticed this building had been underloved for a little while,” Kyle said.

The two had a health care facility geared toward seniors in Hooksett, New Hampshire for four years before selling it in August 2018 and opening their new facility in Nashua. It took about a full year to open, get licensed and insured. They started serving members in Nashua in July.

“The relation to that is with rent continually increasing 10% to 20% per year, many people on fixed incomes were being forced out of where they were living currently,” Kyle said.

In recognizing many seniors live on fixed incomes, they wanted to have a place with their new program to help those seniors. These units are not a part of Section 8 or subsidized, officials said: They are just affordable housing units.

Kyle said housing can play a major role in a person’s well-being. He said oftentimes, if someone is embarrassed of their housing situation and living in poor conditions, their health will mimic that.

Now, the conditions at the building are already improving. Kyle said that first floor space was zoned for commercial, but ended up sitting empty for years. This posed a safety hazard because it was both filled with junk, as well as being an easy target for squatters.

There are just a few weeks left until the project should be ready, officials said. On Wednesday afternoon, Massachusetts-based Keating Contracting had crews inside working on the first floor. The 10 existing units are all full, with just a few units available in the 15-unit structure. Once the first floor units are ready to go, Kyle said they they will prepare to let people move in by Jan. 1.