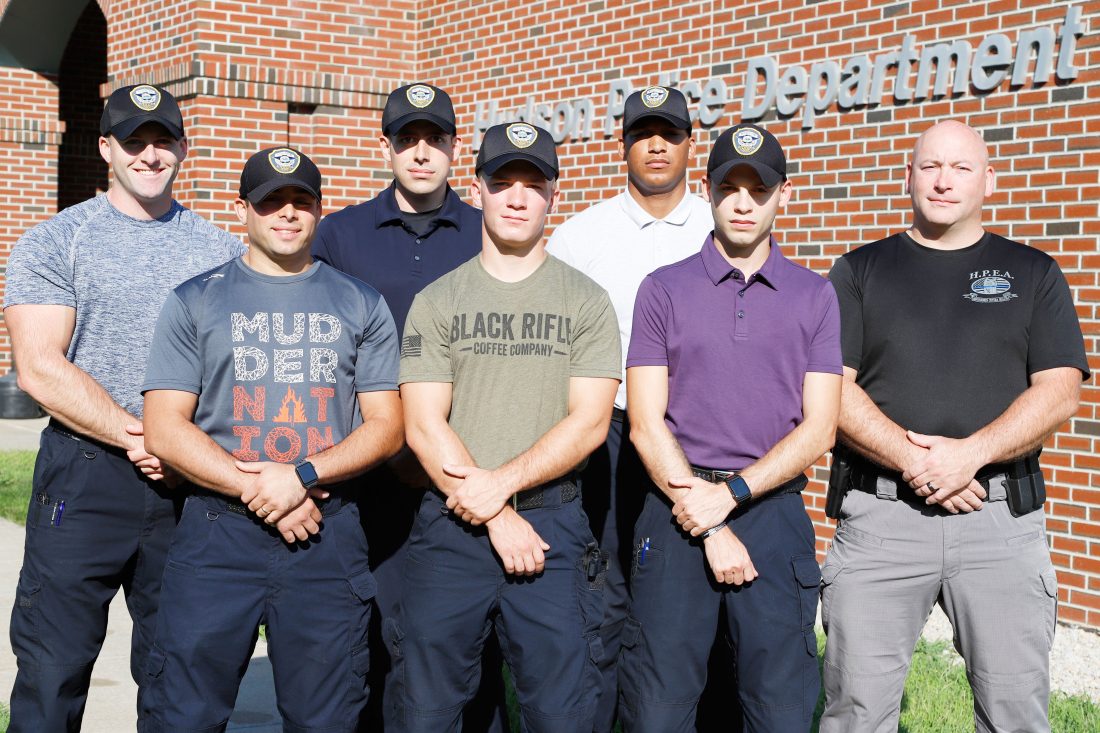 HUDSON – While in the midst of a five-week program at the Hudson Police Department, fresh recruits have been learning the ropes of law enforcement, all with the goal of preparing for the New Hampshire Police Standards and Training Council in Concord.

During their current training program, they have been going to work every morning to take part in certain physical and tactical training in preparation for some of the more difficult aspects of the academy, including firearms, combat training, defensive training, as well as the practice of using non-lethal force.

“I feel like it is a mini-academy, almost,” Greyson said of the Hudson program. “We’re kind of getting a little bit of everything. We started off with defensive tactics. We’re going to the range. We get first aid and driving training next week.”

While the department is not required to provide such pre-training for their new recruits, they officers agreed the experiences they are gaining will give them an edge once they step into the academy.

“They’re giving us the training in the materials that, when we get there, is the hardest, what people struggle on,” Hoag said. “Firearms: Some people go there and have never held a gun before, so us getting firearms training, getting hands on combative and defensive tactics training, getting exposed to O.C. (pepper spray) and Tasers.”

“So, it kind of gives us a leg up when other people are going in having never experienced it before,” he continued.

Whereas Hoag, who has a military background, said he has been through basic training, his fellow recruits are currently being prepared for a very similar experience at the academy, something many of them received prior to their training.

“I think the biggest positive here for these guys — they haven’t experienced a basic training,” Hoag said. “It’s giving us a chance to get together early in the morning to work out together, then go through classes and learn new material that some of us, or none of us, have been exposed to.”

One of the recruits, Horton, said he has no background in law enforcement. Therefore, he believes pre-training will play in his development toward a career.

“Some of us come from a background that has nothing to do with police work. I was a bookstore manager, so I have been exposed to none of this prior- it’s interesting,” Horton said. “I’m really happy they did this.”

While each recruit said his is enjoying the bulk of the training, everyone agreed some of their experiences were not as desirable as others. The pepper spray and Taser training are most notable for being unpleasant.

“It’s definitely a negative experience — it definitely hurts, it hurts big time,” Sosa added. “It gives you the knowledge of what you do when you get exposed to it and how to deal with someone if you use it.”

Training officials at the department said they have been pleasantly surprised with the group of new faces since they started the program on July 29.

Citing a nationwide trend in which police departments are having difficulty replacing retiring officers with new officers, Lamarche said it is a luxury that Hudson officials were able to find the current group of recruits – especially since the pool of candidates was not a large one.

“Law enforcement across the board is hurting as far as trying to find viable candidates that want to come out and do this career,” Lamarche said. “To have six quality candidates like we have come in, and our standard in Hudson, we try to set the bar very high, to have a crop of officers like this as recruits, I’m pleasantly surprised.”

With the recruits continuing their pre-training until they head off to the academy, Lamarache said he is proud of the progress they have made. Above all, he is glad to be working with the group, which he described as outstanding.

“At the end of the day, they’re good guys,” he added. “We can take good people and make good officers. That’s what we have here, really outstanding individuals working together.”