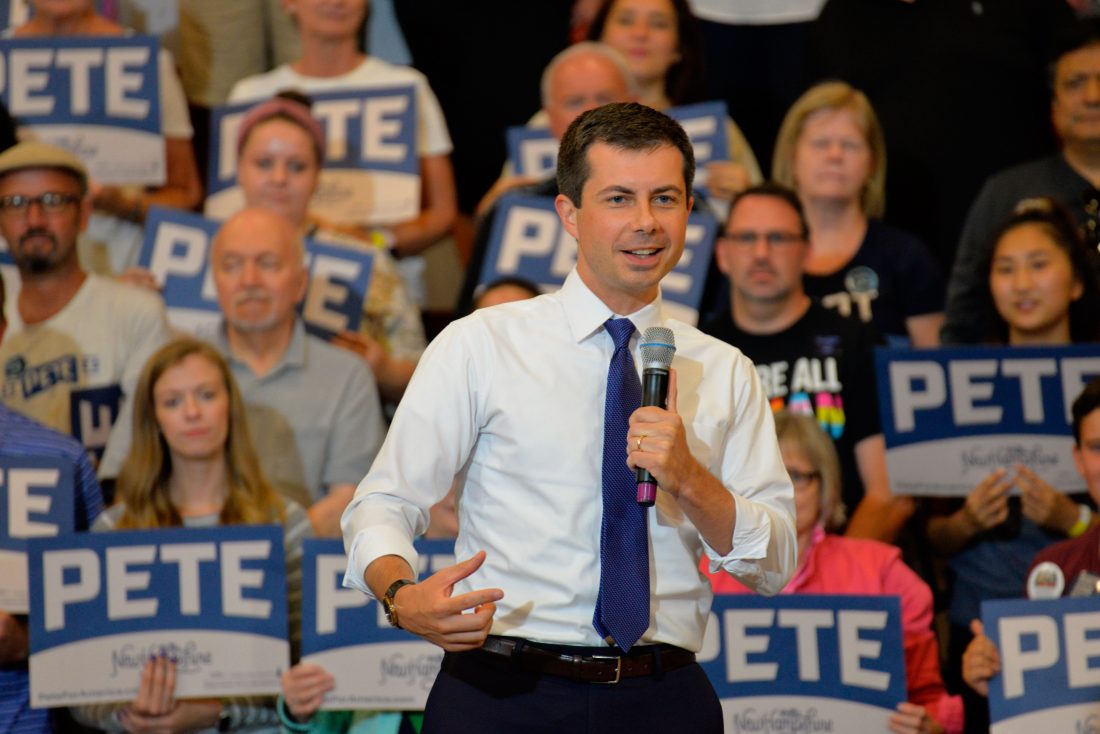 “Let’s put an end to the idea that patriotism belongs to one side of the aisle, especially these days,” Buttigieg said. “We gather under a flag that is not a Republican flag, but an American flag.”

This is the military combat veteran’s ninth visit to New Hampshire, and is part of his three-day swing through the Granite State. His address drew hundreds of spectators to the NCC gymnasium.

The latest New Hampshire Democratic presidential poll shows Buttigieg in fourth place in the state widely known for its first-in-the-nation primary, as he trails only Bernie Sanders, Joe Biden and Elizabeth Warren.

While the gym was packed with people sporting “Mayor Pete” T-shirts and wielding his campaign signs, he spoke to a range of issues, including health care coverage and climate change, as well as national security.

Buttigieg said if people are seriously about security, to treat climate disruption as the security challenge of our time, both nationally and globally. He said the world’s climate is losing its ability to support life because of coal, oil and natural gas extraction.

Regarding the ongoing wars in Iraq and Afghanistan, Buttigieg said it is past time for them to end.

“I thought I was one of the very last troops leaving Afghanistan five years ago, and right now, there’s a soldier packing her bags, ready to go over there, probably wondering a little bit what the end game is and what the mission looks like,” Buttigieg said. “So, I believe a big part of this has to be for Congress to step up and as president, I will insist on congressional authorizations before committing troops on the ground in that way.”

Buttigieg said this is a time when national security requires more from us than ever before, citing examples such as cybersecurity and election security that are not going to be addressed by President Donald Trump’s demands for a physical wall at the southern border.

“There’s a lot more to keeping America safe at a moment when one of the things that endangers our lives is White Nationalist violence that needs to be called out as such, and fought by the United States of America,” Buttigieg said.

He said freedom and security do not belong to a political party, just as God does not belong to a political party either. He said if the nation’s troops are able to summon the courage to go overseas and put their lives on the line for their country, than members of Congress should have the courage to take tough votes on whether it is appropriate to send them there in the first place. This is why on the topic of security in the age of endless war, he said from now on, authorizations for war ought to have a sunset.

That way, if a president really needs to keep troops deployed, he or she should have to go back to Congress every three years and make the case. He said Congress should also be ready to step up.

This idea later came up during a question and answer session in which audience members had written questions down that were than plucked from a fish bowl on stage. An audience member had asked if Buttigieg believes a president should always get the consent of Congress explicitly to undertake military action?

“Part of why we are where we are, is that I think Congress walked away from its war powers, and so I would build in a three-year sunset for every authorization for the use of military force,” Buttigieg replied.

Furthermore, he said his campaign is to be the one that breaks the spell that has people believing that the word “values” is automatically a Republican word. He stood before the audience and said he is talking about American values. He said if people are serious about freedom, in the Live Free or Die state, then policies are needed that recognize that there is more to freedom than allowing big banks and pharmaceutical companies to run roughshod over average Americans.

This is why Buttigieg is also proposing what he calls “Medicare for All who want it.” He said this would gives people the freedom to chose a publicly provided Medicare option, which he believes will be a lot better than any of the corporate options currently out there. He said this will move the country toward universal health care coverage.

“You’re not free if you don’t have health care coverage. It holds you back from living a life of your choosing,” Buttigieg said.