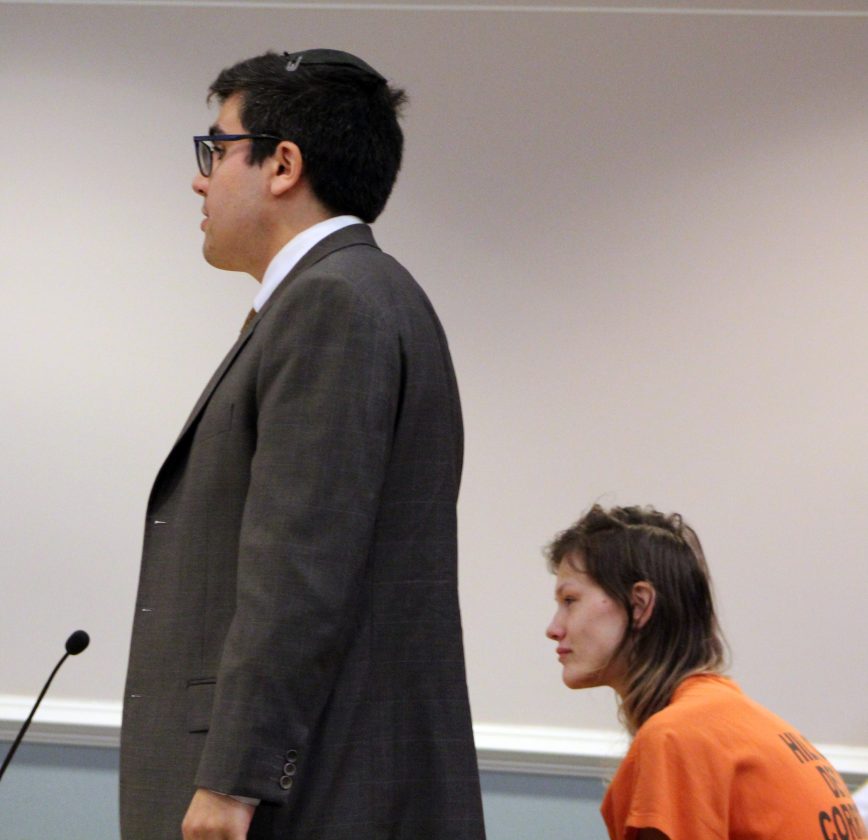 Telegraph photo by DEAN SHALHOUP Samantha Iodice listens in court Tuesday as her attorney, Elliott Friedman, addresses Judge Charles Temple during Iodice's bail hearing on felony assault charges. She is accused of stabbing a man over the weekend.

NASHUA – A Superior Court judge Tuesday set prompt mental health treatment as a priority for Samantha Iodice, the local woman who allegedly stabbed a man in downtown Nashua during the weekend, then reportedly stated “it tastes good” while licking the knife.

Iodice entered not guilty pleas and waived formal arraignment Tuesday in Hillsborough County Superior Court-South. At a subsequent bail hearing, Iodice, who became tearful and appeared distraught while speaking with her attorney about the prospect of going to jail, said she “just wants to get out” to be with her 2-year-old daughter.

Asked about medication, Iodice told the court her supply “ran out three or four days before this,” referring to Sunday’s incident.

Friedman asked Temple for personal recognizance bail for Iodice, with the condition she be ordered to immediately seek mental health treatment.

It was Iodice herself who recently “put herself into treatment,” Friedman said. “She knew something was wrong.

“In the long term, the thing to do is make sure she continues to get treatment,” Friedman added.

Assistant County Attorney Brett Harpster, the prosecutor, recommended Temple order Iodice held on preventive detention, noting the rather bizarre nature of the allegations and his concerns for the safety of the alleged victim if Iodice is released.

“She was angry because he sipped some beer … she (allegedly) stabbed him in the shoulder,” Harpster said. Iodice “candidly admitted” to the allegations after police arrested her, and allegedly told them “she did not intend to kill him … she only wanted to stab him ‘a couple of times’ to make him whine …,” he added.

“I do not disagree with Attorney Friedman” that Iodice needs mental health treatment,” Harpster said, “but she clearly presents a danger to the safety of (the alleged) victim, and the safety of the community.”

Temple, after considering the attorneys’ arguments, said he found probable cause to support the first-degree assault charge, and agrees with Harpster that Iodice’s release would “constitute a danger to the safety” of the alleged victim.

“However, I don’t want to warehouse you,” Temple told Iodice, referring to a lengthy stint in jail. He therefore scheduled a review hearing for Thursday, and asked Friedman to contact a representative of Greater Nashua Mental Health Center for an opinion “on where you are now, and what we need to do,” he told Iodice.

Temple said he would consider personal recognizance bail once a treatment plan is in place for Iodice.

When she is released, Iodice is ordered to have no contact with the alleged victim, who police said was treated at a local hospital following the incident.