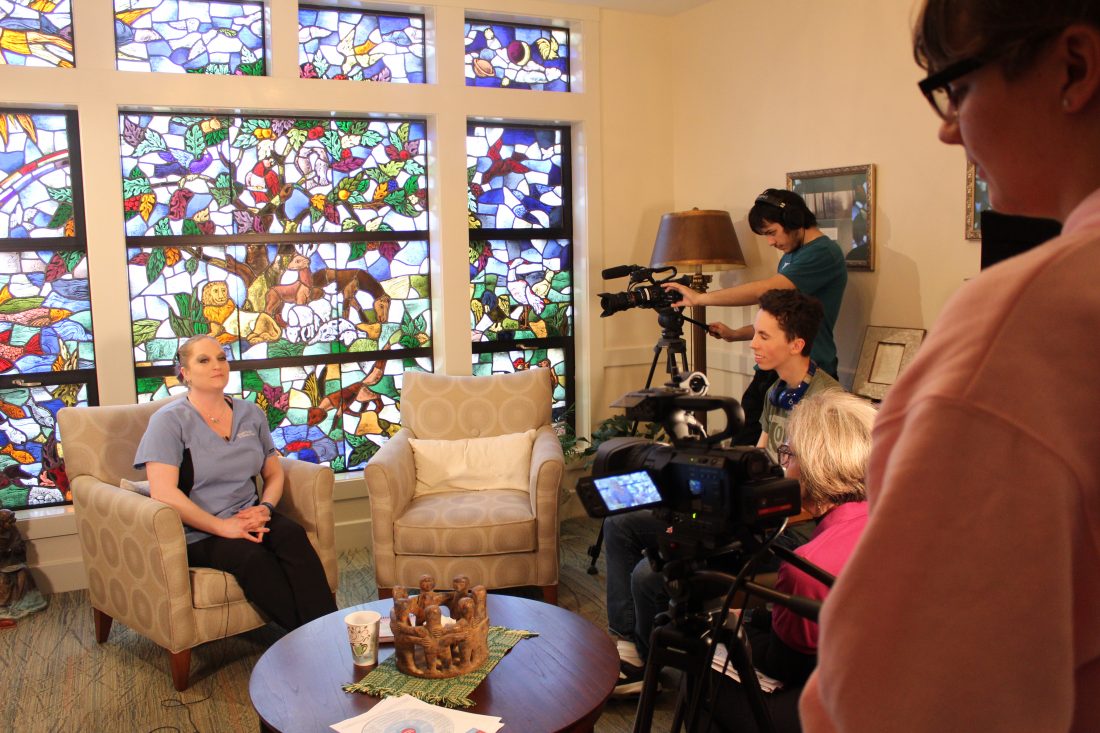 NASHUA – Nashua High School South Video Production and Broadcasting students got out of the classroom for a taste of the real world on Friday for their class project.

The work took them to Home Health & Hospice Care’s Community Hospice House in Merrimack. This is the second year students from the school have partnered with those at the hospice center. Last year, students created videos about pain medication.

Volunteer Kathy Hopkins, RN, got this partnership started. Hopkins said she was shopping one day and ran into a friend. They discussed the idea of making videos for families of patients to watch. She asked if her friend knew of any video production programs at Nashua Community College. Her friend did not, instead pointing her to Jeff Leone, who serves as Video Production and Broadcasting instructor at South.

Hopkins said almost immediately, a plan was put to action.

“I love seeing young people learning and being involved,” she said.

For the videos, Hopkins said one of the main messages they are trying to convey to their patients and families is that they are not alone – there will always be support.

Hopkins challenged the participating staff members not to follow a script for their interviews so that they could be speaking from their hearts about why they really got into the field.

The students spent Friday filming for two videos they will produce for their spring project.

In fulfilling classroom requirements, Doug Beals, Leone’s counterpart, said the seniors have two major projects to complete. In the fall, they are required to create a film which is sent to the New Hampshire Film Festival. In the spring, they create a community project.

For their project, seniors Josh McElhinney, Gabe Miranda, Jack Miller and Jasminn Nickerson shot footage for two videos they will be creating. The first one is called, Care for the Bed-bound Patient. It is for parents and their families to watch to learn how to turn a patient who is bedbound.

The second video is all about hospice care, as it will show what hospice care is. Employees were interviewed for this video, and it is also serving as a way to show the circle of care in hospice.

This project benefits students in more ways than one. Beals said, not only is it good for community service in terms of giving back, but, it also gives them real-world experience because they have to work with a client. They have to create, edit and deliver a final product to their client, Beals said.

“It’s kind of like a taste of the real world. It’s been really cool and exciting,” McElhinney said. “It was a very good learning experience being here too.”

Miranda said he believes his classes at South have really helped him prepare for this.

“You use basically everything you’re taught in every matter of what you’re doing. Most of what we have done here is the fundamentals and a little bit of more advanced stuff that we’ve been taught,” Miranda said. “This class has been great. I’ve used even what I learned in a general sense out of context of the class, the whole idea of pre-production, production and post-production.”

“This class taught me a lot more than just being behind a camera,” he added.

Miller said his education through the video production and broadcasting program has been great and that he wouldn’t have been able to do this project without it.

“I think it’s really cool to apply what we’ve have learned in class, whether it be things we learned our first year or the more advanced topics,” Nickerson said. “It gives us a better sense of what it’s going to be like working in the real world after high school.”

In addition, she said members of her group worked well together.

“We’ve worked together so many times. We are all very comfortable with each other and we all get a feeling of each other’s strengths and weaknesses, so we can kind of balance them out and designate jobs for everybody,” Nickerson said.

The students will have their videos finalized and ready for viewing at the end of May.