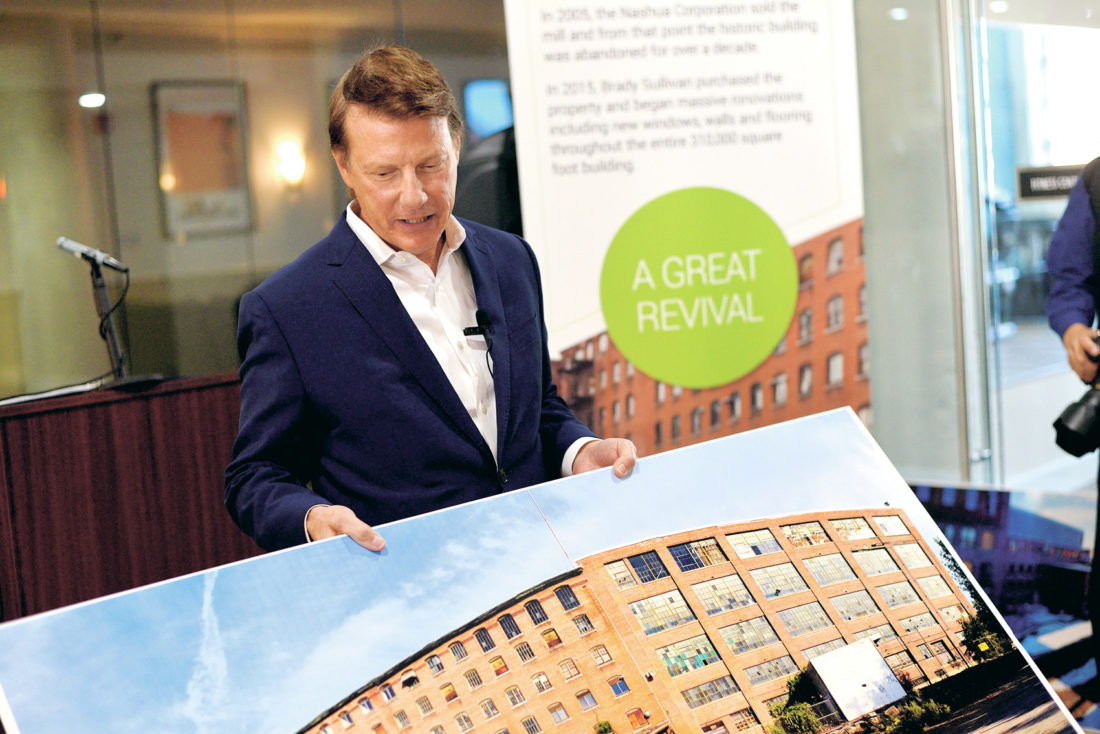 This massive brick building along the Nashua River housed the Gummed & Coated Paper Co. during much of its history, which began in 1889. Along with the Clocktower Place and the Cotton Mill, the city continues to see former factory properties become apartment buildings.

“One of our goals in Nashua is to bring as many new people downtown as we possibly can, and this is a tremendous addition to the city,” Mayor Jim Donchess said during a Thursday tour of the new complex.

“This will contribute 200 units to Franklin Street and is one of the biggest projects in downtown Nashua in the last 100 years.”

“On behalf of our entire team at Brady Sullivan, we are thrilled to announce the grand opening of our newest project – Lofts 34 in Nashua,” Brady Sullivan President Arthur Sullivan stated Thursday.

In honoring the building’s history, officials draped a massive American flag down the side of the mill. Arthur Sullivan said this display endeavors to be a tribute to those labored in the building during its decades as a factory, in addition to celebrating Veterans Day on Sunday.

Manchester Historic Association and Millyard Museum Executive Director John Clayton said the great flag is a replica of a flag that was made in Manchester in 1914.

“To me it represents the fabric of the textile industry here in New Hampshire,” Clayton said.

“Twenty-two buildings have been redone by Brady Sullivan. That’s 22 buildings that were rescued from the demolition ball,” Clayton added.

After purchasing the abandoned building in 2015, contractors working on behalf of Brady Sullivan began extensive renovations. Officials said hundreds of local carpenters, painters, drywallers, plumbers and electricians were employed. The renovation consisted of hanging over 35,000 sheets of sheetrock, installing 600 new windows and installing more than 100,000 square feet of new flooring.

“Sometimes you think you’ll never get to the end, and when the outcome is better than you expected, it makes it even more special,” Sullivan added.