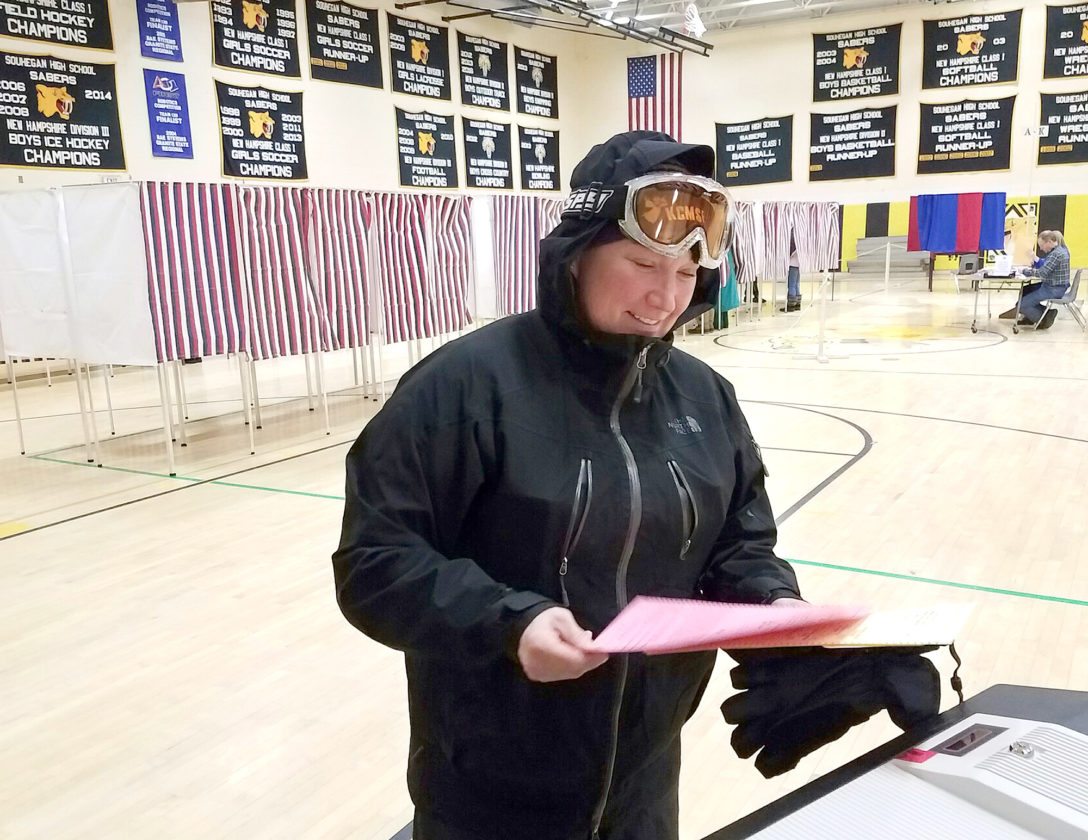 Voters in area towns are once again preparing to go to the polls and do their civic duty while keeping a wary eye on the regional weather forecast.

While most indications favor a repeat of last year’s scenario, given the predicted timing of the region’s third Nor’easter within two weeks, the state Senate is hoping the bill they passed last week will eliminate the confusion that arose amid the blowing snow in 2017.

The bill, passed on Thursday, leaves it up to the secretary of state to make the call whether to postpone town elections in the event of an emergency – such as a big snowstorm that causes dangerous travel conditions.

A provision in the bill, however, allows the town moderator to make that decision if state officials don’t respond with a decision within four hours.

Whether elections and the scheduled town meetings take place Tuesday or on a future date, residents will make their decisions to approve, or not approve, proposed town and school district budgets and a number of other articles on the warrant in their particular towns.

Merrimack, which for years has held Election Day in April, is not included in this report.

A proposal to spend $1.5 million on the widening of Lowell Road between wason Road and the Sagamore Bridge is among the top articles on the town warrant, along with a $350,000 request to hire four Fire Department members – 75 percent of which would be covered by a federal grant.

On the school side, Alvirne High School and its technical center would undergo major renovations if voters approve warrant articles asking for a total of $47 million, with as much as one third of the total coming from grants.

Voters will also decide whether to bring Keno to Hudson.

Contested offices: Board of Selectmen – candidates Chad Pinciaro and Steve Webber running for one open seat.

Residents are not voting on Keno, but will decide whether to spend about $3.75 million to build an 11,000 square foot fire station on a site the town already owns. Also up for voter review is the proposed $6.1 million operating budget, along with an article asking for $41,000 to hire an additional police officer.

The school district, meanwhile, has proposed a $22.3 million operating budget to voters, who will also decide whether they want full-day kindergarten at Griffin Memorial School.

School Board – candidates Ron Carvell and Susan Kater running for one open seat.

Along with a $14 million operating budget and a $3.86 million fire house upgrade, Milford’s town ballot has a total of $325,000 for various capital reserve accounts, a replacement sidewalk plow for $155,000 and numerous smaller articles, including ones to support the Blue Bus service, the Pumpkin Festival, social service agencies and parades. There is also a petition article for fireworks.

If all the town proposals pass, the tax rate would actually go down by 27 cents.

Keno is up for a vote as well.

On the school side, the chief spending items are a $41 million operating budget and a full-day kindergarten program for $582,500. If all school articles passed it would mean a tax rate hike of 57 cents per thousand of assessed valuation.

Souhegan School Board – David Chen and Martin Goulet running for one open seat.

The town operating budget of $13.9 million is up 3.37 percent. There are also capital reserve articles for fire and rescue vehicles, police station expansion and bridge repair and replacement. If all three money-related articles pass, it would raise the tax rate by 46 cents.

The Amherst School District, which includes the elementary and middle schools, has a $26 million operating budget, collective bargaining agreements with support staff and teachers, a $550,000 article for sepetic system repairs at the Clark School and $310,000 for replacing plumbing at the Amherst Middle School.

For the Souhegan Cooperative District, there is a $17.8 million operating budget that is 2 percent lower than last year’s, a joint collective bargaining agreement with professional and support staff and a $150,000 article for architectural and engineering fees for building upgrades.

For Souhegan, the estimated tax impact of all articles would be 14 cents per thousand. For the Amherst School Districtti would be $1.11.

Keno is not on the Amherst ballot.

Mont Vernon operates with a traditional meeting, but its Village School District is under Senate Bill 2 ballot voting rules.

On the town meeting warrant are two articles relating to a new building for the Daland Library. One is to withdraw $45,000 from the library capital reserve for engineering-architecture fees for preliminary plans for a new library on town-owned property next to Carleton Pond. The other one is for $105,000 to buy the Daland building (the town owns the land) from its trustees.

The Mont Vernon School District, meanwhile, has a $5 million operating budget on the warrant and a three-year teachers contract that would cost $80,000, while eliminating the most expensive health insurance plan and adding stipends for after-school activities.

Contested offices: Board of Selectmen – Michael Bergeron and David Petry running for one open seat.

On a warrant article brought by petition, voters will weigh in on whether to adopt the so-called SB 2 format for the School District, which if approved would replace the current School District meeting format.

Come Saturday, voters will discuss a dozen articles on this year’s town warrant, including a proposal to purchase for $860,000 roughly 20 acres of land known as the Siergiewicz property, for the purpose of building playing fields.

While the Board of Selectmen voted to recommend the passage of the article, the town Budget Committee is not recommending its passage.

Also up for vote is a collective bargaining agreement for the union that covers police, fire and communications employees. It calls for just over $100,000 for the current fiscal year to cover salaries and benefits required by the contract.

Keno is not on the Hollis ballot this year.

Brookline voters will also choose whether to adopt the SB 2 form of government for both the town and the School District. If passed, the measure would “allow official ballot voting on all issues before the town” in place of the town meeting and School District meeting format.

The school side also has a number of additional articles for voters to consider, including a pair of collective bargaining agreements. One would appropriate just over $150,000 to fund the first year of a two-year contract for the Brookline Teachers Association,

while the other would raise about $40,000 to fund the first year of the contract with the Brookline Education Support Staff Association.

The proposed school district operating budget comes in at just over $9 million, and has the unanimous support of selectmen and the finance committee.

Wilton and Lyndeborough still vote at traditional annual town meetings in which voters debate, discuss and vote on their town budgets and other items.

Lyndeborough town meeting is at 10 a.m. Saturday, March 17 in Citizens’ Hall. Among the 10 articles are ones to pave the parking lots at Citizens’ Hall and the J. A. Tarbell library.