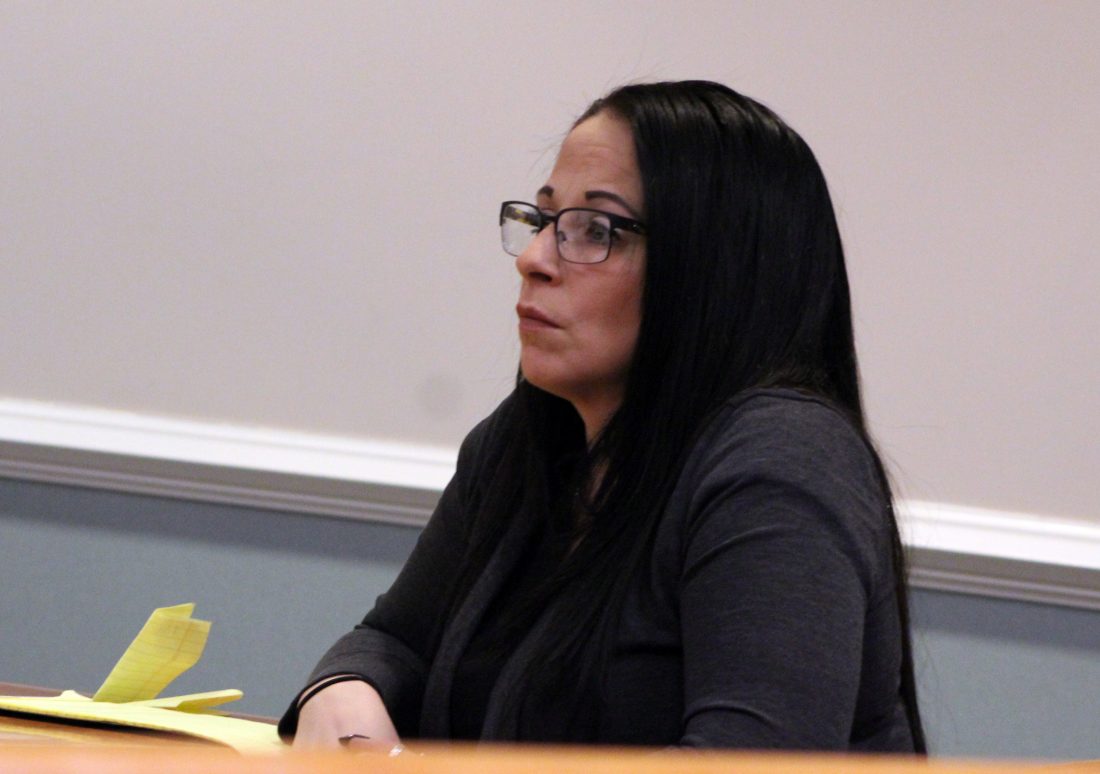 Telegraph photo by DEAN SHALHOUP Christine Fernandez, who is on trial on accusations she stole and pawned a family member's heirloom ring, listens to testimony on the first day of trial Wednesday.

NASHUA – When Christine Fernandez found a roughly $1,500 ring in the bathroom of her Litchfield home back in 2017, she asked around to see if she could figure out who it belonged to, one of her attorneys told a Superior Court jury Wednesday.

Fernandez “made a reasonable effort to find the owner,” attorney Elliot Friedman said, adding that she sought the owner for about a month before she decided to pawn the ring at a Manchester shop.

But when the owner of the ring – a family member with whom Fernandez, her husband and three children shared the Litchfield residence – asked Fernandez about her missing ring, Fernandez allegedly said she knew nothing about it, Assistant County Attorney Lisa Drescher countered.

According to Drescher, Fernandez is charged with two theft-related offenses because she took the ring from the family member’s bedside table after the family member took it off then forgot to put it back on the next day.

The trial, which got underway Wednesday before Judge Charles Temple, will resume Thursday at 10 a.m., and testimony is expected to conclude by the end of the day.

Fernandez, 38, faces one count each of theft by unauthorized taking and theft of lost or mislaid property, which are felonies because the value of the ring she is accused of stealing is greater than $1,500.

Friedman, who is defending Fernandez with attorney Eleftheria Keans, said the case is all about “trying to turn a misunderstanding into a crime.

“Bottom line, what happened is, Christine found a ring, tried to find out who it belonged to, wasn’t able to find out, so she pawned it,” Friedman told the jury.

But Drescher said Fernandez asked the alleged victim if she was missing any jewelry – not, specifically, a ring.

The alleged victim, who was the first witness to testify Wednesday, told the jury she remembered taking the ring off and putting it on the bedside stand, but when she went to put it back on it was gone.

She testified she asked Fernandez “at least four times” if she had seen the ring, and Fernandez said no each time.

Later in June 2017 – she couldn’t recall the exact date under cross-examination – the alleged victim said she and her husband were in Manchester and decided to stop by a pawn shop with which she and Fernandez were familiar.

“I described the ring, and they said, ‘yes, we have it,'” she said. They also told her Fernandez was the person who pawned it, and that she was given $450 for it.

The alleged victim said she then confronted Fernandez via text message, telling her she “found the ring” and was going to Litchfield police to report it stolen.

But Friedman said in cross-examination that Fernandez told the family member she didn’t steal the ring, but found it in the bathroom and was unable to find the owner.

Friedman pointed out that in one of the text messages, Fernandez told the alleged victim, “you were drunk all the time … leaving things around.”

Fernandez continued to insist she didn’t steal the ring, Friedman said, and told the alleged victim “she would get it back, if you can prove it’s yours.”