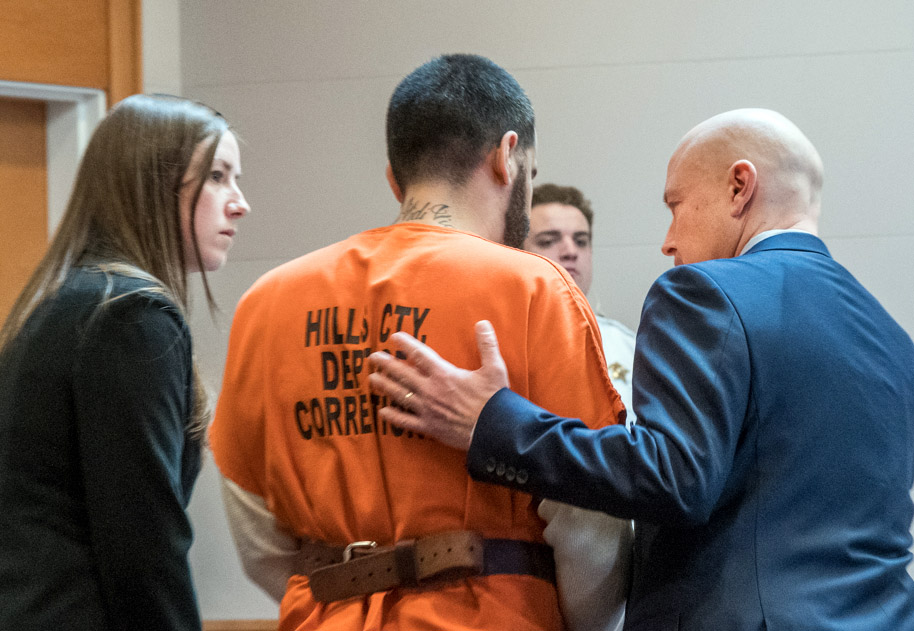 Photo by JEFFREY HASTINGS Justin Moura's attorneys speak with him during his plea and sentencing hearing Tuesday.

MANCHESTER – A plea agreement reached Tuesday in the case of Justin Moura, charged in the shooting death last year of Nashua native and Hudson resident Tanya Hall, calls for Moura to serve 12-24 years in State Prison, with the opportunity to have four years of the minimum suspended.

Moura, 35, of Manchester, pleaded guilty to one count of manslaughter in exchange for the prison term. The charge accuses him of recklessly causing Hall’s death by shooting her, according to the Attorney General’s office.

Moura also agreed to waive his right to apply for sentence suspension when he completes two-thirds of his sentence.

Moura was initially charged with second-degree murder, which accused him of “recklessly causing Hall’s death under circumstances manifesting an extreme indifference to the value of human life by shooting her,” according to the indictment.

It was one year ago Monday that Hall, the mother of a young boy her family called “the light of her life,” was shot during a confrontation between Moura and Hall’s friend Jeremy Winslow outside Club ManchVegas.

Winslow was driving the vehicle in which Hall was a passenger when Moura, claiming he had been struck by Winslow’s vehicle, brandished a handgun and ran up to the vehicle.

Moura told police the gun went off when he slipped on ice as he approached the vehicle. The round struck Hall, and Winslow, upon realizing she had been shot, drove up to a parked police cruiser for help.

Meanwhile, Hall’s friends and family members filled the seating on one side of the courtroom at Tuesday’s hearing, over which Hillsborough County Superior Court North Judge Amy B. Messer presided.

Some members of Hall’s family addressed the court, describing her as “someone you want to be around … who lights the room and makes people smile.”

Hall, who another family member said exuded kindness, “had a motto: You never know what someone else may be going through.”

Assistant Attorney General Peter Hinkley, who prosecuted the case, said after the hearing that the prosecution’s focus “was on the loss of Ms. Hall’s life … that was our focus throughout.”

From the beginning, Hinkley said, Moura has been accused of committing “a reckless act … the history of this case has always been (the shooting was) unintentional.

“We accepted that representation for the purposes of this plea agreement,” Hinkley said, adding that the case “has always been charged as a reckless crime,” meaning that Moura was accused of “recklessly,” rather than “knowingly,” causing Hall’s death.