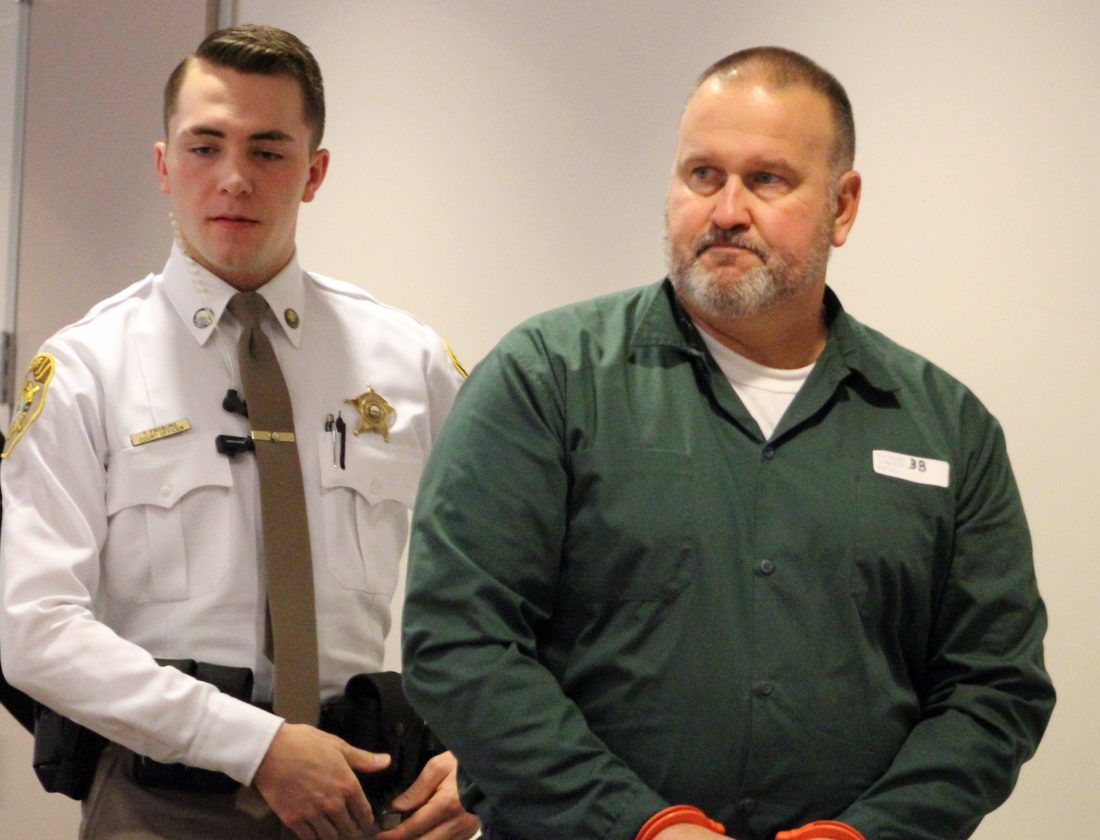 Telegraph photo by DEAN SHALHOUP A court officer escorts Richard Cormier into Superior Court for his hearing on his motion for early release from prison. A judge is considering the motion.

NASHUA – In 2016, having served two-thirds of his minimum 32-year prison sentence for the murder of an elderly Nashua man in 1993, Richard Cormier was considering filing a court motion asking a judge to suspend the remaining decade or so of the sentence.

But Cormier, now 53, soon had second thoughts, and eventually scrapped his plan to file the motion, he said last week in Superior Court in Nashua.

“I realized I needed more help,” Cormier said, adding that he’s confident he would get that help if he were allowed early release to enter Delancey Street, the unique residential self-help program that houses its residents in facilities that range from a 17-acre rural ranch in New Mexico and a former Hilton Hotel in Los Angeles to a waterfront villa in San Francisco.

“I feel I will do better going down that path than stay in the general population,” Cormier said, referring to prison.

He said he has applied to Delancey Street and has been accepted.

While in prison, he said he’s gotten involved with the local Buddhist community, which he said “gives me something positive to focus on in a negative environment.”

He was charged with one count of first-degree murder, which carries a mandatory sentence of life in prison without chance of parole.

Police determined Richard had been killed two days before a woman, identified as his fiancee, discovered his body.

A small gathering of first-responders soon expanded into a large presence of police officers and detectives on the afternoon of Sept. 27, neighbors said at the time. As rain threatened, police rigged up a tarp to cover the area around Richard’s body as they conducted their investigation.

Following last week’s roughly one-hour hearing, Judge William Delker told the parties he would consider their respective arguments and review documents in the case, then issue his ruling, which hadn’t been filed as of Friday.

In police interviews following his arrest, according to Telegraph stories at the time, Cormier confessed to the killing, telling police Richard agreed to give him $20 and loan him his car, which Cormier drove to Massachusetts to buy crack cocaine.

Cormier said he smoked all the crack on the way back to Nashua, and wanted more, he told police. He said he engaged Richard in small talk, describing himself as “in a frenzy” and not knowing what to do next.

He eventually attacked Richard, pinned his face down into a flower bed and choked him until he went limp, then retrieved an ice pick from the house and repeatedly stabbed Richard, according to the Telegraph stories.

But weeks later, Cormier and his lawyer at the time, Attorney Barbara Keshen, argued that his confession shouldn’t be used as evidence against Cormier because police “manipulated his parents to coerce him to confess.”

During the hearing, however, the parties announced they’d come to a plea agreement: Cormier would plead guilty to second-degree murder in exchange for a prison sentence of between 23 years to life – the defense’s recommendation – and 38 years to life, which prosecutors recommended.

Judge Philip Hollman adopted the prosecution’s recomendation, but in 1995, a judicial review committee, made up of three judges not involved in the case, found the sentence “disproportionate in comparison with similar cases” and reduced it to 32 years to life.

Meanwhile, Attorney Andrea Amodeo-Vickery, who represented Cormier at last week’s hearing, told Delker that Cormier “is not looking to be released into the general public, but (into the) custody of the Delancey Street program.”

Having been accepted into the program gives Cormier “a great opportunity,” Amodeo-Vickery said, adding that she is “quite impressed” with it.

Perhaps most impressive is Delancey Street’s fee structure: “It won’t cost (Cormier) or the state anything.”

Several people close to Cormier, including his brother, Col. Daniel Cormier, attended the hearing and addressed the court on Cormier’s behalf.

When Cormier rose to speak, he recalled Richard as “a generous man … a kind gentleman who did nothing to provoke” the attack.

While he “never shied away from saying ‘I’m sorry,’ the shame I felt still resonates with me today,” Cormier said.

Attorney Nicole Clay, a former Nashua police prosecutor and now an Assistant Attorney General, argued against Cormier’s early-release motion, telling the court that Cormier said many of the same things at the hearing as he did at his sentencing hearing in 1994.

“There’s nothing new today … this has been taken under consideration before,” Clay said. “This doesn’t warrant a reduction” in his sentence.

Cormier “chose to kill a 71-year-old man (by) strangling him and stabbing him, dragging him into the bushes … then took his car and went to buy more drugs,” Clay said.

If Cormier “wants to spend his life free from addiction, he can do that in prison. Delancey Street will still be available when he finishes his sentence,” she added.

In her final remarks, Amodeo-Vickery said Cormier “is not saying he deserves” early release. “He needs it.

He pled guilty, acknowledged his wrongdoing right away,” she said.

“This is a soul we can save, your honor.”