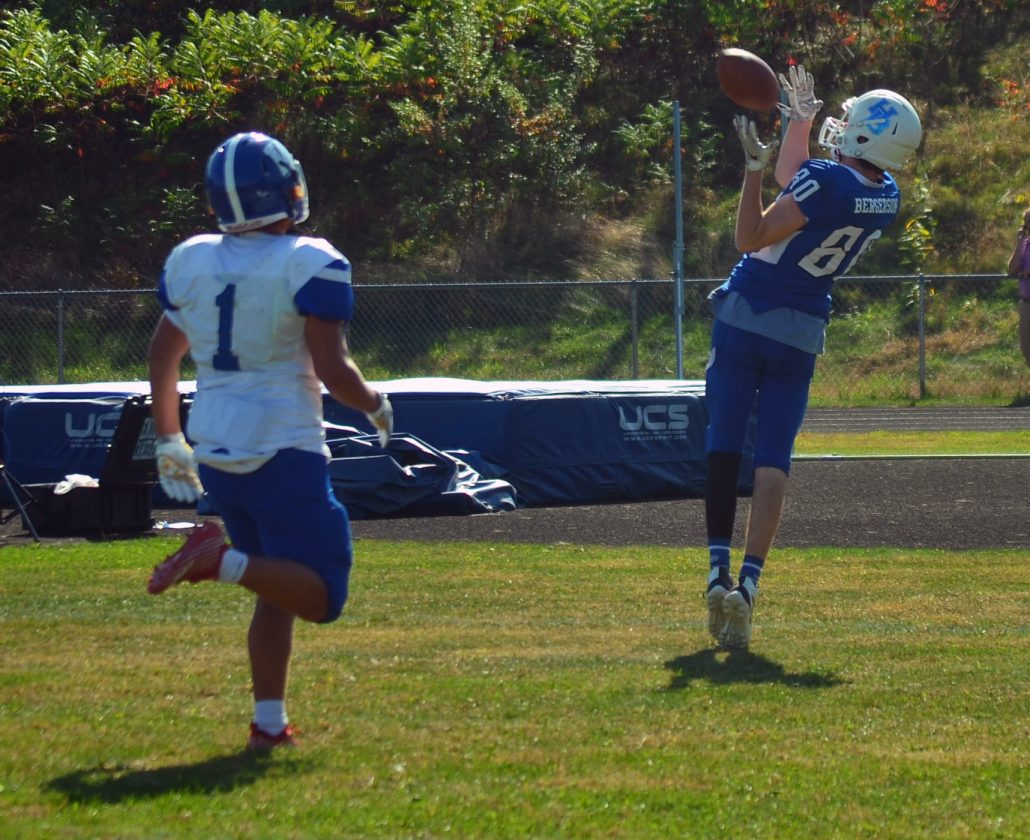 Hollis Brookline's Blake Bergerson hauls in this TD pass in the 49-0 win over West.

HOLLIS – It wasn’t quite a perfect game for the Hollis-Brookline Cavaliers, but it was about as close as one football team can get without being perfect.

Hollis-Brookline made easy work of Manchester West on Saturday afternoon, finishing the day with a 49-0 victory that ultimately could have been higher if not for Hollis-Brookline’s 36-point halftime lead that allowed the clock to run down in the second half.

For example, near the end of Hollis-Brookline’s first drive, Quinten Wimmer caught a pass from his brother Sander and then lost it in what was ruled as a fumble rather than what West claimed was an elaborate forward lateral. That fumble (or lateral) almost immediately found its way into the hands of Hollis-Brookline’s Blake Bergeson, who finished just four yards short of the end zone, with Sander finishing the job on the next play.

Or on another play in the second half where Sander appeared almost certain to lose his footing and end up out of bounds just short of the goal line. He didn’t. That marked his second rushing touchdown, but he had three more through the air, with the third coming just as easily as the one he had a play earlier to Bergeson that came off the board due to a penalty.

Oh, and Sander had an interception as well in what was the last of West’s three pass attempts on the day.

There were numerous moments like that on a day where Sander, and by extension the rest of the Cavaliers, really could do no wrong.

“Every week is that way, what’s (Sander) going to do this week that’s different? Is he going to just land on the ball and end up with a touchdown?” said Hollis-Brookline Head Coach Chris Lones. “There are certain kids that just make things happen regardless of the situation and the best thing I can say is no situation has been to big for (Sander).”

On the other sideline, frustration and accolades for the host.

“Hollis-Brookline is a way better football team than we are,” said West Head Coach Tom Bozoian. “When we come out half speed, this is what happens.”

In addition to the touchdowns, Sander finished with 35 yards rushing on the day, going 10-for-12 through the air with 199 passing yards.

Sander’s touchdown throws went to Bergeson his brother Quinten and Austin Johnson respectively, with Hollis-Brookline also getting a six-yard rushing touchdown from Quinten and a 12-yard rushing score by Kyle Manley to open the second half.

West ended with 82 yards in total, all of which came on the ground, with Xavier Burpee leading the way with 26 yards on Xavier Burpee finishing with 40 yards on 17 carries.

The Cavaliers (3-1) now head to Pelham for a 6 p.m. contest next Saturday. West (2-2) will seek redemption next week on the road next Friday night against a Con-Val team that has only scored one touchdown in its last three contests.