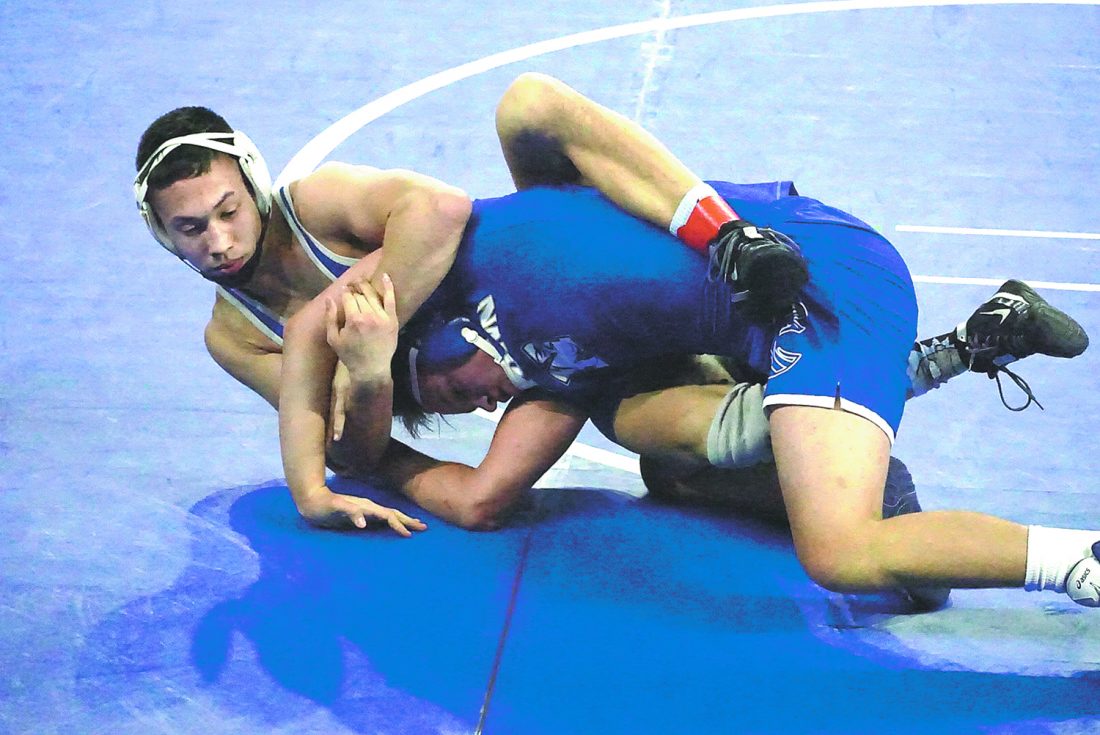 MERRIMACK – Anson Dewar admits it. He was duped.

“My dad (Jeff) told me we were going to the gym,” said the Merrimack High junior of his first encounter with the mat back in the third grade. “I had no idea it was a wrestling practice. But I liked it. I know that.”

Eight years later, the joke is on the rest of the state and extends outward through New England.

Dewar, a three-year varsity standout for the Tomahawks’ wrestling team, is one of the most dynamic performers in the state.

That, folks, is a lot of wins for just two-and-a-half high school seasons.

But Dewar’s quest has barely begun. His recent fourth-place at the Lowell Holiday Tournament was a solid step forward from his seventh place as a sophomore, but it was not totally a success.

“It’s a confidence booster. I mean, Lowell is the toughest tournament around until you get to New Englands,” said Dewar, who was third at the New Hampshire Meet of Champions last year.

“It’s good to see I’m right there with the elite competition right now. I had hoped to place higher than last year, but I wasn’t exactly impressed with my last match (the consolation finals).”

The stretch run to February and states/New Englands kicks into gear Saturday as South hosts the Nashua Hall of Fame Tournament with 21 teams coming in. In addition, Dewar has the Capital Classic in Concord circled on his calendar.

“I’ve never won the Nashua tournament and the Capital Classic always brings in some top kids,” he said.

Dewar remains driven on the mat, just as he is in the class room where the course load features Honors Chemistry, Spanish 4, Honors Pre-Calculus, Honors English and Honors US History.

Sacrifice and determination have come from various places in Dewar’s life. It starts at home where the work ethic in class has been stressed as long as he can remember.

But Dewar had the opportunity to learn from a master on the mat when he was a freshman, former Merrimack High state champ Julian Hovan.

Few have been as fierce competitively as Hovan, and it was pounded into Dewar daily.

“Every day, he was by far the toughest wrestler I have ever faced,” said Dewar. “What a great partner. He tried so many different moves. I learned so much from him.”

Most important was seeing first-hand what it takes to be great. And Dewar has never forgotten.

“It’s an individual sport, and I know it’s all up to me out there,” said Dewar, whose younger brother Rhys is a rising star in the Merrimack Youth Association program. “I can’t rely on anyone else to do the work for me. If I don’t work hard all the time in practice, I don’t get the results I want. It’s that simple.”

Dewar is continuing in a wrestling tradition that has consistently kept the Tomahawks near the top in Division II for years now. A new head coach, Bryan Dine, has picked right up with it.

As for Jeff, he remains right there in Anson’s corner. There are no surprises. Anson, who wrestles for Doughboys in the offseason, has bought in with his sights set on wrestling in college.

Programs like Roger Williams and WNEC have already inquired, but that decision can wait.

Currently, when not involved with wrestling, father and son have a new quest.

“We like to hike. And my dad and I are trying to tackle all 48 4,000-footers in the White Mountains,” said Dewar, noting that they’ve already chewed up the trails on 16 of them, his favorite so far being Mount Eisenhower.

Like his rise to the top in wrestling has been, that accomplishment will likely only be coming in a matter of time.