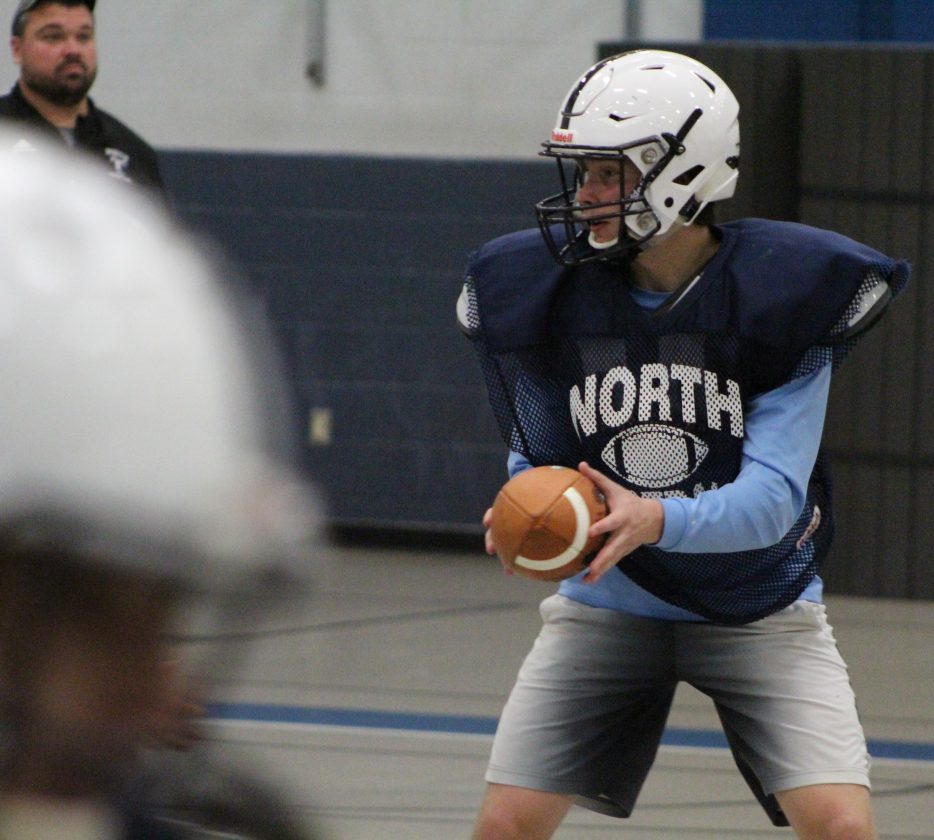 Telegraph photo by TOM KING Sam Nicholls has been a jack-of-all trades for Nashua North, as he may even play some quarterback in Wednesday night's Turkey Eve Bowl vs. Nashua South under the watchful eye of North offensive coordinator Chad Zibolis.

NASHUA – Sam Nicholls has a favorite animal – the black panther. He’d love to go to Africa someday to work and care for them.

But, before he begins to embark on his dream job, he wants to help tame another Panther – the Purple kind.

Yes, the Nashua High School North senior football standout would love to close out his high school career with a win over the Nashua South Purple Panthers in Wednesday night’s Turkey Eve Bowl. And he also hopes to play in college.

But some day, he definitely wants to go to Africa as a veterinarian, knowing he will study biology for four years in college and another four years immersed in veterinary medicine.

“I really want to go to Africa and work with big animals,” he said. “I love exotic animals, lions and stuff, anything huge.”

He started looking at the veterinary world his sophomore year, and the possibility of someday going to Africa through college or after as well.

But for the next few days Nicholls will focus on his other passion, football.

He’s been the jack of all trades, playing receiver, defensive back, punting, etc. And don’t be surprised to see him be the latest to get snaps at quarterback for the Titans on Wednesday with junior standout Curtis Harris out with a knee injury. Nicholls is part of a small, but close-knit Titan senior class that do a lot of things off the field together, including going to watch college games in the region. And Nicholls will want to play at the next level.

“Sam’s an athletic kid, he’s smart, and he understands what we’re trying to do,” North coach Dante Laurendi said. “He’s made some key plays for us late in the year when we needed to open some things up. He understands through the course of games we’re probably not going to throw the ball 30 times a game, but when we need to he has to be the guy and make plays.”

Working as a receiver takes preparation, if you do it the way Nicholls likes. He’ll take the spare time to work with quarterbacks and fellow receivers to get his routes down pat.

“He’s smart, pays attention, and he’s able to help out some of the young kids route running,” Laurendi said.

Nicholls said he began taking the preparation aspect seriously last year, loves watching film and does it often,critiquing himself, plus opposing defensive backs. “Do they bail early, do they crash down, all that,” Nicholls said.

He’s worked away from school at anyplace indoors or out, setting up cones for cutting and having his brother throw to him. Or in the warmer weather, would stay after practice with Harris and teammates Jayden Espinal and Lucas Cunningham, among others.

One of the unheralded parts of Nicholls’ game as a receiver is his blocking ability.

That, he says, is a huge part of the position.

“Whenever we’re doing skill drills, if we’re not catching the ball, we’re working on sealing inside, sealing outside,” Nicholls said. “We work on blocking all the time, and that’s a huge part. If we can’t block outside, then we’re not going to run outside.

“He did a great job blocking, first and foremost, early in the year for us,” Laurendi said. “Then the passing game opened, and he was able to make some big plays for us. … He’s an athlete. He’s played basketball, track, played lacrosse last year, and he seems to pick things up naturally. He’s got good body control, he knows how to get his body in good position, hand position, and that’s why he’s able to do a good job for us. He kind of gets it, what’s going on game plan wise.

Nicholls definitely wants to continue playing at the next level.

“Honestly, I’ve just been looking everywhere, I went to a few camps,” Nicholls said, adding he’s looked at Assumption, Bentley, Central Connecticut. “Honestly, anyone that wants me, I’ll go play for them. It really doens’t matter where I play.”

Whoever gets him will be getting an athlete. He’s played basketball, but ankle ligament injures that he suffered last year will keep him from taking that hardwood risk again this winter. He still has to have his ankle wrapped before every game, but after surgeries he has no need for any pins, etc.

He’s a sprinter-jumper in track, and has played lacrosse. His freshman year he had the urge on a whim to compete in the state Decathlon after watching Nashua South’s Terrell Lewis win it, spurring his competitive nature even though he had never before competed in several of the events. He finished a respectable 46th out of 83 athletes.

While he feels he has a lot to look forward to, Nicholls is preparing himself for the end of his high school football career in a few days.

“It’s really sad,” Nicholls said. “I’m looking forward to it, I want to play, but it’s really sad my high school career is coming to an end.”

So the sound Nicholls doesn’t want to hear is that final buzzer at Stellos.

But really, it’s just a matter of trying to tame one Panther at a time.