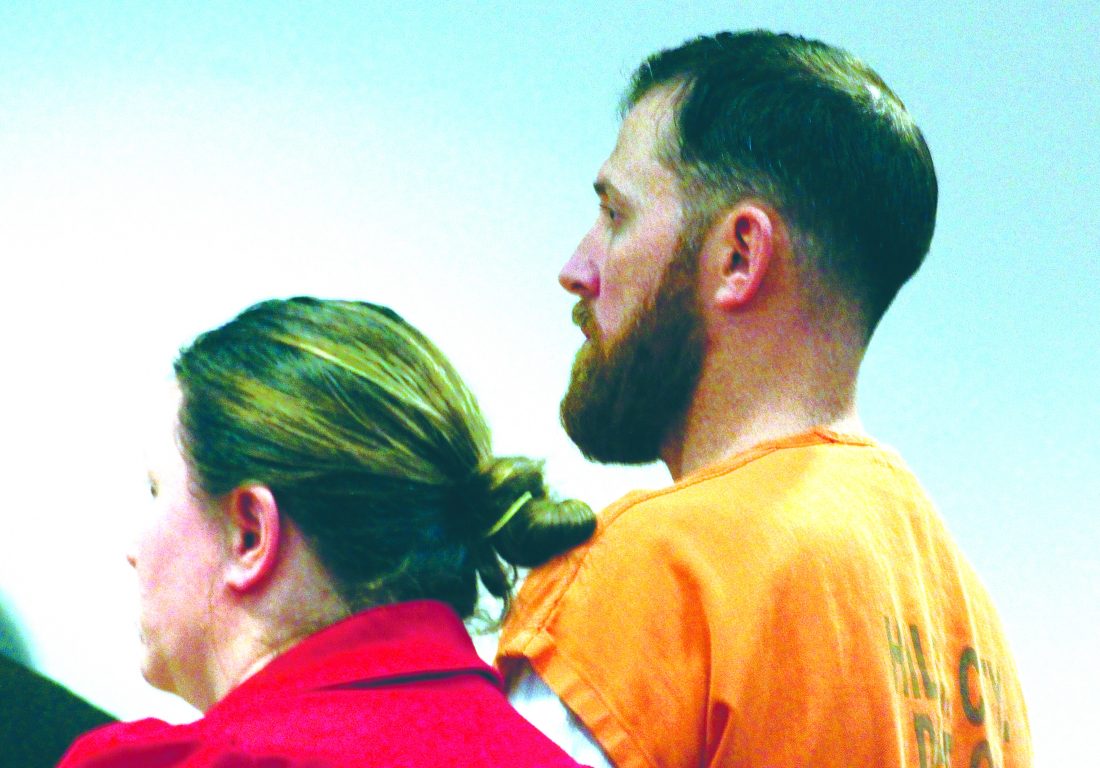 NASHUA – U.S. Marine Cpl. Charles Donnelly, a Hudson middle school counselor and veteran of the War in Afghanistan seriously wounded by an improvised explosive device (IED) in 2011, stood before a Superior Court judge Tuesday in his first court appearance since his arrest Monday on felony sex assault and domestic violence-related charges.

Donnelly, who lost part of his left leg and spent a year in the hospital recovering, is accused of “forcing himself upon” his wife and making “unwanted sexual advances” toward her, allegations that a prosecutor said left the woman terrified of him.

Donnelly, 35, of 19 Byron Drive, turned himself in to police just after 11 a.m. Monday, after learning a warrant had been issued for his arrest, according to attorney Eleftheria Keans.

He is facing three felony counts of aggravated felonious sexual assault, and one misdemeanor count of simple assault – domestic violence.

The prosecutor, First Assistant County Attorney Kent Smith, asked Judge Charles Temple to order Donnelly held on preventive detention due to the nature of the allegations, which Smith called “violent attacks upon his wife.”

Smith also asked that a previously issued court order prohibiting Donnelly from having any contact with the woman remain in effect.

Keans said Donnelly has no objection to the no-contact order remaining in place. Once he is released from custody, he plans to live with his parents elsewhere in Nashua.

In asking for personal recognizance bail, Keans said Donnelly has no criminal record, and is a college graduate who joined the U.S. Marines in 2008.

In May 2011, according to a Derry News story that ran in October of that year, Donnelly stepped on an IED while on patrol with the 2nd Reconnaissance Battalion in Helmand Province, Afghanistan.

His badly injured left leg had to be amputated below the knee, according to the story.

Keans, meanwhile, said Donnelly has been diagnosed with post-traumatic stress disorder (PTSD), for which, she said, he has been receiving treatment.

Donnelly, according to Keans and police reports, was at an out-of-town bar when he learned of the warrant for his arrest.

“When he found out about (the warrant), he made arrangements for a ride to the police department,” Keans said. Police in their reports said Donnelly was highly intoxicated when he arrived at police headquarters.

It wasn’t clear on Tuesday whether Donnelly’s arrest would affect his job as a counselor at Hudson Memorial School, Keans said.

“It may, but he is certainly employable,” she said.

It’s not clear how long Donnelly has maintained the position at the school, which serves grades 6-8, but as of Wednesday, his name was still listed on the school’s website as one of its three counselors.

Temple, the judge, granted Keans’ request for personal recognizance bail for Donnelly, but with the stipulation he be put on home confinement – meaning he could only leave his parents’ house for certain reasons, such as medical appointments, court obligations, meetings with his attorney.

He is next due in court on Nov. 27 for a review hearing.