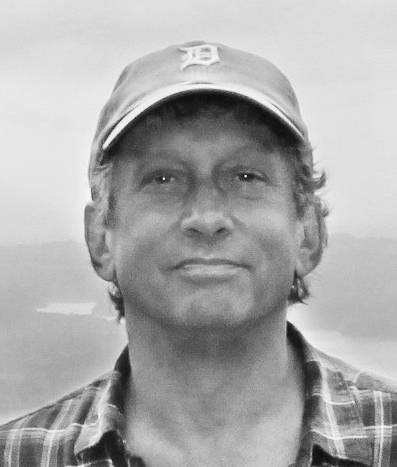 George Frederick Thurber, known as Geof to his friends and family, passed away in the early hours of Monday morning, Feb 5th, at the age of 63 of an apparent heart attack. He is survived by his wife Beth Tierney, his children Ella and James Thurber, his father Davis P. Thurber, stepmother Patricia Thurber, his sister Shellburne Thurber, brothers Steven and Matthew Thurber, stepsisters Michelle Earnest and Kathy Davis and many much-loved nieces, nephews, cousins, sisters and brothers-in-law. Geof was pre-deceased by his mother Shirley Amos Thurber and his stepbrother Charles Martin Skillas.

Geof was born in Boston, MA in 1955 and grew up in Nashua, NH. He attended New York University and Sarah Lawrence College before moving to Detroit, Michigan, where he played bass in Jett Black, a Phoenix, Arizona band affiliated with Alice Cooper. After two years, the group moved to LA, where Geof, a skilled bass player and teacher, continued to work as a session musician before finally settling in Boston. He performed in several Boston area bands during the hey-day of the 1980’s club scene.

In 1989, Geof joined fellow musician Greg McCleary’s Heart Punch Studio, Inc., which quickly evolved from a music recording studio into a highly successful audio post production house for broadcast, television and independent film. Over the ensuing years, Geof became a partner in the business and worked on sound design for over 200 broadcasts, such as Nova, American Masters, American Experience, and Independent Lens, and for many independent films, including Brad Anderson’s break-through film Next Stop Wonderland. Geof and Greg were nominated for an Emmy in 2006 and won the Best Sound festival prize at the Jackson Hole Wildlife Film Festival in 2007.

Greg McCleary of Heartpunch said “Geof’s first career, as a musician, informed his second. He approached sound design in documentaries like a musical arrangement. It was there to support the story being told, not to detract from it.”

Geof loved the outdoors, especially New Hampshire’s lakes region. He shared his life long reverence for Squam Lake by boating friends and family for hours across its stretches and channels. With his wife and family, he shared his home in Newton for countless dinners and get-togethers.

Geof was the gentle heart of our family. He lived for his wife and his children who were, without doubt, his proudest accomplishment. They were his greatest joy and what gave his life the most meaning. Their many adventures traveling together were filled with wonder and will live in their memories forever. He was infinitely kind and unfailingly generous. He will be sorely missed.

In lieu of flowers, donations in Geof’s name can be made to Camp Hale, a summer camp for underprivileged kids from Boston, located on Geof’s beloved Squam Lake.