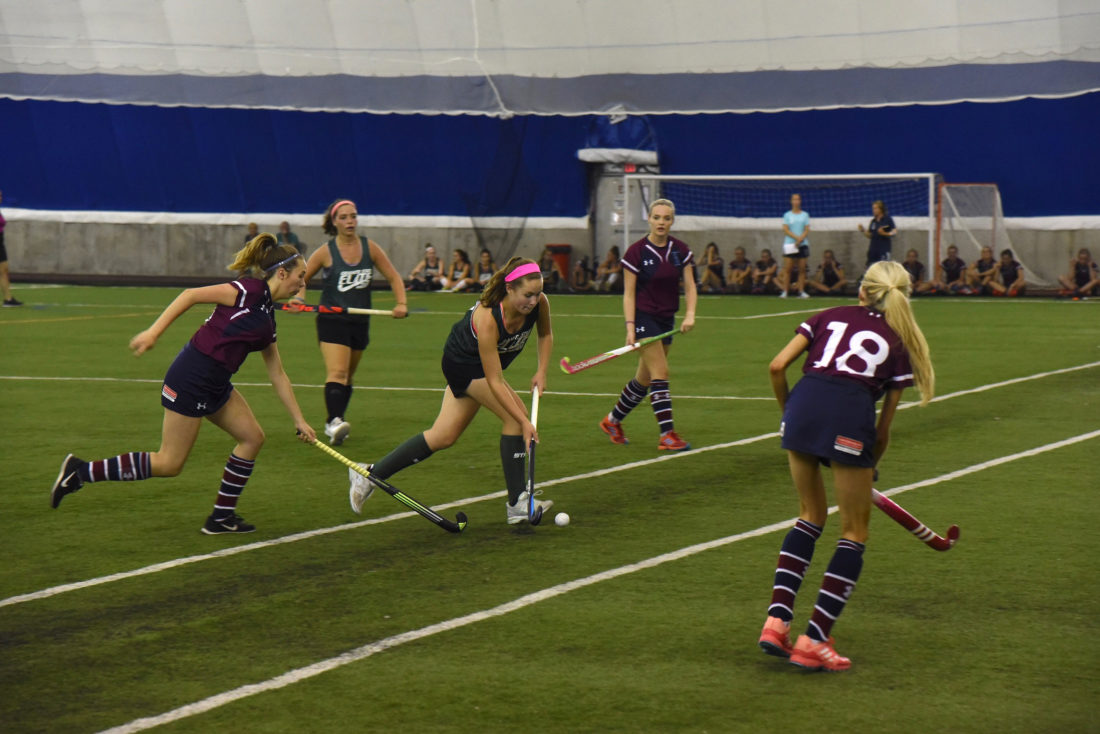 Photos courtesy of Rick HolderMembers of the Granite State Elite girls’ Under 16 field hockey team, in green, take on a squad from Wellingborough School in Northhampton, England, in the Hampshire Dome in Milford.

Photos courtesy of Rick HolderMembers of the Granite State Elite girls’ Under 16 field hockey team, in green, take on a squad from Wellingborough School in Northhampton, England, in the Hampshire Dome in Milford.

Photos courtesy of Rick HolderThe squads from Granite State Elite and the Wellingborough School in Northhampton, England, pose for a photo in the Hampshire Dome in Milford.

Almost 500 years ago, someone in Britain picked up a stick, found something that at least resembled a ball, and started batting it along the ground. Soon, someone else got a stick and went after that ball. And soon someone else decided it might be a good idea to stand in the way of the people hitting the ball along the ground with sticks.

And that is how field hockey was born.

More or less. Probably less, but one gets the idea.

Suffice it to say that men and women, boys and girls in Britain have been playing field hockey far longer than people in the United States, but the game is the game and late in July, a team from across the Atlantic met up with the Granite State Elite team from New Hampshire and they had at it in the Hampshire Dome in Milford.

The teams split two contests – the British call field hockey matches “fixtures” – with the Granite State Elite Under 16 squad winning the first 2-0 and the Wellingborough squad coming back to win the second “fixture” 3-0. 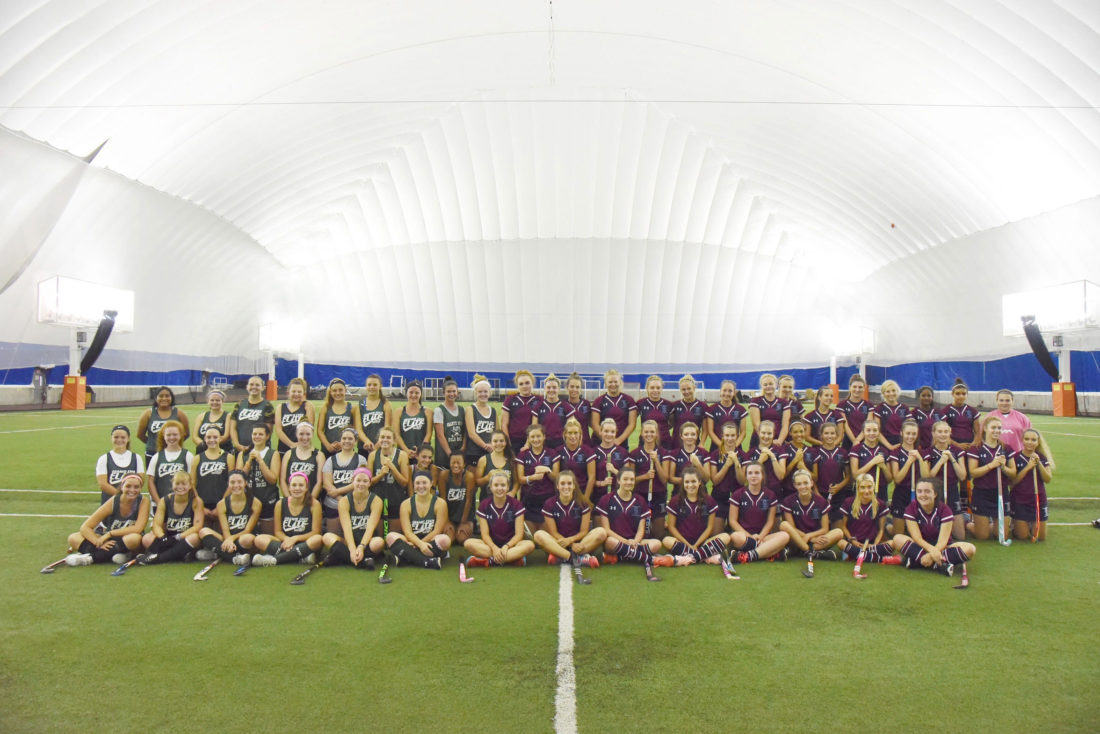 Photos courtesy of Rick HolderThe squads from Granite State Elite and the Wellingborough School in Northhampton, England, pose for a photo in the Hampshire Dome in Milford.

“Both games were played in excellent spirit,” said Jill Livingstone, Wellingborough’s coach and the director of the squad’s trip to the U.S.

That sentiment was echoed by Jody Donohue, organizer for the Granite State Elite team.

“It was an amazing experience for our players and theirs,” she said.

But before the matches were ever played, the two squads had to find each other. Donohue explained how that came about.

“A travel agent from Boston heard about our team as a dominant force in New Hampshire, not just for strength of play, but for character on and off the field,” she wrote in an email response to questions from The Cabinet. “The kids hit it off from the moment they stepped off their bus.”

It was Wellingborough School, a co-educational independent day school in the market town of Wellingborough in Northamptonshire, England, founded in 1595, that contacted the New Hampshire team and, in the words of Rick Holder, who owns the Hampshire Dome in Milford, “it was game on.”

But there was still the issue of finding places for 37 British girls between the ages of 15 and 19, and five staff members to stay and that task, Holder said, fell to Donohue. It was quickly accomplished.

“Our players opened their homes and hearts,” she told The Cabinet. “Multiple families prepared beds.”

And when the matches were over and the British girls were preparing to leave Milford, those families “made a wonderful homemade breakfast for them prior to their early morning departure.”

They even got their first tastes of American apple pie and even Whoopie Pies.

The British girls, according to the Wellingborough School blog, had been a bit nervous about staying at unfamiliar homes, but it all turned out well.

“When we collected the girls at 8 a.m. the next morning, to say that they were buzzing was an understatement. Talk was of the great night they had, the incredible breakfasts they had been cooked and some were wearing training shirts given to them by their hosts,” a coach wrote on the blog — wellingboroughsportstour2018.wordpress.com.

That was all great, Livingstone said, but the girls also marveled at the Hampshire Dome.

“For the girls, it was very exciting to play in such a superb facility and their first experience of play an 11 aside, outdoor rules game, inside,” she wrote in an email to The Cabinet. “The occasion was made even more atmospheric by an impressive thunderstorm outside, combined with the enthusiastic support in the Dome.”

The coaches and staff said much more on the blog, referring to the Dome as “an incredible playing venue” and suggesting that blog readers Google “Hampshire Dome” to see for themselves.

The British team then traveled to New York City from where they would head back to England.

It was a bittersweet departure, Livingstone told The Cabinet.

“Sadly, onward travel to New York meant our stay was much shorter than we would have liked but the girls departed their new friends with promises of keeping in touch and future visits,” she wrote.

That was seconded by Donohue.

“The smiles and hugs as the girls began to load their bus again were all I needed to know that this was a fabulous success, on and off the field,” she said.