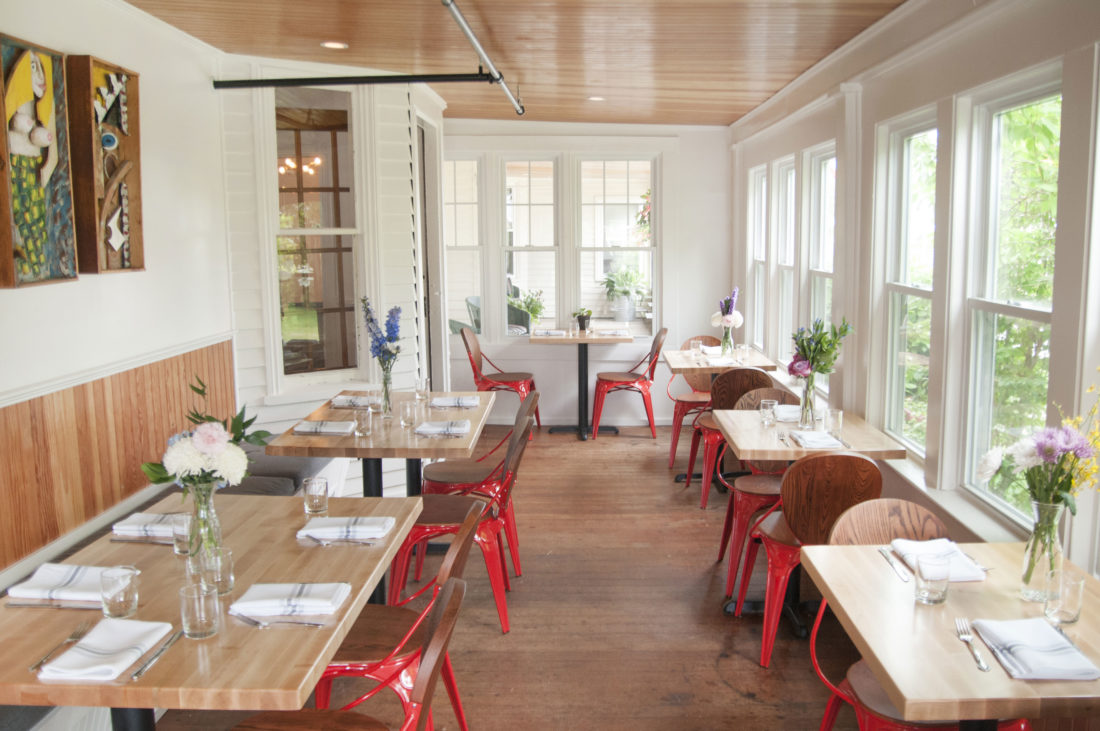 Courtesy photo by Brian Goetz. A dining area at the Higgins Beach Inn, in Scarborough, Maine.

Courtesy photo by Brian Goetz. A dining area at the Higgins Beach Inn, in Scarborough, Maine.

Courtesy photo by Brian Goetz. A bird’s-eye view of the exterior of the Inn at Ocean’s Edge, in Lincolnville, Maine.

Courtesy photo by Brian Goetz. The morning view from the light tower at Monhegan Museum, on Monhegan Island.

Courtesy photo by Brian Goetz The sunset on Star Island, an island that sits 7 miles off shore from Rye, N.H. At 38 acres, is the largest of all of the Isles of Shoals.

As summer winds down, there are no better places to book-end the last beach days than heading to islands, New England-style. Start off along the New Hampshire coast, throw in some classic inns, end at an “artist-colony” – that’s the way to keep summer alive. At least through fall.

Taking the Thomas Laighton from Portsmouth to Star Island, I’m in good company of day-trippers and folks going “birding.” Star Island sits seven miles off shore from Rye, and it is the largest, at 38 acres, of all the Isles of Shoals. Sailors imagined it as the “points of shining stars” with its jagged outcroppings into the Atlantic and John Smith first mapped this island in 1614.

Once on-island, I jump off the dock into the frigid Atlantic to welcome a summer jaunt up the coast. Dinner that night is shared, community style, and afterward, we all head to rocking chairs on the wrap-around porches for sunset views. Rooms in the Oceanic Hotel are spare, but ocean breezes are plentiful, and in the morning, I head to the promontory overlooking Gosport Harbor for a layered sunrise of fogged rose.

After breakfast, I take a kayak over to Smuttynose Island to see the nesting Great Black-backed gull chicks. Careful not to encroach, I see fuzzy chicks throttling after squawking mother gulls, and as I travel gingerly, I’m amazed by the abundance of nests. That afternoon, it’s the Thomas Laighton nature cruise back to Portsmouth, and the start of a car ride up the Maine coast.

Higgins Beach Inn is the perfect beach party to spend the night. Warped, wooden floors, high-thread count sheets, and a screened-porch dinner of fresh swordfish and kale greens prepares me for the next morning’s goal of sitting on the coved beach one block away. That night, locals jam the bar, and it’s a rollicking time of sandy feet dancing in humid night air. After Whoopie Pie for dessert, I walk along the empty beach, stars filling the sky. 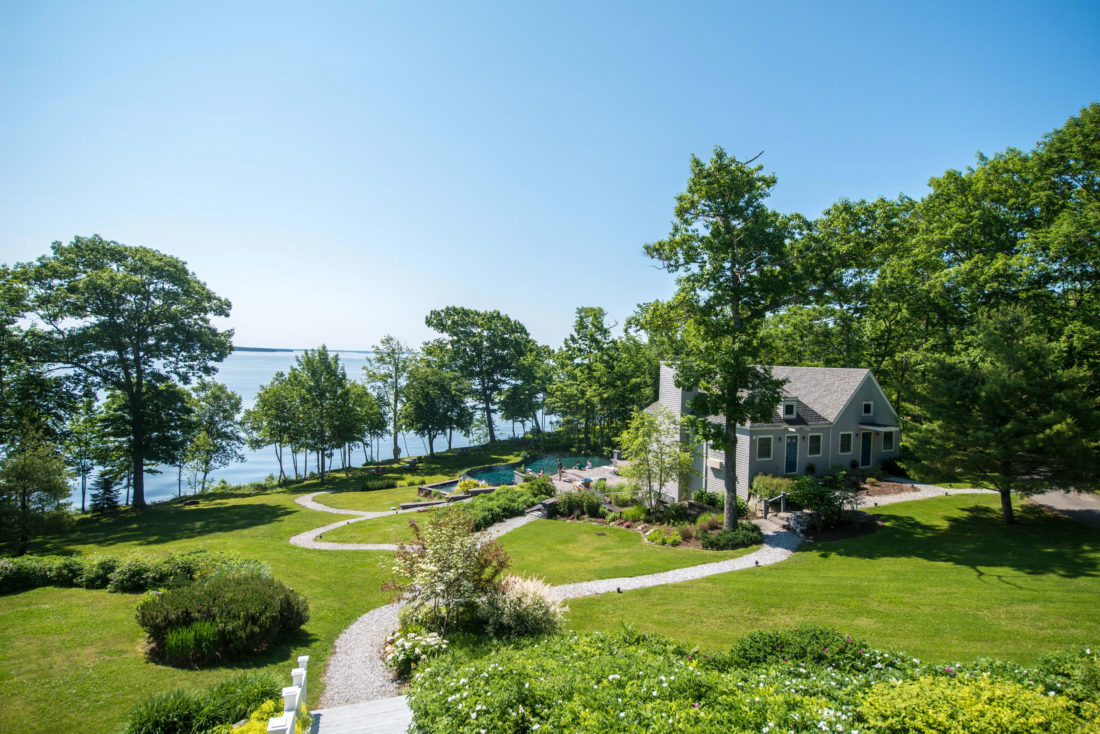 Courtesy photo by Brian Goetz. A bird’s-eye view of the exterior of the Inn at Ocean’s Edge, in Lincolnville, Maine.

For an early morning beach day, I spy surfers grabbing waves from a distant storm coming off Canada. North of commercialized Old Orchard Beach, this nook of tidal pools and empty strands of “seaweed-less” sand, is the spot to bring a breakfast picnic. I soak up the sun for a couple of hours and then head north past Portland toward Mid-Coast, Maine.

I stay away from the traffic of U. S. Highway One through Brunswick and Bath, and take the “road less traveled,” Route 24, which follows scenic Kennebec River. In the quaint town of Hallowell, I visit a favorite brew pub – the Liberal Cup – which serves up chowder in chipped coffee mugs and pints of Dog Days Summer Wheat. Route 17 takes me directly into the Camden area, and after a quick hike up to the Mt. Battie Tower in Camden Hills State Park, I end my day in Lincolnville.

The Inn at Ocean’s Edge is the place to sleep with surf through open windows. Throw in a gas fireplace, a down-covered bed, and overstuffed chairs with picture-perfect views to Islesboro, Lime, Little Bermuda, and Seven Hundred Acre Islands, and you’ve got a getaway. In the meadow, below the inn, sits a heated infinity pool and hot tub, and even with fog rolling in, and buoys clanging up a storm, I grab a cozy robe from the closet and head to the water. That night, after a lobster roll at the Whale’s Tooth Pub, I call it an early night.

The ferry over to Monhegan Island is a small one from Port Clyde. Some passengers strap their bags below deck, but I bring my small bag up to the deck. The horn blows as we take off, and immediately, the Muscongus Bay is alive with wave. The boat dips one way, then another, as we veer toward Marshall Point lighthouse, slant past lobster boats, swerve around schooners, and finally, turn into the protected Monhegan Harbor. 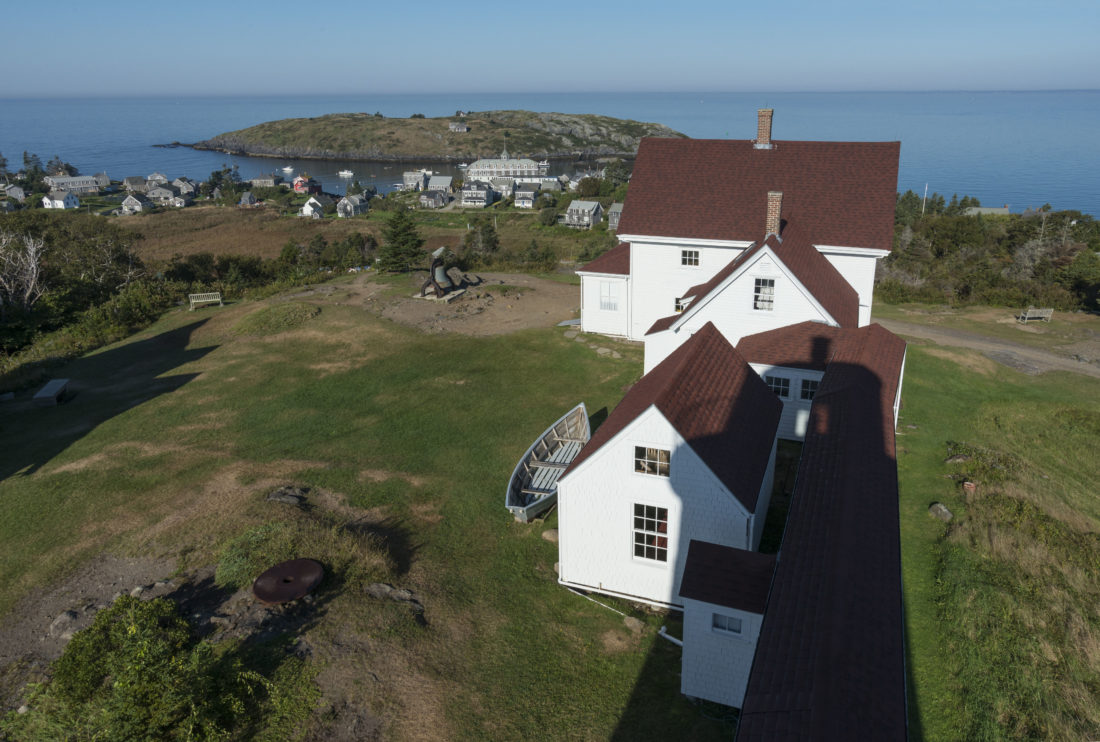 Courtesy photo by Brian Goetz. The morning view from the light tower at Monhegan Museum, on Monhegan Island.

“Better than a roller coaster,” I say.

Walking up dirt paths from the dock, past open artist studios, makeshift groceries selling fine wine, and rugged shops in white clapboard, it’s as if I’ve stepped back through time. Located 12 nautical miles from the mainland, this is land cherished by writers, artists and nature lovers. Preserved by an Island Land Trust which protects over three hundred acres of coves, cliffs, moss forests, and coastline, I’m in seaside paradise. I drop my bag at the Trailing Yew, and head to the trails. Waves smash against the rocks at Lobster Cove, Burnthead Bluff is ablaze with screeching gull, and Cathedral Trail is lined with driftwood fairy houses. Soon, I find myself on the Cliff Trail and this leads me up to the lighthouse and Monhegan Museum of Art and History. This museum is a brilliant gem, lit up by the artistic genius of such luminaries as Alfred Bricher, Andrew Wyeth, Rockwell Kent, George Bellows, Edward Hopper, James Fitzgerald, and Alice Swett. Celebrating its golden 50th jubilee this summer through fall, this museum has a permanent collection to witness.

That night, sharing wine with other art-lovers on the oil-lamp lit porch of the Trailing Yew, we watch the moon rise over Manana Island. 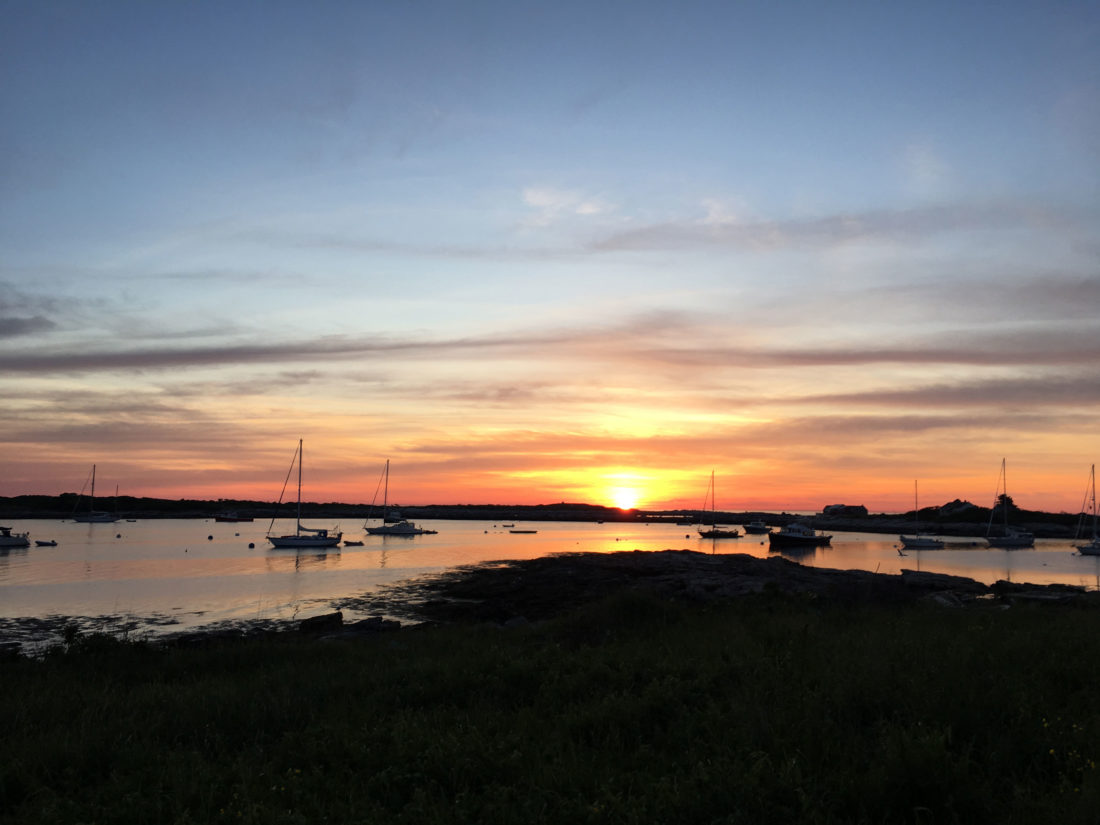 Courtesy photo by Brian Goetz The sunset on Star Island, an island that sits 7 miles off shore from Rye, N.H. At 38 acres, is the largest of all of the Isles of Shoals.