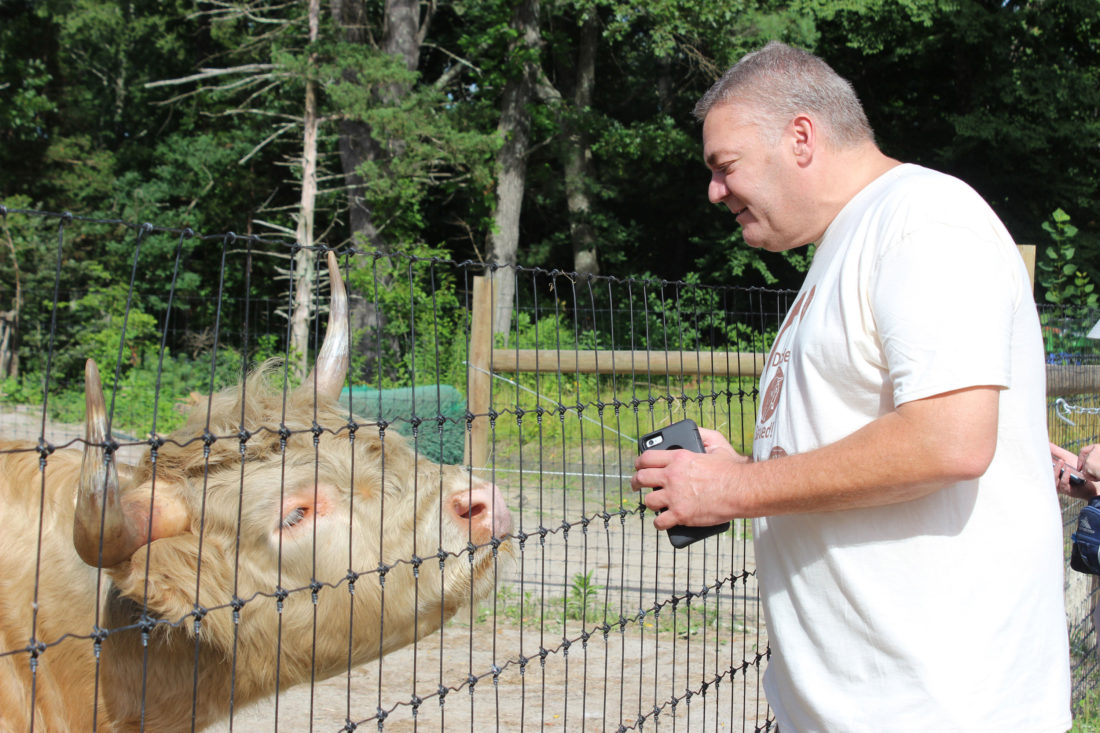 Dudley the bull gets love from friends as he strolls through a pasture at Unity Farm.

Dudley the bull eats a carrot.

Kathy Halamka, above, gets a nibble from ‘Audrey’ the cow. She and Dr. John Halamka own and manage Unity Farm Sanctuary in Sherborn, Massachusetts.

Once “Dudley” roamed a New Hampshire pasture alone. Now the Scottish Highlands bull with the big soulful eyes is surrounded by company, including two sweet young cows in an adjacent stall.

Dudley was purchased from a Milford farm earlier this year by David Wirbal, of Wilton, with the help of donations from a GoFundMe page

Wirbal fell in love with the 1,200-pound bull he visited regularly on his way home from work. He loved the way the animal would trot out to his car when he arrived and looked sad when he drove away and couldn’t bear the idea of seeing him turned into steaks and burgers.

Unity was started two years ago by Kathy and John Halamka on their 15 acres in Sherborn, Mass. They and their daughter Lara, now have 40 mammals, including cows, horses, goats and pigs, as well as turkeys, chickens and geese, cared for with the help of about 50 volunteers. 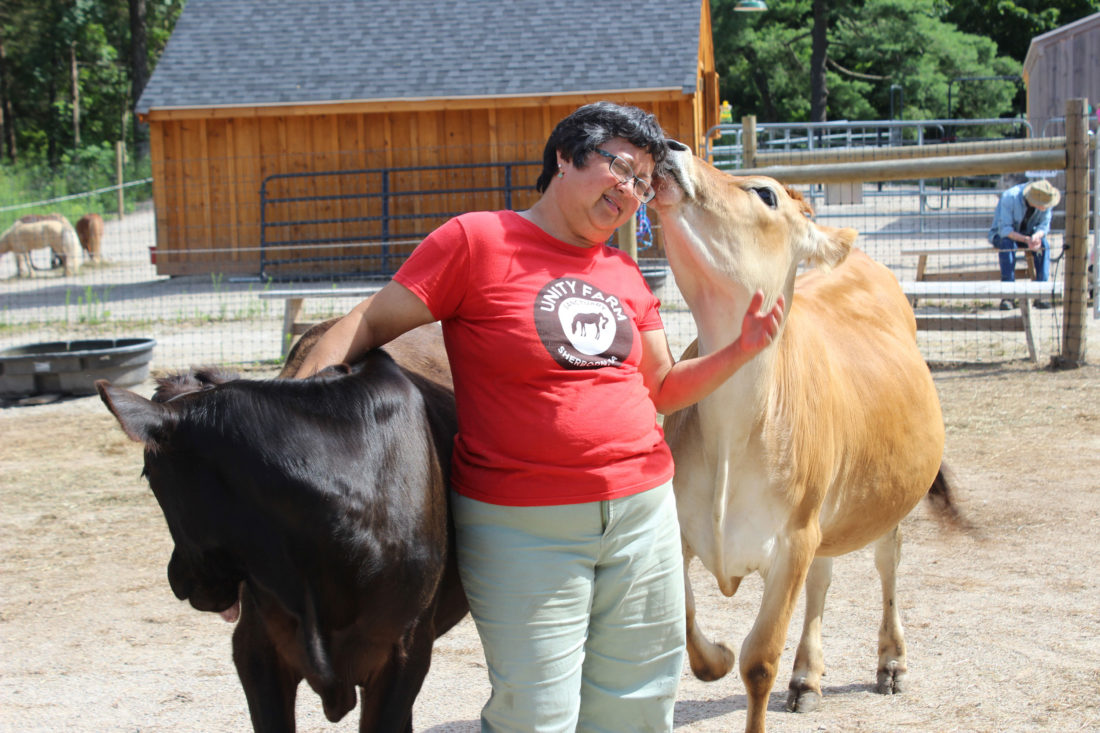 Kathy Halamka, above, gets a nibble from ‘Audrey’ the cow. She and Dr. John Halamka own and manage Unity Farm Sanctuary in Sherborn, Massachusetts.

The animals sheltered here come from a wide variety of circumstances, said Kathy, as she prepared for a recent party at the farm to celebrate Dudley’s arrival.

There are rabbits that were abandoned two months after Easter; a duck found on the streets of Framingham; goats rescued from a backyard breeding operation in Lawrence; and a herd of alpacas taken from what Kathy calls “dire circumstance.”

Mini horses are fan favorites, she said, but her personal favorite is a donkey named “Star.”

Unity considers education part of its mandate, so they are lucky to be near Boston.

“We are the closest sanctuary to an urban setting,” she said, which allows them to offer farm education programs for city children. 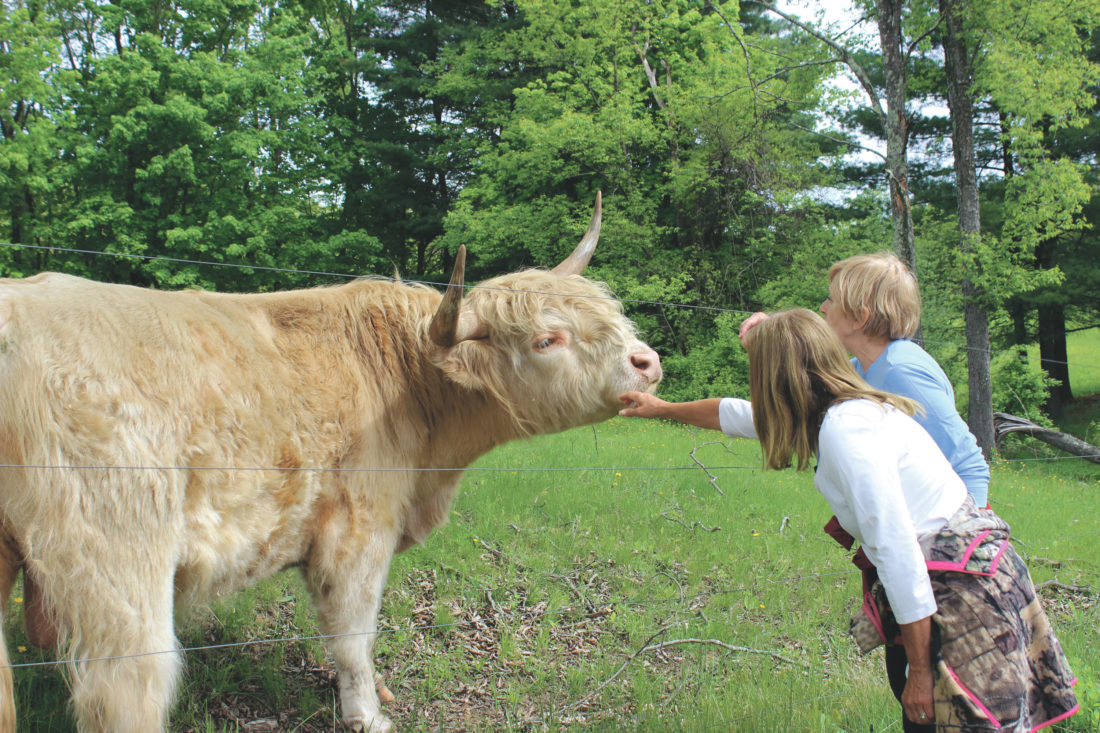 Dudley the bull gets love from friends as he strolls through a pasture at Unity Farm.

During a tour of the farm, Kathy had stories to tell about many of the animals. They all seem to have names, including “Hens Solo,” who was fending off the amorous attentions of one of the farm’s energetic roosters, and “Palmer,” an exceedingly calm and colorful turkey who followed a visitor around as if he had found a new friend.

The Halamkas moved here in 2012 and started with an organic farm, growing apples and mushrooms and offering honey, compost and other farm products.

They gained nonprofit status two years ago. Now, their mission is to provide safe and loving lifelong homes to animals, and also to engage the public “to further the ideal of respect for all life and promote a plant-based food philosophy,” according to their website. In line with that mission, they offer classes in beekeeping, organic farming and animal care.

Unity is part of Farm Sanctuary, an animal protection organization founded in 1986 and known for lobbying for more humane animal-confinement systems and prompting Burger King to offer veggie burgers nationwide.

Wirbal, one of Unity’s new volunteers, says he had no mission beyond saving a big, sweet bull he loves. 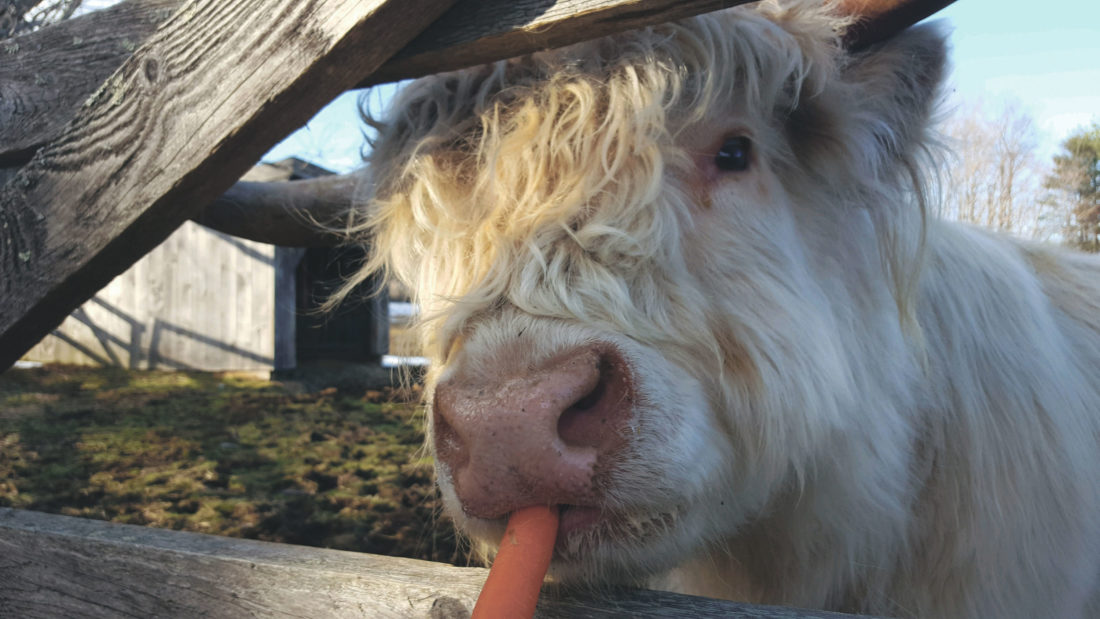 Dudley the bull eats a carrot.

Kathy Cleveland can be reached at 673-3100 or kcleveland@cabinet.com.