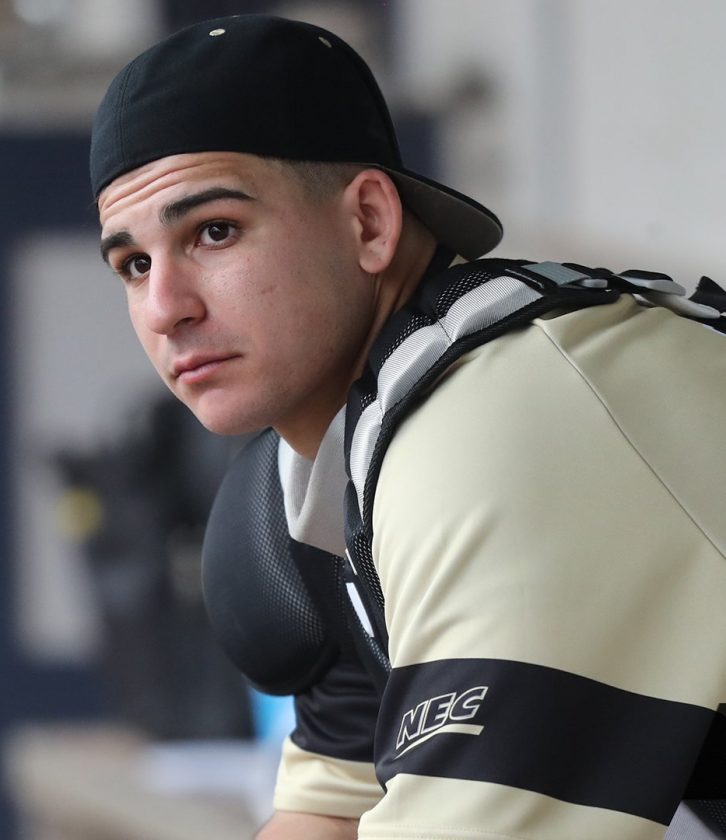 Telegraph file photo Merrimack's Mickey Gasper is currently in Tampa, waiting and wondering when his Yankees minor league catching career will continue after COVID-19 has called a halt to professional baseball.

The plan was in place.

Merrimack’s Mickey Gasper was going through one of his first workouts at the New York Yankees minor league complex in Tampa, Fla.last Friday when all of a sudden he fell into Plan C.

Which is no baseball.

“We were at the ballpark already, we were about halfway thorugh our day,” Gasper, the former Merrimack High School and Nashua Silver Knights catching star who was set to begin his second full season in the Yankees minor league system after recovering from November shoulder surgery. “I was catching bullpen and was moving over to individual defense. Put my bag down, and they were like, ‘Nope, pick it up and bring it with you, we’ve got a meeting.'”

And of course that meeting was the shutdown of camp. A Yankee minor leaguer had tested positive for COVID-19, and since then a second one has.

“Brian Cashman (Yankees general manager) was out there and he talked to us with the some of the Player Development guys,” Gasper said. “They spelled out the situation for us and told us we were going home. We were going to our apartments or hotels and they were going to tell us more later.

“And here we’ve been for the last couple of days. … Out of the blue. They sent us home, and we haven’t been back.”

Gasper has been quarantined with three of his teammates at an Airbnb in theTampa area. It hasn’t been easy, but he’s making the best of it.

“We’ve been staying active, we’ve got a turf field right near us, we went out and threw a football around the other day,” Gasper said, adding they’ve done some body weight work as well. “But we’re also not trying to run into anybody else outside the Yankees organization that we could possibly infect.”

How are they doing for food? Fine, as the Yankees are continuing to feed the players still there.

“The Yankees are taking real good care of us,” Gasper said, adding the Yankees provide three takeout meals a day at the complex. “We drive over at different times, pick em up, bring them back. “Obviously we get a little hungry at other times during the day so we’ve been able to (get) a public delivery of groceries.”

Plus a couple of restaurants have helped, mainly chains. “They’re taking care of us,” Gasper said. “Big companies are being good about it, helping out.”

Gasper is stunned about the whole thing.

“I’m definitely stunned about the coranavirus.and being quarantined,” he said. “This whole corona thing is insane. I wasn’t expecting to possibly lose my season. … You’re pumped up for the season, and the next thing you know it’s in jeopardy, maybe the whole year.”

And Gasper said the best way to deal with it is take things one day at a time.

“Right now, it’s a day-to-day thing,” Gasper said. “Week to week, til March 25. And I know that situation will be, the next step will be assessed the 25th.”

Gasper said the Yankees have an app for their players, plus some conference calls with a doctor the organization made available that Gasper was under the impression works with the World Health Organization (WHO).

“They’ve been open, they’ve been telling us what they know, they let us ask questions. It’s been an open dialogue. It’s easy to get frustrated, but at the same time, it’s just a process you’ve got to keep following.”

As Gasper noted, there isn’t a choice.

“What am I going to do, go home and get my parents sick?” Gasper said. “I’m not going to do that. That would be terrible.”

Gasper said he was glad to see the clubhouse managers still working, mainly handing out the daily meals.

“They rely on us giving them tips,” he said. “It’;s a tough time for everybody right now. They’re not getting paid but they’re still out there doint their job. You see guys complaining on twitter about money and everything; yeah, money’s tough, but its easier to just shut your mouth and do your part to help.”

This couldn’t have happened at a worse time for Gasper, who also starred at Bryant College and was drafted in the 27th round in 2018 after finishing his senior season. He has always been a good hitter, but finding him a suitable position has been sometimes a question. He’s mostly been a catcher, and he had shoulder surgery in the off-season and was just getting back on the field.

Last year he split his season between first the Class A Charleston River Dogs, hitting .233 in 84 games with a .722 OPS and eight homers, 42 RBIs. Then with the Tampa Tarpons of the Florida State League he hit .321 with two homers, 11 RBIs and an .855 OPS in 23 games to end the season.

He was all set to finally get going after an off-season of rehab.

“I was coming back that Friday, having my first live action against pitchers,” he said. “It got canceled right before it.

“I was on pace with my recovery. Heading into spring training I just wanted to be done with my rehab. Be 100 percent ready to go. I was there. I was getting cleared that Saturday to enter games. It was kind of a shot, kind of takes some wind out of your sails.

“I was looking forward to getting healthy and working my way up.”

Gasper figured he would start the 2020 season where he finished 2019, in Tampa. And from there, onward and upward.

“I just want to play my game,” he said. “The (left) shoulder had been nagging me for quite some time, the left one. So I was excited to be healthy for a few season and now it’s put on hold, maybe til July, maybe til June, I don’t know.”

Difficult, indeed. Especially since he feels the surgery would ultimately help improve his defense.

“Now that the shoulder’s fixed, I think my catching will be a lot better,” he said. “My swing is feeling better. See if I could start in Tampa, make my way up to Trenton (Double A), Scranton (Triple A), who knows. The possibilities are endless if I get an opportunity.”

Gasper is happy he’s been in the Yankee organization.

“Absolutely,” he said. “Everything is first class. I couldn’t have asked for a better place to be. The biggest thing that stands out to me is that when I re-aggravated my shoulder, I put in a call to the head trainer, we hit the ground running and I was in surgery in two weeks.

“Then they brought me down early, I got to so some rehab here. They’re first class, they take care of their guys. Kind of makes me angry when I go on twitter and I see people bad mouthing what the Yankees are doing for us, saying the meals are two small, whatever. They don’t have to do that (for the players). They don’t have to do anything for us right now, and they are. That says a lot about Brian Cashman, says a lot about ownership. I couldn’t ask for a better place to be.”

Except on the field rather than in an Airbnb.

Gasper just thinks this would be his year, bottom line, where he’d put his offense and defense together, with the help of new Yankee catching coordinator Tanner Swanson.

“I really do,” he said. “Whenever that duty calls, my catching’s going to be much better. We’ve got a new catching coordinator here. I’m really buying into his new style of catching, a lot of one knee down, just trying to stay athletic. I’ve really felt my receiving has come a long way with this new stance. I’m really itching to try it in games.”

“I think catching is going to get me in the lineup, and first base will be able to get me a couple of extra days, if somebody needs a day off at first, or if they want me to DH. I can bring something else to the table besides catching, but catching is it. I really feel my ability to receive and call a game, my throwing’s coming around, and the sky’s the limit as far as my catching goes.”

Gasper will always be a local favorite. In 2016, with the Silver Knights, he was the Futures Collegiate League offensive Player of the Year. But perhaps his most memorable moment was drawing a walk in the bottom of the ninth against Worcester in Game 1 of the FCBL finals. Nashua was trailing by two, and Gasper was down 0-2 with two out and nobody on. He battled back to draw a walk and then Ryan Sullivan boomed a two-run homer to tie the game. Nashua won it in extra innings and went on to take Game 2 in Worcester for the title.

“Gives me chills thinking about that at-bat,” Gasper said.

But right now, it seems like a lifetime ago. He hopes his last at-bat at the end of the 2019 season doesn’t feel the same as he hangs tight.

“Right now til the 25th,” he said. “Just trying to stay away from everybody. It’s just a weird thing.”