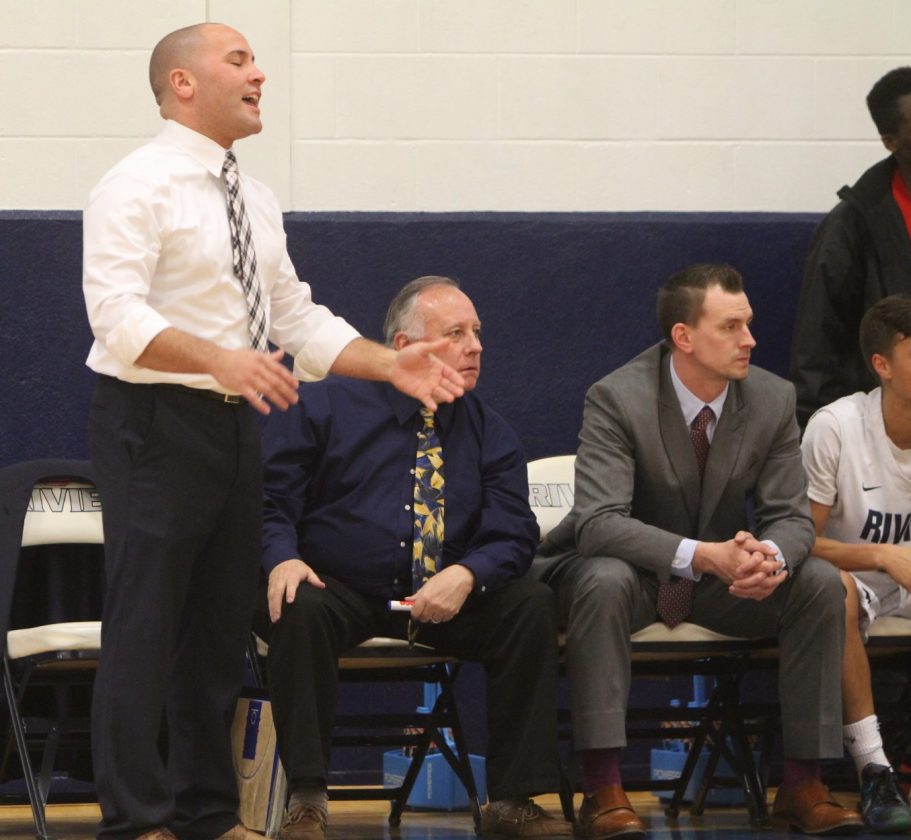 Telegraph file photo by TOM KING Rivier men's basketball coach Lance Bisson, left, and assistant Troy Bowen, third from left, were having a discussion about Kobe Bryant vs. LeBron James Saturday night, and Bisson like other area coaches was stunned to hear of Bryant's tragic death on Sunday.

James had just passed Bryant’s total of 33,643 career points to rank third all-time in the NBA in scoring.

“He is a LeBron guy and I’m a Kobe guy,” Bisson said. “I was saying to Troy that Kobe at 41 is just starting his life (after basketball). He was just getting started in so many things.”

And then Sunday Bisson heard the news of the tragic death of the five-time NBA champion Bryant, his daughter Gianna, and seven others in a helicopter crash in the hills of Calabasas, Cal.

“It literally took me an hour once I heard to believe it had really happened,” Bisson said.

Several other local basketball coaches had the same reaction, and many were texting and talking with their players upon hearing the news. And ironically, Bryant had come up in a couple of their recent conversations as well.

“One of my coaches was talking with our kids about work ethic,” Alvirne High School boys hoop coach Marty Edwards said. “And they were talking about this story on how one of Kobe’s coaches was going to the gym to work with him and he shows up and Kobe was already there for two hours.

“So they worked on shooting for about an hour and a half, two hours. The coach left, and came back the next morning and Bryant was working on his game, and the coach told him he needed to take a break. It turns out Bryant had been there all night. He hadn’t gone home.”

The lesson Edwards and his players were discussing was the fact that “the ones who are truly great use a great work ethic to take their game to a new level. …

“It’s shocking. You can’t believe it. He was such a big presence on and off the court. … Tragic, just tragic.”

“It’s something I’m sure a lot of the other coaches are doing now,” Mazerolle said. “It’s been group texts with the players, and they’re pretty much struggling with it.”

Perhaps more so for the Panthers, as Mazerolle says several of his players are Los Angeles Lakers fans.

“It just makes you sick,” he said. “I was in the middle of texting my team because we have exams Monday and Tuesday and was telling them to study, get their homework done – and I got a text from someone who gave me the news.”

Mazerolle had also heard of Bryant’s legendary work ethic and his own players use the phrase that Bryant wrote a book about, the “mamba mentality.”

“Hopefully they can remember him as not only one of the best of all time but self made,” Mazerolle said. “He was such a bright guy who was so driven.”

“You talk about a guy who left his mark in terms of work ethic,” Bishop Guertin girls basketball coach Brad Kreick said. “The guy was iconic. It’s hard to process it.”

One of the local coaches the tragedy hit home with is Campbell boys hoop coach Frank Girginis. Bryant had coached his late daughter’s middle school team, and Girgninis this fall will be coaching his fifth grade daughter Bella’s youth team. Bryant and his daugher were reportedly on their way to a game/tournament her youth travel team was playing in.

“For me this really hit home,” he said. “This is really, really said. My heart just dropped.

Kreick called Bryant “multi generational” as he had a 20-year playing career and after retiring in 2016 had gone on to win an Academy Award for his work on an animated short film in 2018.

But Bisson still remembers the player he used to root against but grew to be a big fan of.

“When I was in high school,” the former Nashua North standout point guard said, “Kobe was winning championships.

“We were talking about how my players will react. I’ve got multiple players on my team who are still wearing Kobe Bryant shoes. It probably hits them as hard as it hits me.”

“It’s pretty easy to say he was one of the top 10 players of all-time,” Edwards said. “You just hate hearing about things like this.

“It makes you want to hug your loved ones.”