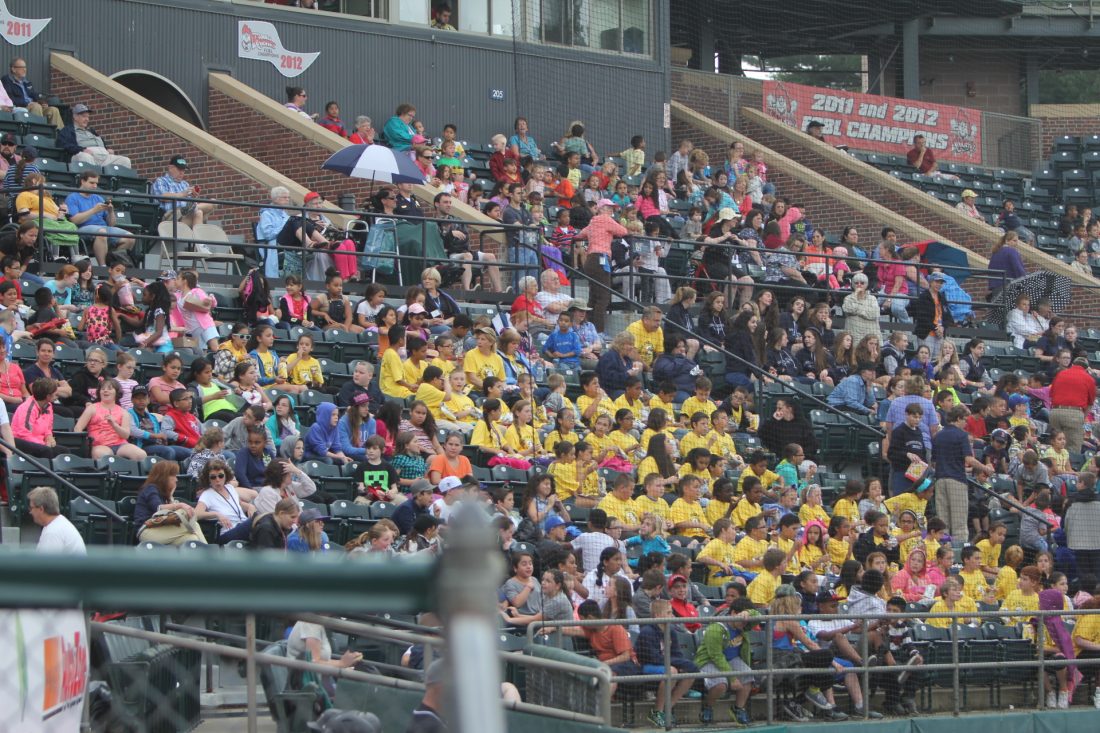 Staff file photo by TOM KING The Silver Kights 2020 season schedule is out already, and the popular Education Day Game is set for Wednesday, June 3.

NASHUA – The Nashua Silver Knights Holman Stadium opener is set in stone for the 2020 season, earlier than it ever has.

The Futures Collegiate League team will entertain its home fans on Thursday, May 28 at Holman vs. the North Shore Navigators. The Knights will open the season on the road at Brockton on Wednesday, May 27.

The Futures League made a bevy of announcements this week, all around releasing its 2020 season schedule earlier than any season in the past.

First, the league announced that New Britain, Conn.will be joining the FCBL, but that it will replace the Bristol Blues, who joined the Futures League back in 2015 with solid ownership and fanfare. That means the league will remain at seven teams for the third year in a row.

Meanwhile, in another big announcement, the FCBL revealed it will play a split season format in 2020, with just four teams making the playoffs.

Here’s a look at all the topics:

The Silver Knights have five Thursdays, four Fridays and four Saturdays. Knights general manager Cam Cook said opening up on a Thursday will give the team a head start on its dollar beverage nights, historically its best promotion.

“That’s huge,” Cook said. “I’m pumped about that. Thursdays we were cursed last year, it either rained or it looked like it would rain all day. A couple of others were gorgeous and we had good turnouts. Coming out of the gates on a Thursday will be great, dollar beer night. The committee did a really good job of getting it out early.

Cook said the team’s loyal fan base has helped the Knights draw 500 to 700 fans on early weeknights, as the team has 11 home games for either Monday, Tuesday or a Wednesday. The team will take that if it can get big crowds on the weekends.

One of those days will be the team’s popular 11 a.m. Education Day game on Wednesday, June 3, when area schools use the Silver Knights game as a field trip. Cook said that later in June the team plans to have a “Higher Education Day” for local high school and college students, likely on a Friday night.

“We want it to be similar to a college fair,” Cook said, hoping to also have recruiters from colleges as well as the military service branches set up on the concourse.

The team’s 28 game home schedule concludes on Sunday, August 2. With the odd number of teams, the Knights will be off 11 nights, including the All-Star break. New Britain will host the All-Star Game on Tuesday, July 14.

Cook said the team hasn’t settled on game times yet, but is eyeing earlier start times than 7 p.m., especially for Friday firework nights.

Here’s how the split season will work: The first half of the season ends on June 30. The team in first place locks up the No. 1 seed for the August playoffs. The No. 2 seed will go to the team that finishes first in the second half. The remaining playoff spots will got to the teams with the next two best records combined.

The one drawback that may be to the split season is if a team clinches the playoff spot early, what will the college players’ motivation be?

“I think, and I talked to Kyle (manager Jackson) about it,” Cook said. “I think it will help because say we go out and crush the first half and get the one seed. Then K-Jax can not overuse any arms, get everyone at bats, so we know exactly we know who we should be using more than someone else for spots.

“I think there’s a lot of younger players, underclassmen on our team.So when they are getting their time, they’ll want to maximize it. A lot of times kids come to these leagues to (help them) fight for playing time (at schools) when they get back in the fall.”

The main advantage, Paolucci said, was to give a team that clinched a playoff spot a month at least to sell their playoff games, rather than have just a week or so.

Cook says that either way, it’s best to have just four teams make the playoffs.

“With a seven team league, I don’t mind it,” he said. “Maybe it’s just the competitive nature in me. It shows you need to be good for a half or the full season to earn that playoff spot.”

The two events didn’t exactly happen simultaneously. FCBL Commissioner Joe Paolucci said the split with Bristol was amicable, and the Blues notified the league it was leaving around the end of August. Paolucci said, unlike the Martha’s Vineyard departure last year, this was an amicable agreement. And he is bound by a signed agreement not to discuss any of the details.

But the Blues are surely headed to the New England Collegiate Baseball League, following in the Sharks footsteps. Blues GM Brian Rooney confirmed the move on the Bristol Press Facebook page. Also, according to the New Britain Herald, the Blues have three years left on a five-year lease. There were whispers about Bristol leaving all season.

New Britain, which had several years of Double A baseball, with the Red Sox and then the Twins as affiliates, joined the independent Atlantic League four years ago after the affiliated Rock Cats franchise moved to Hartford, Conn. The FCBL’s newest team will keep the name in had in the Atlantic League, the Bees.

The team’s ownership group, led by digital advertising businessman Anthony Iacovone, made a presentation at the FCBL meetings on Oct. 5. New Britain Stadium will be the league’s biggest venue with a 6,146 seat capacity. On its last affiliated Rock Cats Friday game in 2015, the place held 8,672 fans.

Paolucci said that he never worried about going down to six teams for 2020, because he has more communities on the radar for the future.

“That never really came up,” he said. “We’ve been working hard with a number of different cities that were close for 2020, but are more likely to be coming in for 2021. I’m confident that next year we’ll be talking about a much larger league.”

Here is the entire Silver Knights 2020 schedule. Game times will be announced at a later date.

Wednesday, May 27 at Brockton

Thursday, May 28 vs. North Shore

Friday, May 29 at Pittsfield

Saturday, May 30 at Brockton

Sunday, May 31 at Worcester

FIRST HALF OF SPLIT SEASON ENDS