Raiders begin another challenging quest for a GNAC title 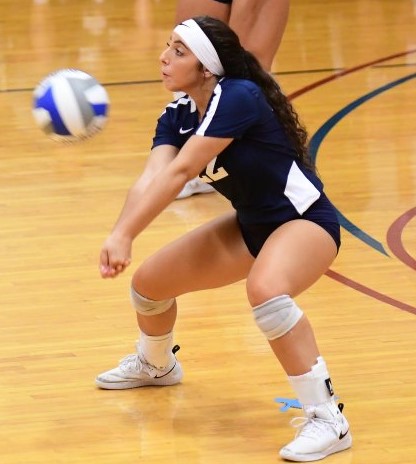 Photo courtesy of Rivier University Rivier freshman Olivia Garand of Litchfield had 11 digs in a win the other night at the Muldoon Center.

Things are now in full swing for the fall season at Rivier University, and the Raider team to watch once again may be women’s volleyball.

Rivier has started out the season 5-4 after Tuesday’s 3-0 win over Gordon College and is aiming to reclaim the Great Northeast Athletic Conference championship that eluded the Raiders last season.

The problem is, hunger alone won’t win the GNAC for the Raiders, who haven’t won the conference title in four years thanks to the domination of Johnson&Wales, the favorite again this year to win it and the automatic NCAA tourney berth that goes with it.

“It’s going to be a struggle,” Kolek said. “J&W is going to be the team to beat, they’re ranked eighth in the nation and nobody in New England has come close to beating them.

“They’ve got some really great athletes and we’ll have to be at our very best against them.”

The Raiders have played against tough competition already, going 1-3 in the Puerto Rico Classic in San Juan. They also lost last weekend to Plymouth State in the Granite State Challenge. But beginning with a win over Washington College in San Juan, they’ve won five out of their last six and begin GNAC play Saturday at 11 a.m.at the Muldoon Center vs. St. Joseph’s (Me.).

What should we look for? The Raiders have two key outside hitters, senior Taylor Dunster (Sutton, Mass.) and sophomore Sydney Racevicius (Woodbury, Conn.). Dunster is a senior leader who was a First Team All-Conference player a year ago. Racevicius may be the key on the floor, for Kolek said, “Basically, as she goes, we go.”

Another senior, middle hitter Jess Whyte (Plymouth, Mass.) is a player to keep an eye on. She led the Raiders in hitting percentage last year and was second on the squad in digs.

“She kind of flew under the radar last year as a junior but she had a solid year,” Kolek said. “And she’s gotten better.”

The question is, have the Raiders? Let’s be clear, though, they weren’t exactly chopped liver as finishing as the GNAC runnerup a year ago, winning 27 matches.

“We should be one of the top two or three teams,” Kolek said, noting that Simmons is coming on as well. “For us, we’ve got some young players on the court. It’s just a matter of getting comfortable and getting some matches under our belts for a young team.”

And two locals are part of that youth as freshmen – former Campbell player Olivia Garand, who had 11 digs the other night, and setter Anna Campbell, a Nashua South alum.

Also at Rivier, the big dedication ceremony of the school’s new Athletic Pavilion will be on Saturday, Sept. 21 at 10 a.m.

The facility is already seeing use. The Raider women’s soccer team had its home opener on Joanne Merrill Field on Wednesday vs. Eastern Nazarene. The Raiders have Nashua South alum Stephanie Case as a senior midfielder and Nashua North grad Sami Blais as a freshman defender

Men’s soccer (0-2-1) has its home opener on Saturday at 3:30 vs. St. Joseph’s (Conn.). The Raiders have Milford junior Mike Federico (midfield/back) and Merrimack freshman Lars Rattunde (midfielder) on the roster.

Here’s a look at what some locals are doing elsewhere:

Nashua’s Katelyn Paquette, a freshman at the New Hampshire Technical Institute in Concord, was named the United States Collegiate Athletic Association (USCAA) Women’s Division II Soccer Player of the week. The freshman center back had a goal and an assist vs. Bryant & Stratton Albany. She’s been a defensive standout for the Lynx, who have yet to allow a goal this season…

Bishop Guertin alum Tommy Ethier of Nashua continues to pace the Bentley University golf team. Ethier, an All-Conference junior, fired a three-under 69 at Keene Country Club as Bentley finished third in the recent 14-team Franklin Pierce Invitational. That was a good recovery from his first round 77, and he finished tied for seventh overall individually with a two-over 146…

Hudson’s Jacen Hudson, a senior on the Umass-Dartmouth football team, had a 24-yard TD reception in the Corsairs’ 54-7 romp over Alfred State last Saturday. The former Alvirne standout had five catches for 77 yards last year…

Merrimack’s Joanne Coffey is a senior on the SNHU women’s volleyball team, and she currently has four kills, 21 assists, and four digs on the young season.