Football is back to being Reyes’ life at UNH 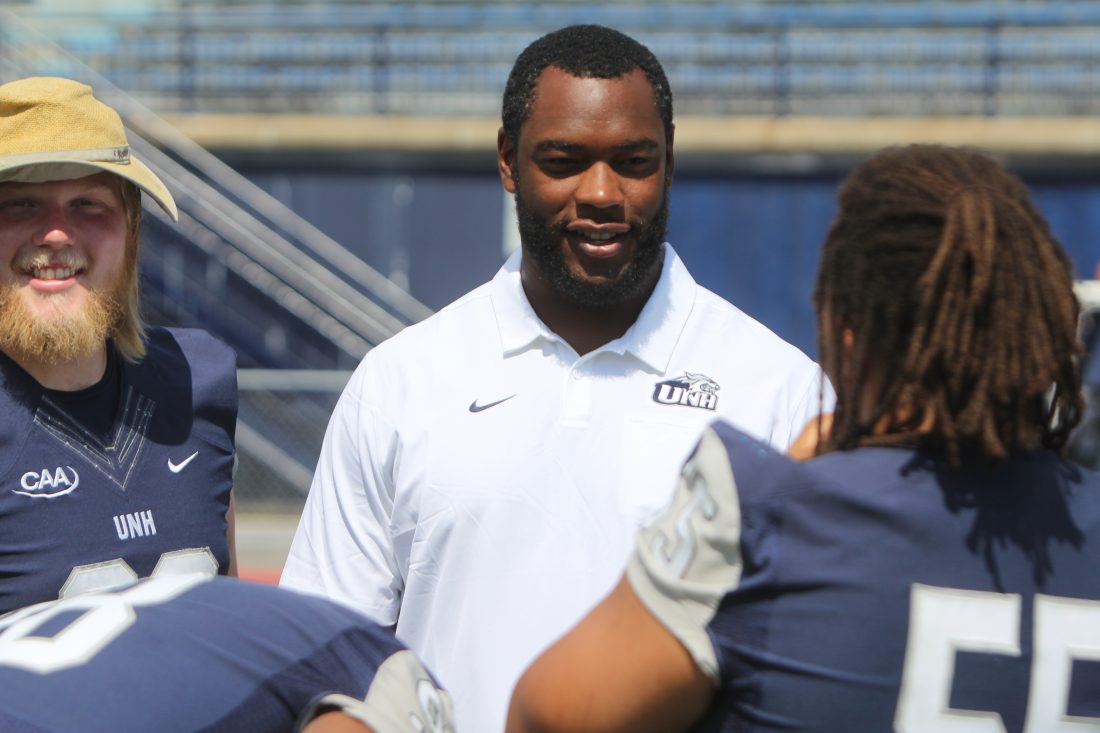 Telegraph photo by TOM KING Nashua's Kendall Reyes chats with a few UNH players earlier this past week in his new job as the Wildcats defensive tackles coach.

DURHAM – Football is back to being Kendall Reyes’ full time job.

“Football is a game that changed my life,” the Nashua High School North alum said. “And I think there’s a lot I can bring back to the game.”

And he’s doing just that. The former NFL defensive tackle who spent five years playing for the San Diego Chargers, Washington Redskins and Kansas City Chiefs, has embarked on a new career – college coaching. Reyes is beginning his first season an an assistant coach (defensive tackles) on the University of New Hampshire football staff.

“Everyone’s been great,” Reyes said. “It’s absolutely incredible. Being on this side, you get to dig in so much more into the game of football, seeing it from the operations standpoint. Know all the thought and everything that goes in to being a coach and running a Division I program. It just makes you respect the game that much more.”

And thus Reyes commutes daily from the Nashua area to Durham, with the full approval of his wife and three children.

The seeds for this go back to the 2016 season, when Reyes signed with the Washington Redskins as a free agent after four years with the team that drafted him in the second round, the San Diego Chargers. He got hurt while with Washington and then was released after the first month of the season, signing later with the Kansas City Chiefs. While playing with the Chiefs, he suffered a wrist injury but continued playing. He finished the season but discovered he’d need not one but two surgeries to repair the wrist.

While rehabbing in the fall of 2017, he dipped his toes into the coaching pond, helping out as an assistant when he could at Nashua North.

That following summer he tried his comeback from the wrist injury with the New York Jets in training camp, but was cut.

“The wrist just wasn’t where it needed to be,” Reyes said. “It took that for me to put it aside that I was finally done playing ball.”

What would be next? Reyes began networking. He made a few calls, let it be known he was hoping to get into coaching, and his former coaches gave him plenty of advice.

There was an opening on the UNH staff, and Reyes pounced on it like he would on a loose football.

“I was able to get to Coach Mac at the right time,” Reyes said. “Right before he could think about it. Timing is everything. I came up, we talked ball, it was good for both sides and that’s kind of how it all began.”

And he’s been at UNH since January.

“I’m just glad I can give back any little piece of knowledge that I do know,” Reyes said. “I’m just glad to be here with a bunch of veteran coaches who have been doing this for a long time, and I’m learning a lot from those guys.”

McDonnell was certainly familiar with Reyes as far back as his playing days at North.

“We recruited him,” he said. “Always from afar, we’ve stayed in touch. … I saw him once, and connected with him again through Jason Robie, the former coach at North.”

So McDonnell called up Reyes just before Christmas and asked him to come by for a visit.

“I talked to a couple of people who coached him positionally at UConn,” McDonnell said. “Nothing but great things. Great feel for the kid. We were fortunate enough to be able to give him an opportunity to coach here.”

It’s a whole different deal than when he was coaching at North. In high school, not every player is really committed; they could be going out for football for a variety of reasons.

In college, they’re on scholarship and football is what brought them to that particular school.

“They’re really here to play football,” Reyes said. “The guys in high school, they could be on the team for various reasons, you’ve got your spectrum. Everyone here, they’ve really bought in. That’s the type of guys Coach Mac recruits, guys who love football and will do anything. That’s the type of environment I like coaching in.”

Plus, the players’ football IQ is a lot more advanced.

“These guys are Division I athletes,” Reyes said. “You can cover it a lot more than you could at high school.

“Really at the high school level, you want to pound in the fundamentals. You still want to do it in college, but then you can take it to that next level, and really get into the nuances at the game.

“That’s something that’s really attracted me to the college level. Just being on the other side of it, that’s what playing in the NFL is all about – the fundamentals and the smaller nuances of the game. That was definitely the route I wanted to go.”

What does McDonnell see from Reyes The Coach?

“One, I see a guy who’s pretty knowledgable,” he said. “Two, I see a guy who can teach, and kids respond to it, and three, a guy who brings instant credibility to the position because he’s played it and coached it.

“The great thing about our program is the developmental program. When we were talking to Kendall in high school, he weighed probably 205 pounds. When he came walking through the door and they found out he was a wide receiver/safety at the B.C. Camp, jaws were on their knees. He’s a little bit bigger than that right now.”

Reyes was certainly recruited by schools when he was at North before choosing UConn and developing into a bigger, stronger player at defensive tackle. So now he’s on the other side of things, as recruiting is part of the job.

“Really, when it comes to recruiting the kids, here we’re very open and honest, that’s how Coach Mac runs his program,” Reyes said. “That’s how we treat these kids, and the kids that come here they truly respect the openness and honesty we have with them.

“This job is football and recruiting,” said Reyes, who was on the road in the late spring and then hit various football camps during the summer.”

But it’s a lot different now than it was when he was being sought after by colleges as a player over a decade ago. Social media either didn’t exist or was in its infancy, and that’s a huge recruiting tool now.

“It was definitely different,” Reyes said. “Recruiting has definitely changed a lot with social media, electronically. When I was getting recruited, I might hear from a school now and then, but now the way you can keep in contact, I think it’s a good thing. You’re able to reach more people, and be able to expand the program a little bit more. It’d definitely different, but it’s all fun.”

As he said, Reyes has put to rest the idea he will ever play again, but he said every young coach still has that tug.

“That’s on all the coaches,” Reyes said. “Once anyone plays football, you still think you can play. Talk to our strength coach (Paul Chapman, in his 18th year), he still has dreams about playing football. That’s how we’re wired. That’s why we do what we do. Football is just part of who we are.”

Where does Reyes think this will take him? Would he ever like to be a head coach? Not so fast. He’s letting the journey take him wherever it’s meant to.

“I guess, sometimes I just like to lock in and let things naturally progress where they are,” he said. “That’s kind of how I’ve always been, even when I was coming out of high school and college.

McDonnell said the value of his experience not only in the NFL but at UConn will help in his coaching.

“This guys’s got experience that way,” McDonnell said. “Now just got to make sure that experience comes through teaching and coaching.”

And Reyes is definitely in his version of football heaven.

“Coaching is a natural fit for me,” Reyes said. “And like I said, it’s a great opportunity. I’m extremely blessed and humbled just to be in the position I’m in.”

All football, all the time. Kendall Reyes is back in a world where he belongs.