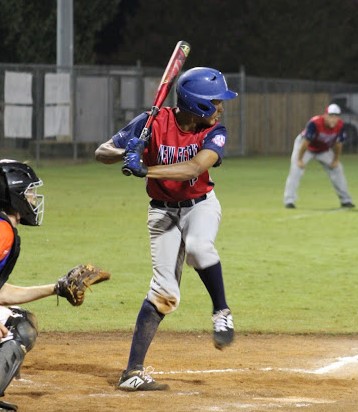 They had great pitching and defense on Monday night, but were the victims of the four-hit shutout pitching of West Linn, Oregon’s Max Allen in a 3-0 loss in their final Black Warrior Division game in the 14U Babe Ruth World Series in Demopolis, Ala.

The defeat left Nashua at 1-3 and fourth in pool play and eliminated. West Linn advances to the single elimination bracket play with a quarterfinal vs. Broomall-Newtown, Pa.tonight.

After getting their first win in the Series on Saturday night, Nashua suffered two straight defeats.

“Again, not our best,” Nashua coach Todd Holbrook said. “… (Allen) didn’t even have a curve and it looked like we were waiting for him to throw one. Never thought a kid just throwing fastballs would shut us down.”

But a walk, hit batsman, wild pitch and then a rundown allowed a West Linn run to score in the first. As Holbrook said, “We gave up a run for no reason.”

It stayed 1-0 until West Linn’s Ryan VandenBrink doubled in two runs off Nashua reliever Nick Shaw in the sixth to give Oregon two insurance runs and a 3-0 lead.

Earlier, a diving catch by Nashua center fielder Ian DeLuca saved a run in the fourth and the locals were very much alive.

However, offensively, Nashua left six on base, including two in scoring position in the third and one in the fifth. Nashua also had runners on second and third in the sixth thanks to hits by Isaiah Headquist and Shaw but Allen got a ground ball out to end the threat, the game, and the Nashua Babe Ruth Stars’ incredible summer run.

Allen finished with five strikeouts. The locals simply had trouble scoring runs in this tournament, outscored 27-8 in the four games, plating just one run over the final 14 innings.

“We did hit a couple balls on the screws, but right at people,” Holbrook said. “They (Oregon) deserved to win.”

In the other quarterfinal today, Jeffersontown, KY. (Ohio Valley), the third place team in the Tombigbee division, will take on Eagle Pass, Tex., the second place team in the Black Warrior Division at 5:30 p.m. EDT. The winner gets Chandler, Ariz. , the Tombigbee Divison first place finisher, Wednesday at 5:30 p.m. EDT. The winner of the late game tonight gets Black Warrior champ Fort Caroline, Fla.in the other semi Wednesday at 8 p.m. EDT.

The finals are Thursday at 7 p.m. EDT. Ft. Caroline bested Eagle Pass in the battle for the Black Warrior top seed, 11-1 on Monday. Fort Caroline has scored 49 runs in their four pool play games.

One Orgeon parent reportedly drove 42 hours over three days, some 2,540 miles to Demopolis see his son play in the tourney…

Demoplis usually, according to the Nashua parents, usually shuts down around 8 p.m. but the town extended hours for restaurants and some laundromats…

There were no homers in the pool play portion of the tournament, thanks to good pitching plus the dimension of the ballparks. Soggy Bottom Lodge Field, for example, was 320 down both lines and 390 to straightaway center.