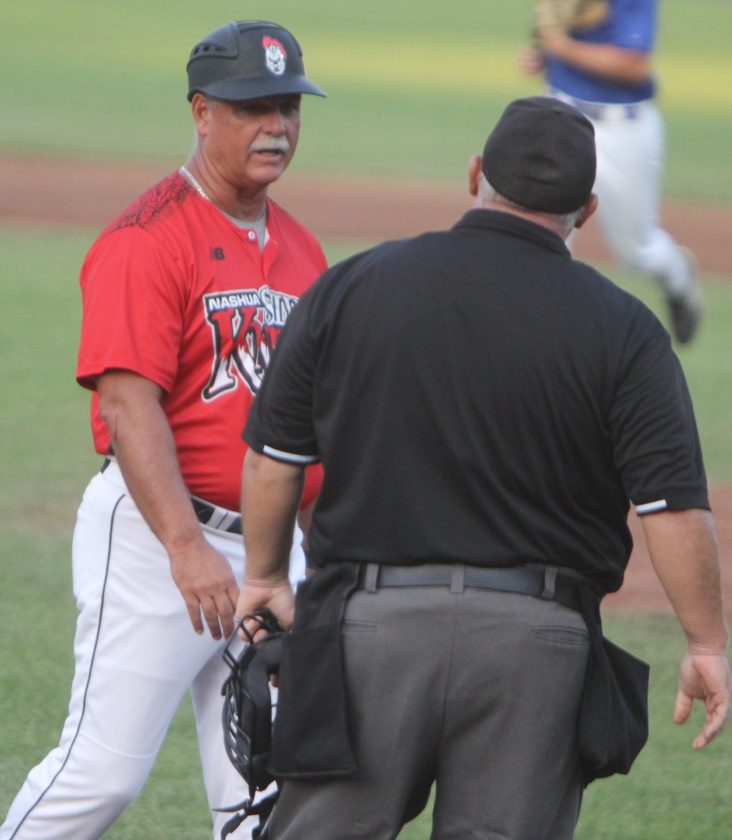 Depending on if they can get a home playoff game, Thursday night’s 7-6 win over the North Shore Navigators before a crowd of 1,883 may have been the last Nashua Silver Knights game B.J. Neverett will have manged at Holman Stadium.

Neverett made it known before last night’s game that he informed team owner John Creedon, Jr. that he is stepping down as manager after the season/playoffs and also as vice president in charge of player personnel.

It will be a complete break from the organization.

“It’s really time,” said Neverett, who was in charge of player procurement for all nine years of the club’s existence, but also managed for five seasons. “I’m going to be 60 in the spring, and have been coaching for 35 years, high school and here. I spent the whole decade of my 50s in this league. Fifty-six games in the summer. … And there’s been some frustration with the roster, some frustration with the kids. I think I’ve done all I can do here.”

“I look up there, there’s four banners,” Neverett said. “They’re not going to take that away from us.”

Neverett worked the first eight seasons for previous owner Drew Weber before Creedon bought the team in March and immediately announced Neverett would stay on.

“I loved working for the Creedons,” Neverett said. “They’re great people. A lot of class, they’ve given us every resource possible to be successful.”

“B.J. Is a class act,” Creedon said. “He’s been as solid for this organization as I could have hoped. It’s hard to see someone of his stature, leadership and value move on. But I completely respect where he’s coming from.”

And where Neverett is coming from is that the last couple of seasons have taken their toll. Neverett had grown increasingly frustrated with college coaches sending the Knights injured players and recent high school graduates.

“If I owned this team and I looked out on that field, I’d fire myself,” Neverett said. “I haven’t done enough. … The last two years, when I had a chance to add on, I just never got a guy that could help us. We’ve had that in the past, and it wasn’t happening. I wasn’t getting the support from some of the colleges that had been giving us support. Some of the players they’ve been sending us weren’t quite what we’d have in the past.

“But that’s not to slight these kids (this season). They’ve done the best they possibly could.”

What’s next? Creedon will let things settle after the season before deciding how to go forward with the baseball operation. Neverett got the players and managed them, and it remains to be seen whether one person will hold both jobs.

Also, Neverett has been grooming pitching coach Kyle Jackson as his successor, but Creedon again didn’t want to speculate on any succession plan. Jackson clearly wants the job. “I’ve been preparing for it for six years,” he said Thursday.

“It’s early,” Creedon said. “We’ll let the season finish out, hopefully land on top. … and we’ll sort of take stock and make those decisions in due time.”

If Nashua wins a first round playoff game on the road Monday, the Silver Knights would get at least one more home game as part of a best-of-three semis. But whenever the season ends, an era will end with it for the Knights.

“You’ve got to know when it’s time to go,” Neverett said. “And this is the right time.”

If Thursday was indeed to be Neverett’s final home game, the Knights rewarded him by rallying from a 4-0 first inning deficit.

They got four in the third, keyed by a two-run Dylan Jones triple, and three more in the fourth to make it 7-4, two coming in on a Phoenix Hernandez double.

North Shore’s (30-23) early lead was mainly due to a Keagan Calero first-pitch three-run homer off Knights starter Cooper Anibal and scored two in the seventh off the Nashua pen to close to within a run.

But Knights reliever Kyle Skidmore retired the Navs’ Colin Wetterau on a close play at first for the final out in the ninth with the tying run at second. It was Skidmore’s fourth save. Dover’s Griffin Young (4-1) picked up the win in relief of Anibal, coming in in the second.

And now the hope is for one more home game, at least.