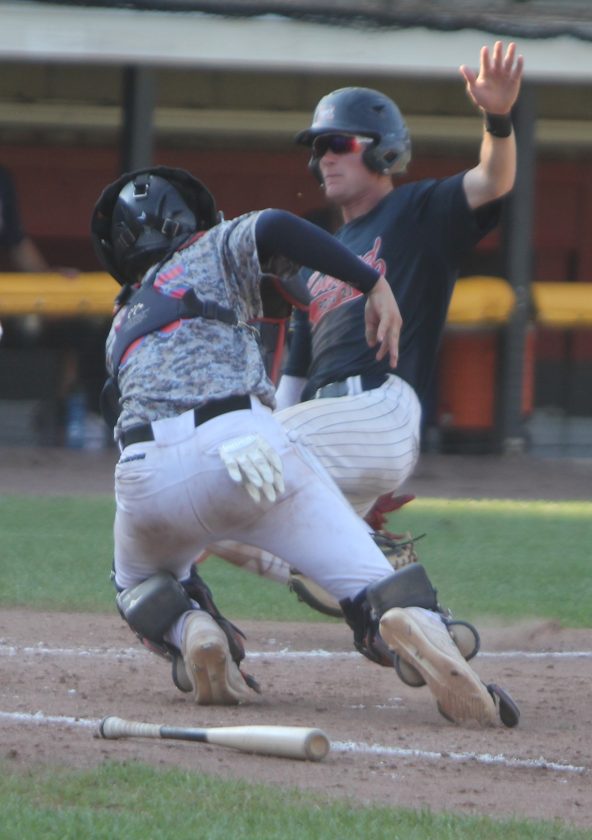 But when the District B-winning Nashua Post 124 and District A-champion Concord Post 21 contingents finally met up in the tourney yesterday afternoon with just four of the original eight teams still alive, it was with Concord on the verge of removal from the double-elimination tourney and the Nashuans sitting in the proverbial driver’s seat at a perfect 3-0.

However, neither team could have expected what happened in their Monday contest, in which 25 runs were scored before the second inning was even complete. And in the end, a little less than three hours after the seven-inning game began, the Nashuans had a 16-13 victory.

The scoring was non-existent through the final four frames, after the two teams had combined for a jaw-dropping 29 runs on 25 hits in the first three. And Nashua benefited hugely from the relief pitching of Dante Young who stifled the Concord offense down the stretch.

“You had the first three and then the rest.”

The host Nashua bunch bounded into Monday’s heat and humidity having defeated Laconia, Lebanon, and Exeter between last Friday and Sunday and boasting a truly superb 18-2 record.

Concord sat at 16-5 and with its campaign on the line rolling into Monday having bested Portsmouth, lost to Exeter, and then remained alive with a slim win over Rochester between Friday and Sunday.

Lunn and his crew began the Concord contest knowing that they would be playing at least one game today – and perhaps two – depending on whether they sent the squad from the state capital packing or not. The late Monday game featured Portsmouth and Exeter – both with one loss – as the tournament moved toward its final round today.

Nashua starting pitcher Joe Berman struggled with the strike zone and the stifling heat early on, and a handful of walks and one infield hit knocked him out of the game before that frame was complete.

Reliever Trevor Kelly came on with the bases loaded, two outs, and his team trailing 3-0. And he was greeted by a two-run double off of the bat of Trevor Smith which made the score 5-0.

However, Nashua’s response in the bottom half of the first had to be seen to truly be believed.

The undefeated hosts scored 13 runs on nine hits against three shell-shocked Concord pitchers – batting around twice – in turning a big deficit into a huge 13-5 lead in just a half inning.

“When they came in after the top of the first I told them to just go out and get a few (runs). But we got a lot more than a few,” said a grinning coach Lunn.

The hosts got right down to the business of a comeback in that bottom of the first, loading the bases with one out against Concord starter Jackson Sullivan. The locals got on the board with a run-scoring single to right field by Kyle Hsu which moved everyone up a base, and Nick DiRenzo then drew a walk which plated Brett Anderson from third to make it a 5-2 game.

An error on Nate Therrien’s high-bouncing ball to second base allowed two more Nashua runners to score, making the score 5-4. And Concord hurler Sullivan was promptly lifted from the game like his fellow starter Berman. And the hosts greeted reliever Kyle Hill by pulling off a double steal which plated the tying run.

Nashua then went up 6-5 – with just one out having been registered – when Jake Smith stung a single up the middle to plate teammate Noah Therrien. And the hosts went up 7-5 a moment later on Max Mello’s opposite field single as the Nashuans began their second time through their batting order.

But with its season on the line, Concord refused to go away. It tallied seven more runs in the top of the second on five hits, an error, and a bases-loaded walk, and trimmed its deficit down to 13-12. And all of a sudden the teams had scored 25 runs without even completing two innings.

Nashua got two of the runs back on four hits – and made Concord use its fourth pitcher – in the latter half of the second to make it a 15-12 game.

The visitors smacked out three more hits in the top of the third but only managed one run in making it a 15-13 game, and Nashua got that run right back in the bottom of the inning on a Brett Anderson RBI single.

Trevor Kelly, who had battled his way through to the fourth, wound up coming out of the game in the top of that inning in favor of reliever Dante Young. And Young found himself facing a situation in which there were two men on and nobody out with his side leading 16-13. But he got a fly ball out and two strikeouts to put the very first zero up on the scoreboard.

And Young enjoyed the first 1-2-3 inning of the day in the top of the fifth thanks to some stellar defense behind him.

It looked like the relief hurler’s teammates were going to give him a bit of breathing room in the latter half of that frame when they loaded the bases with nobody out. But Concord reliever Jake Knowles shut down the threat.

Concord got two men in scoring position with two out in the top of the sixth, but Young and his defense continued to hold up the stop sign. And the Nashuans would tuck the hard-fought victory away in the top of the seventh behind their reliever’s stellar performance.

“Dante gave us huge, huge innings,” said coach Lunn. “Nobody was able to put up a zero before he came in, and he put up four of them.”

The final game line showed victorious Nashua with 16 runs on 18 hits with two errors and 11 men left on base. Concord tallied 13 runs on 13 hits with three errors and nine runners stranded.

The locals now face what they hope will be a final, tourney-ending game this afternoon at 4:30 against the winner of last night’s Portsmouth/Exeter battle. If needed, the Nashuans will play a second game starting at 7 in their hunt for the 2019 crown.