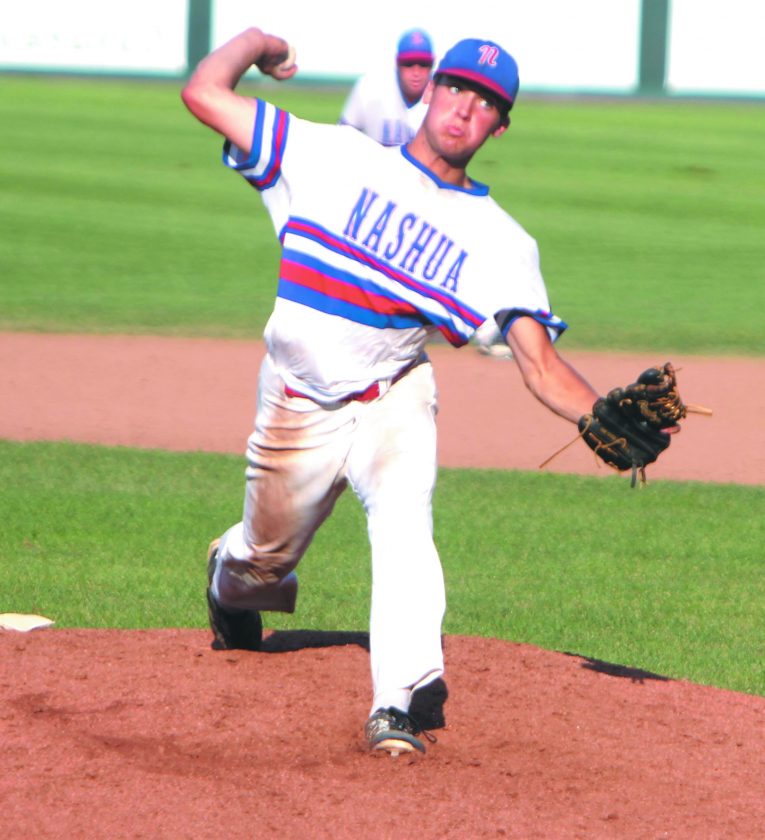 Telegraph photo by TOM KING Nashua Legion pitcher Henri Boudreau looks determined during his team's 12-2 win over Dover on Tuesday at Holman Stadium. Boudreau, between Post #124 and Hollis Brookline has gone 11-0 this spring/summer.

Now we get to see if Tim Lunn’s crew can finish the job.

The top seed overall, with a 15-2 record in District B play, Nashua opens play in the fourth game of the day on Friday at 7 p.m., against Laconia, the No. 4 seed in District A entering with a 9-9 mark.

Concord was the District A regular season champ at 14-4.

For Post 124, the goal is pretty simple. Win and stay in the marquee game of the day at 7 p.m., straight through Tuesday’s title game.

It’s easier said than done with the competition here.

“I think you have to keep Rochester in mind. They are the four-time defending champs,” said Nashua manager Tim Lunn, whose team has made this tournament three straight years now. “They care about Legion baseball with guys who want to be here and know how to be successful in this tournament. Exeter is a team to look at, too. They don’t make many mistakes at all, and that’s what wins in a tournament like this. Coming from the other side, Concord should be very tough, too. Really it’s anyone’s tournament.”

Lunn’s crew has been busy this summer, playing a total of 36 games. That takes pitching, and Nashua is pretty deep.

“We have 10-12 guys who can throw. That helps us,” said Lunn. “It gives me a good feeling heading into this weekend, know we have to play each day. We are going to need everyone to throw.”

Lunn will be handing the ball to lefty Brett Anderson, the Gatorade State Player of the Year for Bishop Guertin this spring, in the opener.

“You have to win Game 1. You have to roll your best guy out there,” Lunn said.

The manager would love to keep his pitch count at a minimum with eyes on rolling him back later in the weekend.

For that, Post 124 will need to score runs, something at has done well this summer.

As a team, Nashua has hit right at the .300 mark, and that’s huge in wooden-bat play. Post 124 closed with 38 runs in its final four district games.

“Hopefully, everyone is hitting the same gear at the same time,” said Lunn. “With our team, we can count on three-to-four guys different guys doing it on a given night.

“I have faith that anyone can come through at any time with this team.”

Zach Finkelstein and Noah Therrien have been the big guns lately, but a tournament like this takes timely hitting from each spot in the lineup.