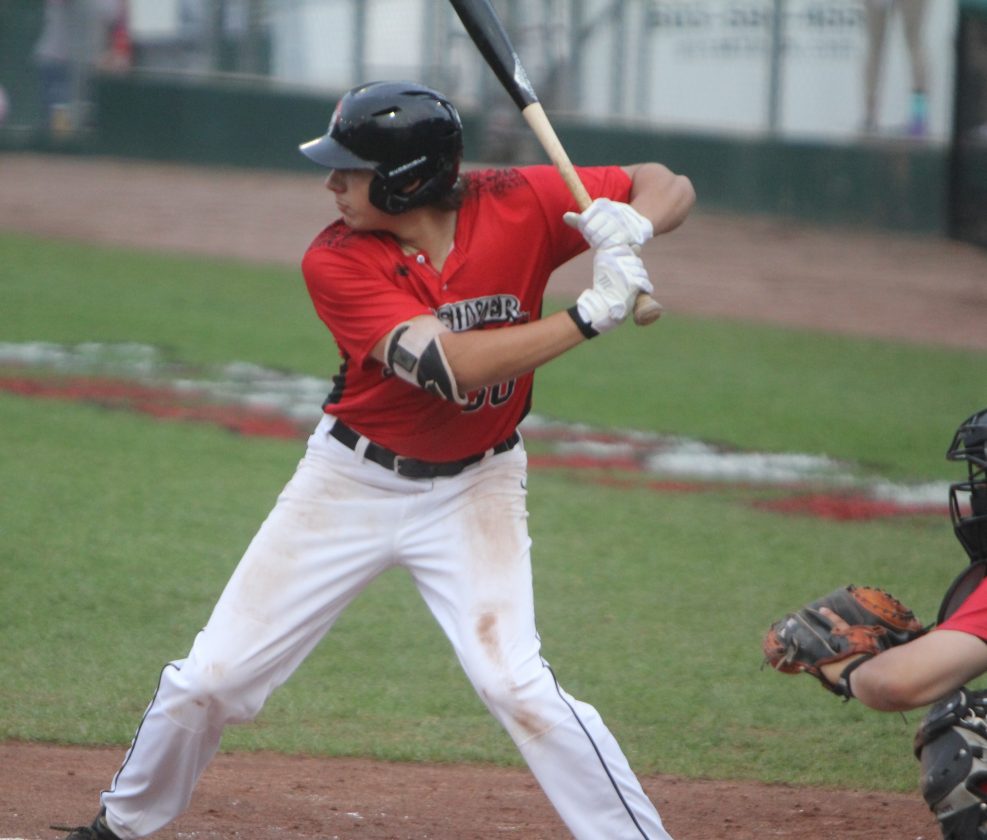 Telegraph file photo by TOM KING Mike La Rocca has been a great addition to the Silver Knights after beacoming a last minute incoming SNHU recruit.

NASHUA – If Mike La Rocca originally had his way, he most likely wouldn’t be a member of the Nashua Silver Knights right now.

Not that he doesn’t enjoy playing for the Knights and the atmosphere of Holman Stadium.

No, no, he loves it here. But, the original plan was for him right now to be preparing to go to the United States Military Academy at West Point.

The Army recruited the Vero Beach, Fla.resident for baseball and he had committed as far back as his junior But in March it was discovered that his allergies – which give the impression of asthma – would be a hinderance.

“I had to de-commit for a medical issue,” he said. “You can’t have asthma after your 13th birthday. I never even had asthma, I had seasonal allergies and had to use an inhaler. But I was in academically and everything else.”

La Rocca persevered. He’d been working out with former Nashua Pride player Chris Torres, who had been the manager for the now-defunct FCBL Old Orchard Beach franchise. Torres recommended La Rocca to SNHU, and SNHU recommended he play this summer at Nashua.

“I was disappointed but I had to move on and find out what was best for me,” the 6-3, 210-pound Silver Knights first baseman said. “I took a couple of months. I had to scramble a little bit to find out where I was going to play.”

La Rocca came up to Manchester in the spring and worked out with the Penmen coaches and was signed, sealed, delivered. “I loved the campus and everything about it,” he said.

“He’s a really bright kid, really smart,” Silver Knights manager B.J. Neverett said. “He’s got a good swing, boy. When I watch him swing the bat, he’s standing up at the plate, I start having flashbacks of (former Knight) Chris Shaw. He makes some contact like Chris used to.

“But he’s still learning a little bit at this level, for sure. But he’s going to put up some really good numbers at SNHU.”

La Rocca just graduated from John Carroll High School in the Vero Beach area, but was fit in under the FCBL’s incoming freshmen rule.

“He’s strong, too,” Neverett said. “He’s got a good upper body, he’s very strong. I’m hoping when they get him up to school they’ll work on his legs a little bit, get his legs stronger. He’s going to put up some good numbers, especially at SNHU. That fence in right (for a lefty hitter) isn’t very deep.”

His All-Star break numbers for Nashua: .266 with a homer, seven doubles, a triple and 10 RBIs,including two big RBIs in the nightcap of Sunday’s doubleheader sweep of Pittsfield. He certainly went into the All-Star break with a bang.

The irony was La Rocca never really had thought about going to a service academy until Army came calling. The more he looked into it, the more he liked the idea. “A little scary,” he said of joining the military, “but I was willing to do it.”

But all’s well that ends well. And La Rocca feels he’s getting valuable experience early at the collegiate level in Nashua.

“It’s been great,” he said. “It’s helped me get adjusted to college level pitching, and adjusted to the area, too. So it’s perfect.

“Getting used to higher velos (velocity) and better breaking balls, that’s probably the biggest adjustment. I’ve always been good at hitting higher velocities but getting used to the better breaking stuff, and recognizing that when (the ball) is out of the pitcher’s hands, that’s probably the biggest adjustmen for me. And the game’s a little faster. I think I’m getting it.”

“When they worked him out at SNHU, they were like ‘Wow’,” Neverett said. “So they called us right away. We had a need for a bat, so we said, ‘Sure, OK’. That’s how it all worked out.”

The irony is that if La Rocca had stayed in Florida for the summer, he’d probably just be doing field workouts , the way players in New England do in January through March. Because of the heat, there’s not much summer baseball in Florida. They’re out on the field playing games by mid to late February in the Sunshine State.

Ironically, the athletic La Rocca had another favorite sport growing up – hockey.

“It’s more popular (in Florida) than you might think,” he said, adding he played it up until the eighth grade when he focused on baseball for high school.

He was a defenseman, and his parents are from the northeast, so they encouraged hockey. In his youth, he grew up in Plantation, Fla, about 10 minutes from the Florida Panthers home, now called the BB&T Center.

And the youth hockey was pretty good.

“We came up and played in tournanments in Boston, Philly, and Canada,” La Rocca said. “There’s actually less kids, so you get the best kids in Florida (on those travel teams). We did pretty well.”

Every now and then, La Rocca misses hockey. But that’s OK, now that he’s spending the next four years in New Hampshire, he’ll get his fill.