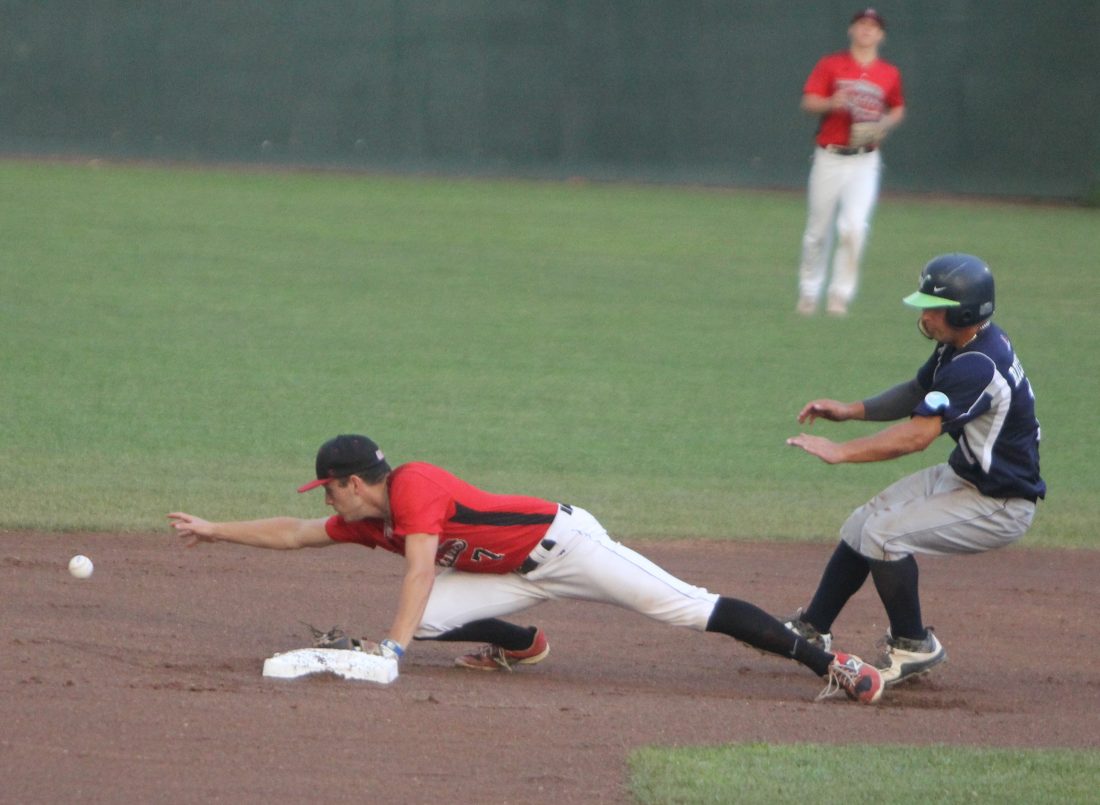 Telegraph photo by TOM KING Nashua's Noah Lucier reaches for the ball duirng a steal attempt by Worcester's Mariano Ricciardi during a recent game at Holman Stadium.Lucier appears to have seized the shortstop job as the team settles on its lineup for the stretch run.

NASHUA – Nashua Silver Knight fans, get up and stretch.

The home stretch, if you will, for the 2019 season starts as the team returns after the All-Star Break to visit sister franchise Worcester tonight in Worcester.

That starts the final 15 games of the season, and while it appears the Knights (20-20 will make the playoffs, especially after Sunday’s stunning doubleheader sweep of now second-place Pittsfield, it’ll be a question of when and where.

They lead last place Westfield by seven games, six in the loss column, for that last playoff spot. Seeing how the season has gone, Nashua would have to get really cold and Westfield really hot for much of that to change.

But in doing itself a huge favor by winning four of the five games on the pre-All-Star homestand, have the Knights put themselves in position for maybe a first round bye (top two spots) or at least a home play-in game? The last two seasons, Nashua has had to play that game on the road.

Again, it would take a major hot street to grab one of those top spots, as there are four teams to jump over. But a home game is a possibility.

Either way, Silver Knights manager B.J. Neverett has his sights set on one thing. Wherever it is, whomever it’s against, just win that first round game and get into the semis. One step at at time.

“I think the thing is, the reality here is, I know it’ a seven team league right now and one team’s not going to make the playoffs,” Neverett said. “The second half, the only thing we’re concerned with is clinching a playoff spot, period.

“And then if we end up in a play-in game, I don’t care about that, I don’t care where it is. We’re going to set ourselves up to win that game, the best we can. We may have to burn three starting pitchers to do it. The best case for us is try to get a home game in the playoffs, get to a second series. That’s our goal right now, we’re not thinking anything beyond that.”

Neverett feels all that is harder than it sounds. “The first week after the break we have three games at Bristol (July 22, 24, and 27), and we’ve had a tough time with them lately. And the other thing to is after the All-Star Game you start to see guys go home.”

And that’s something to keep an eye on, not so much with Nashua – although top reliever George Welch appears done for the season with an elbow issue. But the word around the league is that Pittsfield will lose a handful of players that have to return to school early. Some of the bigger Division I schools start school in mid-August, and players begin packing it up and heading home.

Nashua appearst to be fortifying its roster. It picked up lefty reliever Kyle Skidmore and righty starter Nolan Collins, the latter who had been playing with Sanford, Me.of the NECBL, to bolster the pitching.

“We’re still adding,” Neverett said. “We still have hope for a couple of arms. We’ll just piece it together, and hope we’ll get more consistent with our at-bats.”

And that’s a key– consistency. Nashua is fourth in hitting at .250 and tied for fourth with Worcester in team ERA at 4.90.

“I can put the same nine guys out tonight as I did last night, and you don’t know,”

Well that core group was on the good side of that roller coaster during the homestand, including with last Sunday’s twinbill sweep.

Nashua has some solid players. Catcher-outfielder Dylan Jones is hitting .336 and has driven in 32 runs wit an OPS of .933. Outfielder Kyle Sandstrom is red-hot, now hitting .331 and has an OPS of .871. Power hitter Jared Dupere’s OPS is .851. The lineup is getting settled. Sandown’s Noah Lucier has taken over the shortstop spot with some revolving at second, and likely Joe Bramanti (third) and Mike La Rocca at the corners.

But the key will be pitching. For starters, Bentley’s Evan Christopulos picked up his fourth win with a sparkling complete game (seven innings) win Sunday in the Pittsfield nightcap. He and Bedford’s Pat Harrington were All-Stars. Bedford’s Cooper Anibal, who for school and work reasons only is available on Thursdays, had a quality start last week. Nashua’s Spencer Bergeron has made three starts in his 11 appearances and has become a big key with an ERA of 1.87.

The bullpen, meanwhile, does need help. The starters have to go deeper than before to help not tax the pen due to injuries, etc. Pitching coach Kyle Jackson has liked what he’s seen lately. Nashua at last look was second in the league in fewest walks allowed, which is critical.

“They’ve gotten a lot better this year,” Jackson said. “The first half they were walking (too many). Now they’re in the zone, throwing strikes. We’re in the top in strikeouts, that’s all I can ask from these guys.”

But Jackson says at this point in the season, things are different going forward.

“Now you have to bear down,” he said. “Throwing down the middle’s not going to work, now it’s trying to execute pitches. It’s a grind.”

With that in mind, Jackson wants his pitchers to pace themselves, and tone down the in-between starts throwing.

“Whatever pitching group in this league is at the top, will win it,” he said. “That’s the way it always is.”

Neverett says the goal is simple.

“The key is it doesn’t matter where we finish, just make sure we’re in,” Neverett said. “We’ll do what we need to do (with pitching) that week before, and in the last three games of the season.”

The Silver Knights have an advantage because they have that final day of the league’s regular season, Sunday Aug. 4, off. Their final home game is Thursday, Aug. 1 and they finish at Worcester and North Shore that Friday and Saturday, respectively.

Neverett has Westfield twice more, both at home. They don’t have to face the Starfires on the road. “It’s a tough place to play,” Neverett said. “If we had taken care of business we would have already buried them.”

But the Starfires have one foot out of the loop. Barring a total collapse, the Silver Knights will be in the post season come early August. The rest is what will be fun to determine.

Neverett feels the Futures League definitely needs to work on holding on to the teams it has, but also get another franchise so it can have eight teams for 2020. That would create a balanced schedule again and teams can take most Mondays off, a night that doesn’t particularly lend itself to big crowds.

Neverett is also concerned about Westfield’s future, because the facility isn’t great and the attendance isn’t great either, although the Starfires report a 982 average paid attendance at last look.

“There’s no possible way they can make any money,” Neverett said. “We’ve been there four times. We were there for a doubleheader and there were 11 people in the stands the first game and 50 the second game.”

There are also very quiet rumblings that the Bristol Blues might be interested in defecting to the NECBL, because of the number of Connecticut teams in the league. But while, after an initial fight to keep Martha’s Vineyard from leaving,the FCBL gave in, it would most likely put up a pretty good fight to keep the Blues.

But all of this is pure conjecture.

“Our league, these guys are businessmen and trying to to draw people and make money,” Neverett said. “How do you run a team as a business and then go to a different league and be a non-profit. You can’t do that.

“I like our league, I like the stadiums we play in, the travel’s not bad, and it’s not as bad as it was when the Vineyard was in it. We just have to find another team somewhere.”

Bedford’s Pat Harrington was named the Silver Knights Player of the Week honors, lowering his ERA to 2.12 after his start last Friday while also being named as an FCBL All-Star…

The Silver Knights are back home on Friday vs.Westfield at 6:45 p.m., the final Fireworks Night of the season. It starts a weekend homestand with Pittsfield back on Saturday (6 p.m.) and Bristol on Sunday (5:05 p.m.). There will be live band pre-game performances on the first base side deck all three nights…