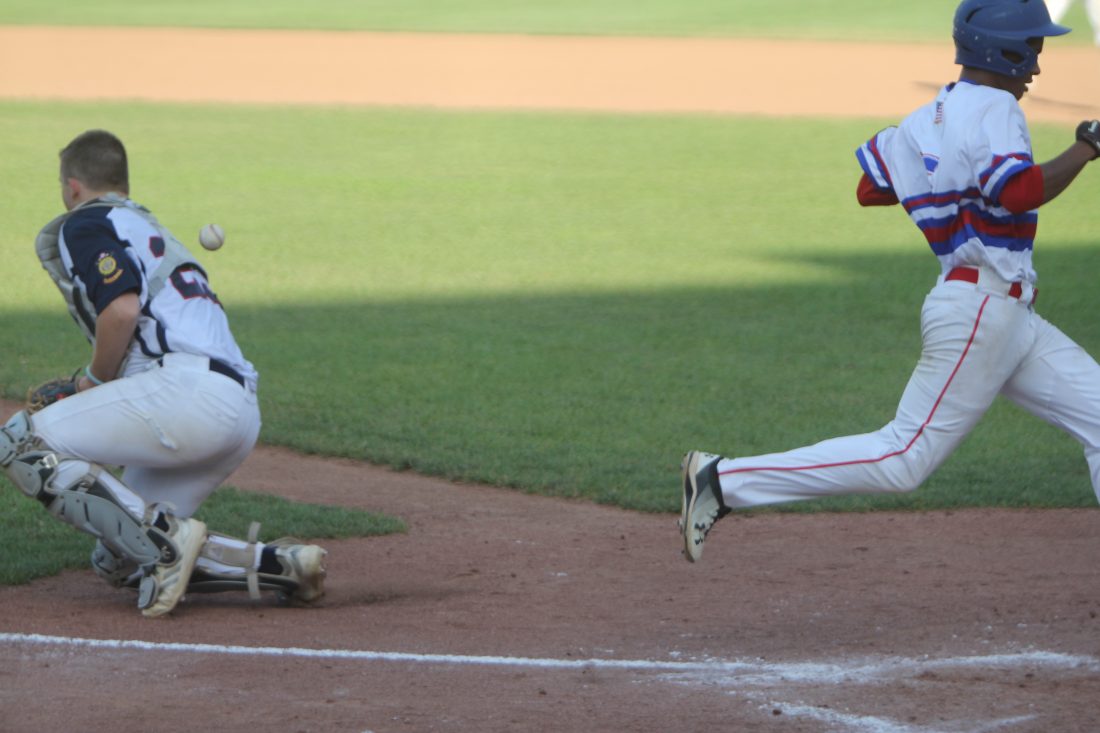 NASHUA – It’s got to feel pretty good to be a member of the Nashua American Legion Post 124 baseball team these days.

With a doubleheader District B sweep, first over struggling Dover 12-2 in five innings and then 4-3 in eight over contender Exeter on Tuesday at Holman Stadium, the locals clinch a spot in the state tournament, but also can take the District B title with three wins in their next five district games.

And beating a tough 12-3 Exeter team certainly had to feel good. Noah Therrien ‘s bases loaded sac fly to left in the bottom of the eighth scored Hunter Routhier with the game winner.

“It’s huge,” Nashua manager Tim Lunn said. “They’re a team that doesn’t make mistakes, they’re solid, and they’re used to winning. For us to beat a team with that pedigree is a good step forward for our program but also for our kids.”

Nashua spotted Exeter a 3-0 lead before tying it up on a bases-clearing three-run double by Nik DiLorenzo off the glove of Exeter right fielder Harrison Lendrum.

Exeter grabbed a 3-0 lead off Nashua starter Zach Finkelstein on back to back RBI singles by Nolan Kilmonis and Christian Petry, plus an error, in the fourth and a wild pitch in the fifth.

“I took my chances,” Mitropoulos said. “Two good teams feeling each other out.”

“I was just hoping to hit it deep and far enough to get Hunter in from third,” Therrien said.

The first game typified how it is the Summer of Henri. As in Boudreau, as he gutted out five innings but also drove in four runs. Boudreau has not lost since the baseball season began back in April for Hollis Brookline High School, as between the two teams he’s gone 11-0.

“I don’t know, it just feels really good,” said Boudreau, who gave up two runs on seven hits and struggled a bit with his control. “Will (catcher Brooks) called a good game and it felt really good coming out of my hand. The fastball wasn’t there for me so I relied heavily on my secondary pitches. The change-up has been a new addition this summer and working in the curve ball.”

“He’s been good on the mound,” Lunn said. “Today wasn’t one of his better days, he wasn’t able to get the power he’s used to.But he’s good throwing strikes, he uses his defense to get out of jams. And we’ve given him the best run support of any of our pitchers.”

Boudreau also had four RBIs thanks to a pair of two-run singles. Nashua, down 1-0 after Dover (4-10, had just nine players) scored an unearned run in the first, got three in the bottom half on RBI singles by Will Brooks and Boudreau.

Nashua broke it open with a five-run fourth, with Boudreau and DiLorenzo knocking in runs, while Brooks and Trevor Kelly were hit by a pitch and walked with the bases loaded.

“I was fortunate to come up with those situations at the plate,” Boudreau said, “and I was seeing the ball well.”

Up 10-2, Nashua ended it with two in the fifth, Finkelstein walking with the bases loaded to drive in the final run.

“It’s hard not to look ahead,” Lunn said. “We’ve got (five) District games left, and if we can win a handful of them we can lock up a certain spot in the tournament. They know all that. They’re doing a good job taking it one game at a time.”

In nine days, both teams will be back at Holman for the start of the Legion tourney.

“That’s (Nashua) a very very good team,” Mitropoulos said. “I’d be surprised if they were not in the final game at the end (of the tourney).”