Neverett doing just fine in the land of Dodger Blue 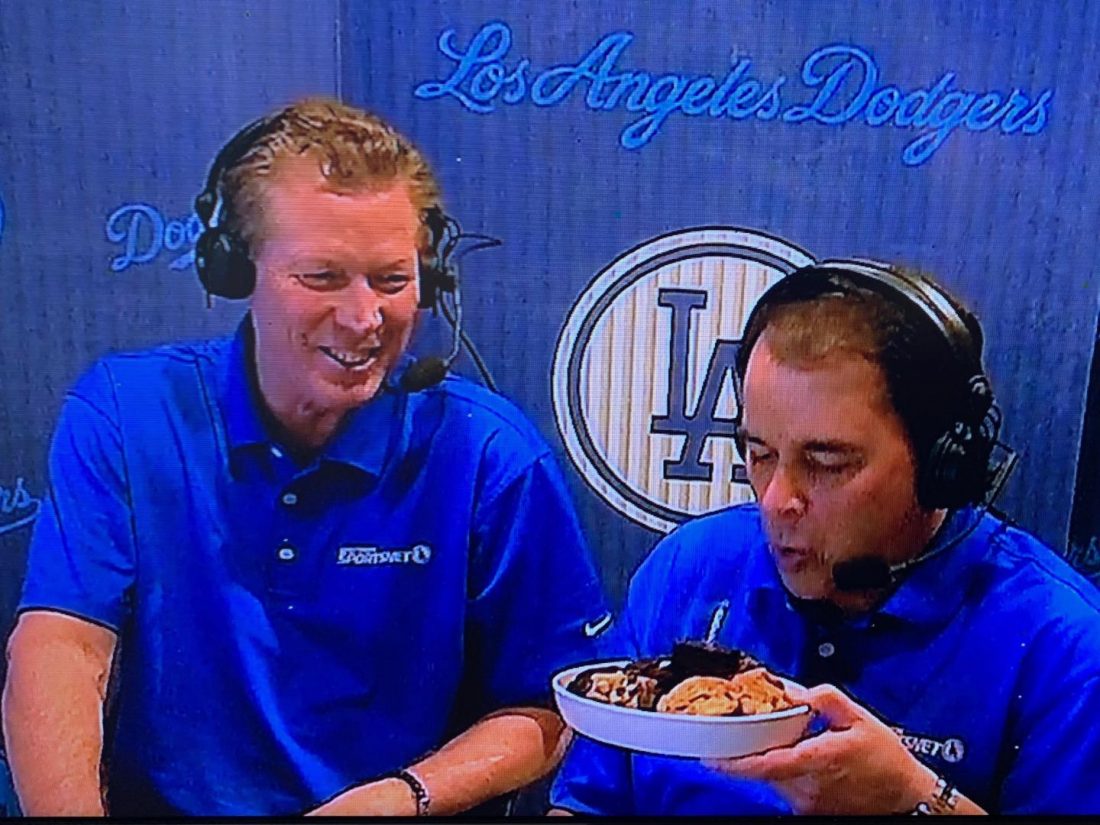 Courtesy photo Nashua's Tim Neverett has had fun so far as a Dodgers broadcaster, including celebrating his birthday on the air during a spring training boradcast with Orel Hershiiser..

Suddenly, someone walked in the booth, while he and Hersheiser were on the air, and put a brownie down in front of him with a candle. It was Neverett’s birthday.

“They surprised me,” Neverett said. “I didn’t know they were going to do that. Nobody’s ever done that for me.”

For Neverett, it was a warm welcome to the Dodger experience.

“The Dodger experience is unbelievably positive,” said Neverett, the Nashua native who opted to sever ties with Entercom Communications and leave what had to be his dream job broadcasting Boston Red Sox games on WEEI and the Sox network, rather than work one more year as what sources said would have been a lame duck. “They’re such positive people. It’s remarkable to have your employer treat you with respect and you feel like you’re wanted. It’s absolutely a 180 degree feeling than I had most recently.

“Everybody in the organization from top to bottom has treated me incredibly well. It’s funny because I kept waiting for something different to happen, and it just didn’t.”

Neverett said that “something” happened last year when he and Entercom officials had philosophical differences about the game broadcasts, and it was made known to him that this current season would likely be his last. Rather than work under those terms, Neverett chose to look elsewhere, and the Dodgers were interested.

Neverett, who has a three-year contract, is back to his comfort zone as he is a Dodger employee. The majority of broadcasters in Major League baseball work for the team/organization, not the broadcast outlet. With the Red Sox, whom Neverett had no problem with, it is different. The radio broadcasters work for Entercom. When he was part of the Pittsburgh Pirates broadcast team before returning home to take the job with Entercom, Neverett worked for the ballclub as well.

“It’s such an incredible feeling to be back working for a team that really and truly understands baseball broadcasting and broadcaster,” he said. “I had that with the Pirates, and I’m so relieved to have that with the Dodgers.”

Neverett feels the Dodgers, mainly due to the longtime work of the now retired Vin Scully, have “the greatest legacy of broadcasters as an organization out of any organizationin baseball. You start with Red Barber and go to Vin Scully, and on the spanish side, Jaime Jarrin, who is in the Hall of Fame. He’s been their broadcaster since they moved from Brooklyn. And he’s going to work every game this year. … He was one of the first guys to call me when I got this job.”

Neverett did a lot of television in spring training but says he will do mostly about two-thirds radio during this regular season, one-third television, which will include some on-field reporting and studio pre-game and post-game work, something he did with the Colorado Rockies.

“You know what’s funny is I didn’t give that aspect any thought when I was out there,” Neverett said, “and I did the vast majority of the games on radio and TV more than the other announcer did. I think that really helped me get versed into the Dodger culture.”

It’s almost culture shock for Neverett. Example: Dodger third baseman Justin Turner told him, “Anything you need, you come to me.”

“I’ve never had a player in baseball tell me that,” Neverett said.

And there even more hospitality with Dodger manager Dave Roberts, who introduced him to the team at a team meeting, and he was even asked to address the team. “That’s never been done,” Neverett said in his experience. “It’s just totally different.”

During spring training, Neverett ran into longtime Reds broadcaster Marty Brennaman, who had a huge smile on his face.

“Welcome back to the National League,” Brennaman said. “This is where you belong.”

Indeed, Neverett enjoys being back in the senior circuit. “I think in New England I’m in the minority when I say I like the pitchers hitting,” he said. “It’s just the way the game is. … I know pitchers can’t hit as well as position players, I get that. But I still say there’s nothing wrong with the sacrifice bunt. It’s been part of the game as long as the game’s been around.

“What’s good too is seeing some of the guys in the National League that I haven’t seen in awhile.”

There are a couple of familiar faces on the Dodgers. One is veteran catcher Russell Martin, who was with the Pirates when Neverett was their broadcaster. Another, of course, is former Red Sox reliever Joe Kelly. “We’ve already had a few good chats,” Neverett said.

Neverett will have some series off, on a couple of occasions he’ll come home to Nashua. But how’s this for irony: He’ll come home for the All-Star break, and then the Dodgers open up the second half of the season at Fenway Park. Neverett will broadcast all of those games.

“I think it will be great to see the people that I want to see there,” he said, “and there’s a lot of those. But right now, I’m all Dodgers right now. When the light goes on and the game starts, it’s all about the Dodgers.”

Neverett does take with him the fact he broadcast the Red Sox winning the World Series. He received a phone call wishing him well from a high ranking Sox official before he left for spring training. “He said to me, ‘They’ll never be able to take away from you the fact you were a part of the greatest Red Sox season ever,'” Neverett said. “And that made me feel good. That’s something I’ll always remember. I’ll have a lot of good memories about the baseball part of things there. … Those people in the Red Sox organization, they’ve been great. My problem was never with the Red Sox organization.

“But after taking time away, and being immersed in the Dodger culture and how they’ve treated me, it reminds me I shouldn’t waste any time thinking about any negatives from the past. Just the positives and the future, and what lies ahead. I think it could be really, really good.”

But the one moment he’s really remembered thus far is when, while in Arizona, Jarrin introduced Neverett to some people as “the new voice of the Dodgers.”

“My knees,” Neverett said, “were ready to buckle. Goosebumps. I mean, how does this happen to me?”