For Nashua’s Ayi, this Super Bowl brings back memories 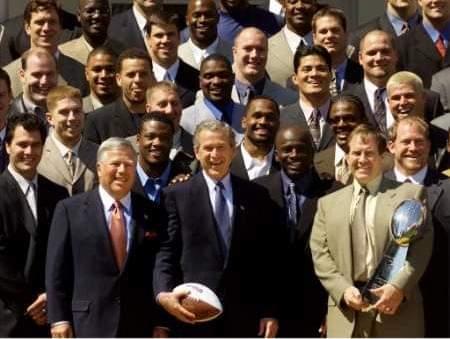 NASHUA – He was a Ram. And then he was a Patriot.

And eventually, a Super Bowl champion.

It was early November of 2001, and former Nashua High School and University of Massachusetts football standout Kole Ayi had to get his luggage off the Newark Airport conveyer ramp before it left to go to St. Louis.

After a whirwind couple of weeks of life in the NFL transaction mixer, that’s where he thought he was headed. The Rams, who signed him as a rookie free agent and were happy with his play, were hoping to keep him after he beat the odds, made the team, and performed well in a special teams/defensive depth role for the first couple of months of the 2001 season. But that October they needed to waive him and put him on the practice squad temporarily because of a roster issue.

Instead, he opted to sign with the New York Giants after clearing waivers. But then after a couple of weeks he was released, expected to clear and re-sign with St. Louis.

But while he was at the airport, his agent called and told him the Patriots had scooped him up. So, instead of going to the team that had actually signed him right after the April draft, he was going, well, back to his backyard. Home.

But the 6-1 linebacker didn’t see it that way.

“I hung my head and said, ‘Uh, New England, really?’ I had been here for 20 years, I knew what the Patriots had been about (more losing than winning). In St. Louis, you were beating everybody by 35. I didn’t even know who the quarterback was (with the Patriots). I knew it was (Drew) Bledsoe but he had gotten hurt.

Well, he found out fairly quickly who the QB was.

Fast forward to last weekend. Ayi said he never really thought of a Ram-Patriots rematch of that memorable Super Bowl XXXVI until both confernce championship games went down to the wire. It took him back to a time he enjoyed – being on a Super Bowl champion.

“Sure, it brings back memories,” said Ayi, now 41 and still living in the area. “I really didn’t think about it until they both went down to the wire.”

He marvels at the game plan designed to physically disrupt The Greatest Show on Turf and their top speed players, like running back Marshall Faulk.

“We were still running the same (defense) but we changed a couple of things,” Ayi said. “I remember looking at (linebacker Larry) Izzo and saying, ‘Is this really going to work?’

“It was just different. We were a lot more physical. Throw yourself at Faulk, don’t let them out of the backfield. I knew how explosive they could be, how dangerous they were. … As the game was progressing, I was saying, ‘This is working out. They’re (the Rams) not blowing them out…I think the whole team believed it from the very beginning. But during the game you had the feeling ‘These guys aren’t going to kick the crap out of us. We got this.’ At least past the first quarter. We were happy we won, but we weren’t shocked.”

Ayi was a rookie, and everything, as he said, was new. The Super Bowl experience was incredible.

“That was really cool,” he said. “The game in New Orleans. Huge fanfare. I understand that year things were toned down because people didn’t want to fly (due to 9-11). It was a little somber.”

Ayi didn’t go in the locker room at halftime but stayed on the field and saw the touching U-2 halftime performance, commemorating the 9-11 victims. “The emotions there, it was almost too much to take,” Ayi said.

“Brady wasn’t even Brady, or not the Brady we know,” he said. “He was just Tom. … He was not the same quarterback. He’s so clinical, so precise. He’s been with the same system almost 20 years. There’s not defense thrown at him that he hasn’t seen.”

Ayi knew Brady when he was simply “Tom”. “There’s Tom, and there’s Tom Brady,” Ayi said, chuckling. “He’s definitely changed. Now he’s the greatest of all time at this point. Definitely different from the kid who used to have the yellow jeep.”

And that’s why Ayi sometimes has to realize that he played for a half a season with the greatest quarterback of all time.

“It’s crazy, because of how I still remember Tom,” Ayi said. “He played at Michigan, I was born on the Michigan campus and grew up a huge Michigan fan. My Dad went to school there. … When I think back to Tom, I knew him as a young guy, not who he is now, not this persona.”

And now Ayi is enamored with the Patriots success, success that he was in on the ground floor for.

“Oh my God yes,” he said. “It’s crazy. At one point it looked like it might be a flash in the pan, they didn’t have a very successful season (the next year, going 9-7). Maybe it was one of those lightning in a bottle, flash in the pan kind of things.”

“It’s amazing that it’s gone on this long,” Ayi said. “With the amount of championships, it’s almost two separate dynasties (2001-04 and 2014-present). I think it was almost a decade in between when they were good but that magic to get into the Super Bowl or win the Super Bowl just didn’t happen.”

“He was demanding,” Ayi said. “Some coaches are demanding cloak it in such a way that you feel comfortable. But he doesn’t care about that. He’s just going to rip you. But he’s demanding but right. Some coaches struggle, they want to be the tough guy, but they don’t get results and it’s tough to motivate 53 millionaires. But he was demanding and paid attention to detail. He really enjoyed things working out, guys doing well.

“He’d even comment on other players. We’d be watching film. This was something I found strange, he’d be yelling at us when other players were doing something bad. But obviously he loves the game of football.”

Does Ayi have an allegiance to one team or the other come next Sunday?

“Let me put it this way,” he said. “I have an allegiance to Tom, to the Patriots organization, at this point.It’s incredible what they’ve been able to do, the longevity. … You almost have to root for the greatness at this point. We’re never going to see this again, and we all know what the Patriots used to be (in the Billy Sullivan-Victor Kiam years).”

Of course, it could have been different had he stayed healthy. Ayi does think of that.

“For sure,” he said. “There’s a lot of great players I played with (in high school, college) that never got a chance to play.”

Or get a ring like he did. That night, after the Patriots won their first Super Bowl, was magical. Ayi’s parents were there, there was a team party afterward. “That,” he said, “was a lot of fun. There’s nothing like being a champion. Only one team gets to do that, and I got to do it in college (with UMass, 1998 Division I-AA national champs) and again in the NFL. You work so hard for something, and tonight, your job is done. We accomplished what we wanted to do.”

There’s more irony to the Ayi story. He was traded back to the Rams at the start of training camp the following season, but had a bad shoulder injury, and his career basically was done. He signed with the Carolina Panthers in 2003 but didn’t make it to the regular season.

Today he has a career in medical device sales.

But this week, he will be. Kole Ayi: Once a Ram, once a Patriot, but – as brief his time in New England was – forever a Super Bowl champion.