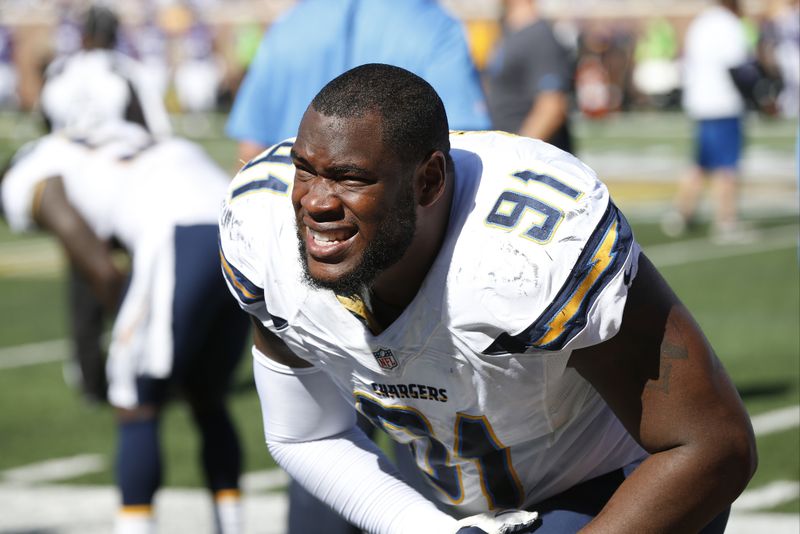 AP Photo Nashua's Kendall Reyes had his best seasons in the NFL playing with the then-San Diego Chargers, and still keeps in touch with a few on the Charger team that will face the Patriots Sunday at Gillette Stadium.

Kendall Reyes remembers his first day at the then-San Diego Chargers headquarters, a day or two after being drafted by them in the second round of the NFL draft back in 2012 out of the University of Connecticut.

The first player he saw was quarterback Philip Rivers.

“That’s the biggest thing about him,” said Reyes, the Nashua North alum who played five seasons in the NFL, also with the Redskins and Kansas City Chiefs and was in camp this past summer with the New York Jets. “He’s a great teammate. He was waiting for me at the door, the first person I saw. He showed me around. He really, really cares about his teammates.”

Rivers is one of a group of players still on the team that Reyes was a standout defensive end for. Ironically, the Chargers never came to Gillette Stadium when he was with them – they missed out in the 2013-14 playoffs, losing a Divisional Round game vs. Denver in January of 2014 that had they won they would have played the Patriots in the AFC title game.

But he is very much into Sunday’s upcoming battle.

“I still follow my guys,” said the 6-4 Reyes, who still lives in the area and right now is working on a career in real estate. “It’s going to be a good matchup. The Patriots are always a tough game. But the Chargers are hitting on all cylinders. They’re more balanced than they’ve been in recent years.

“It’s changed quite a bit since I was with them, but there’s still a couple of guys there.”

One is defensive end Melvin Ingram, part of the bookend pass rush along with second year Charger Joey Bosa.

“They’ve got some great guys up front in Melvin and Bosa, they’re able to make a lot of plays,” Reyes said. “And on the back end, too, especially Adrian Phillips. He’s going to the Pro Bowl as a special teamer, but he’s really had an unbelievable year on defense (as a DB, 94 tackles one interception and one forced fumble).

Of course Reyes is focused on the Chargers defense, since he was a big part of that group from 2012 to 2015, before signing with Washington as a free agent and then a quarter into the 2016 season, after the Redskins released him, he finished the bulk of that season with the Chiefs. In fact, he missed out on another chance to come to Gillette as the Chiefs were upset at Arrowhead by the Pittsburgh Steelers in the Divisonal Round.

Overall he has 146 career tackles and 14.5 sacks. But that last year in Kansas City he played with an injured wrist, which needed two surgeries to correct. He sat out the 2017 season and last July was signed by the New York Jets at the start of training camp.

But Reyes was one of the cuts at the end of camp.

“The Jets experience was good,” Reyes said. “But after the injury I had, it just isn’t quite the same. Playing defensive line is all hands.

“I had workouts with a couple of other teams (after the Jets released him). Who knows what will happen. But I’m not going to call anything yet (as in officially retire).”

But if his career is done, Reyes says that “I had fun. Just playing in the NFL, for the time that I did, was great.”

One thing that he enjoyed was helping out the North coaching staff in 2017, and he went to a couple of games this season. During that 2017 season, he was greatly impressed by a Titan freshman named Curtis Harris, who as a sophomore took off and was the 2018 Telegraph Player of the Year.

“He had an amazing year,” Reyes said. “He’s very poised, very level headed – especially for a sophomore. The sky is the limit for him.”

It was for Reyes coming out of UConn, too. And from what he’s seen, the same may be the case for his former Charger team.