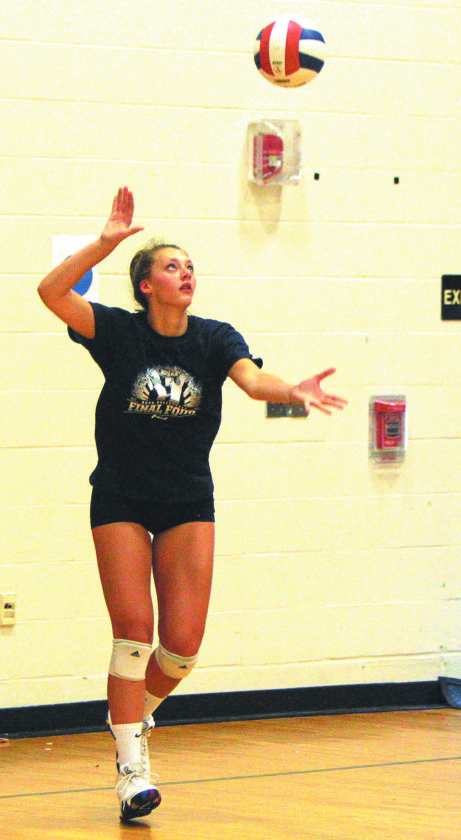 HOLLIS – A native of Tampa, Maddie Norris had her original volleyball roots sprout in the state of Florida.

The Hollis Brookline High School senior is banking that a return to the Sunshine State will bring out the best in her already magnificent game.

Over the summer, Norris, the reigning Telegraph and Gatorade New Hampshire Player of the Year as a junior, committed to play college volleyball at the University of North Florida, a Division 1 school in Jacksonville.

“I felt it was the best place for me because I could play beach and indoor volleyball there.”

Norris had spoken to New England Division 1 coaches and other schools in the South. She went out and showcased her skills at spring and summer tournaments. Ultimately, the phone call to UNF was her best recruiting tool. And it appears to be a great match.

“It all depends on when you find the right school for you,” said Norris, who has the rare opportunity to be a four-time state champ this fall. “You have that feeling you know. And (at North Florida) I knew.”

Getting the college decision completed, long before her first day of school senior year, did nothing to slow Norris down in her training. Complacency might come up on the Verbal SAT, but it’s not in her vocabulary.

It began in the spring where she was the most skilled manager for the state in boys volleyball.

“Being the boys manager and a practice player helps me tremendously,” said Norris “It gives me a different perspective. The way they play is a lot different than girls. It’s fun to see boys who are super athletic and have never touched a volleyball before, and by the end of the season, they’re amazing players.

“I love playing with them, but our girls are super high level as well. I think the volleyball is pretty equal.”

In the summer, Norris hits the sand, but there’s no need to worry about any perspective shark attacks. She’s strictly an onshore type.

“I did a lot of beach training this summer. I love beach volleyball,” said Norris. “I play at New Hampshire Sand Volleyball in Brookline and you can sign up to play in Hampton, too.”

Down the stretch there were two hard weeks of high level camp in the heat of the HB gym before preseason opened over a week ago.

“It’s been a lot of work, and it gets hot in this gym, eight hours a day, four days a week for two weeks,” said Norris. “It definitely makes for hard work and long days. This (type of success) isn’t handed to us. You have to work at it.”