Silver Knights hope pitching can take them to playoffs 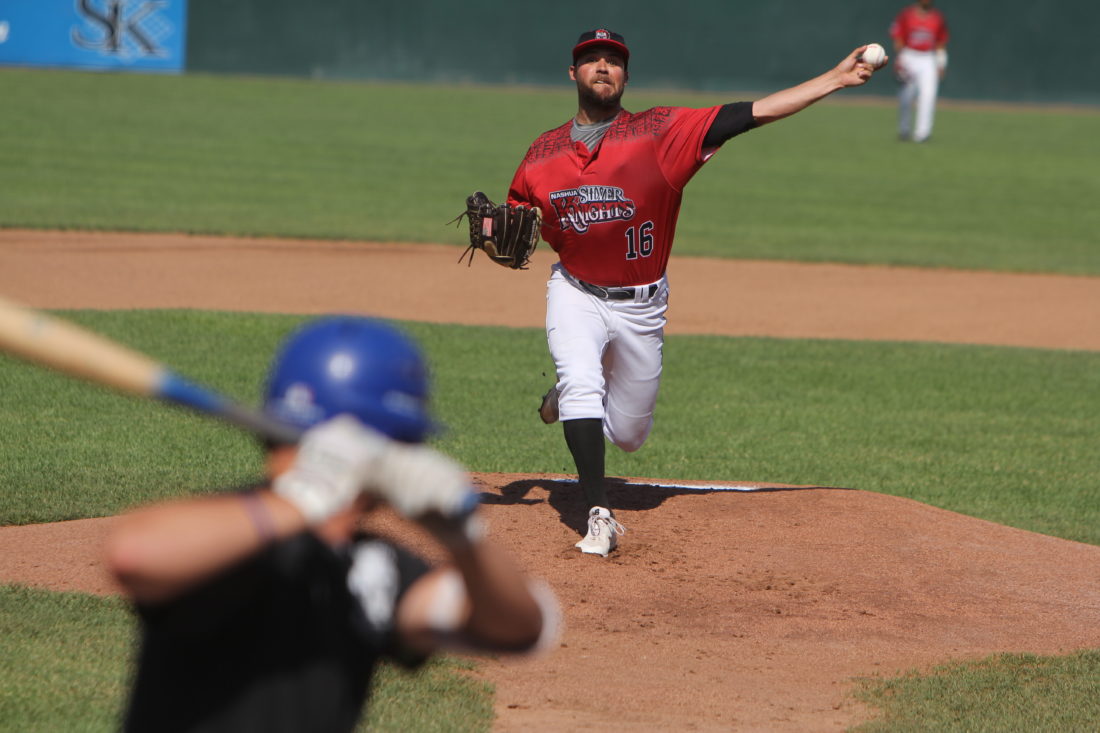 NASHUA – Who are these Nashua Silver Knights? Certainly not the same team we saw through the Futures League All-Star break at the start of a week-long stretch away from home.

That team had fallen two-plus games in back of the North Shore Navigators for the sixth and final playoff spot.

And now? Now Nashua is in control, two games ahead of the Navigators going into North Shore’s game Tuesday night against a struggling Brockton team.

“We have a chance to even catch Pittsfield,” Silver Knights manager B.J. Neverett said on Sunday as his team swept the Rox in a doubleheader. “We’ll probably know by Friday night what the weekend means.”

By then the Silver Knights, who blanked Pittsfield Monday night 3-0 behind the shutout pitching of Brandon Dufault (4-1), Cam Cruz, Joe Grassett and Drew Farkas (fourth save) to close to within a half game of the Suns, whom they face three times before Sunday. Pittsfield (18-27), like Nashua, had Tuesday off but there will be a lot of interest in their game tonight in Lynn vs. North Shore. Nashua is at Pittsfield Friday again and then face the Suns in a completion of another suspended game at Holman Saturday at 3:05 p.m. with the regularly scheduled home finale to follow around 6:05.

Nashua (19-29) has surged into a position of destiny control with good solid pitching, as the team is second in the FCBL with a 4.03 team earned run average.

True to his word, Neverett searched for late season help and found a starter in the University of Rhode Island’s Justin Cherry, who pitched a complete game win Sunday.

Lefty Justin Snyder has moved from the bullpen to a starting role – he should pitch the nightcap tonight – and reliever Cam Cruz, who may try to finish off an inning or two of tonight’s suspended game vs. Bristol, has helped since his return from injury.

But Snyder, who made his first start a few weeks ago in a doubleheader – has thrived. He’s 1-0, 2.11 in five appearances, including three starts.

The Silver Knights also may have gotten a boost in the return of lefty Pat Maybach from injury. Out since mid-June, he came back to pitch an inning of relief on Sunday night, giving up two unearned runs. At this stage he may have to just come out of the pen (he had two starts early on), but his return in any capacity is a plus.

Remember, the resumpiton of the now-ruled suspended game with the Bristol Blues will be at 6:45 p.m. tonight at Holman. Prior to that, the Nashua Police and Fire Departments will stage their annual softball game at 5 p.m., with gates opening at 4:30. There is a ticket charge for that game but it also includes entry for all of the Silver Knights baseball to follow. The nightcap should start at about 7:30 p.m. Call the Knights at 718-8883 for more info. Also scheduled to appear is Merrimack’s Tim Schaller, who signed with Vancouver as a free agent after two seasons playing for the Boston Bruins.

Nashua will be looking for good crowds for their final three home dates. Thanks to the thunderstorm-dominated weather, the Silver Knights have the fewest openings of any FCBL team, just 19, but as of Tuesday were second in the league in average paid attendance at 1,466 per game….

Neverett is expected back at the helm on Wednesday after funeral services for his father, Bill, on Tuesday. It’s likley, but not official, that Bill Neverett will be memorialized in some way soon involving his longtime Holman seat, 103N-18.