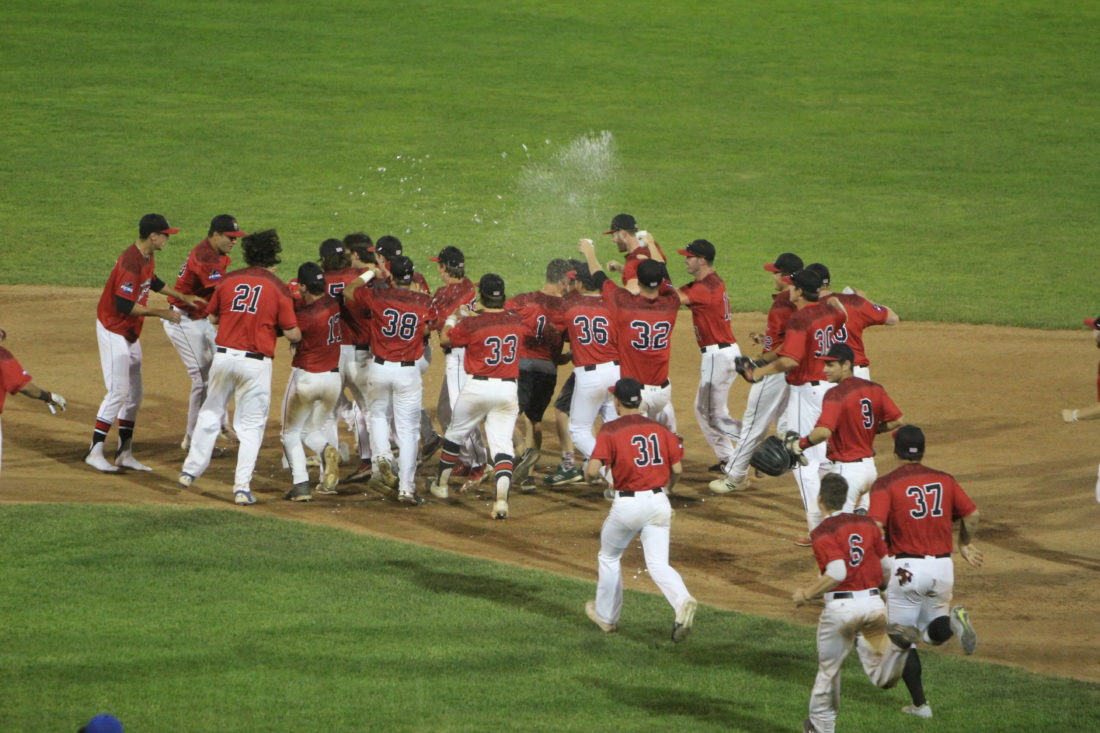 Staff photo by TOM KING Nashua's Cody Morissette gets sprayed with water after his walkoff single gave the Nashua Silver Knights a 5-4 win over North Shore and split of Tuesday's doubleheader at Holman Stadium.

Emphasis on “had”, as it turned out much better by nightfall. His bases loaded single through a drawn-in infield in the bottom of the seventh gave the Knights a big 5-4 walk-off win over North Shore and doubleheader split before a Holman Stadium crowd of 976.

“It was honestly a long day at the plate and was getting to me a little bit,” said Morissette, who made a crucial error in a 6-3, eight-inning Game 1 loss and was 0-for-6 on the day before his big at-bat. “So I went up, tried to clear my mind, hit the first pitch as hard as I could. That’s what I did and it found a hole.”

Nashua needed this one. The Knights had frittered away a 2-0 lead in the opener and blew a 4-1 lead in the nightcap, and a Navigators sweep would have put the Silver Knights (12-20) two-and-a-half back of the final playoff spot. Instead they’re back to where they were as the day began: a half game behind the Navs.

“I feel like we should have gotten two,” Silver Knights manager B.J. Neverett said. “We almost lost the second game in the field like we lost the first game. That’s been our problem. … It’s nice to win a game.

“Again, there are 24 to go. I don’t think it’s that grave yet. The good news is we’re in control of our own destiny, we don’t have to worry about anyone else. Just take care of our own business and see how it goes.”

Nashua grabbed a 4-1 lead in the nightcap on the strength of back to back RBI doubles by Lebel and Ryan Berardino in the first and a Lebel pop fly two-run double in the fifth that Navs right fielder Drew Robertson completely lost track of as it fell behind him. “We got two runs,” Neverett said, “on a ball that was lost in the sky.”

However, Nashua returned the favor in the next half inning as starter Brandon Dufault’s errant throw to second on what looked like a sure double play plated two runs, and the go-ahead run came in on a Spencer Brown grounder to short.

But in the bottom of the seventh, Navs reliever Garret Keough (3-3) plunked Dylan Jones to lead the inning off and Jones scampered all the way to third on a wild pitch. Austin White beat out a chopper that Jones couldn’t advance on, but the Navs opted with no one out to load the bases by intentionally walking Jeff Costello, bringing up Morissette.

His hit to left made a winner out of reliever Joey Grassett (3-1) who pitched a scoreless seventh.

The opener was deadlocked at 3, one inning away from home run derby before North Shore plated three off reliever Michael Guerrero (0-1) in the top of the eighth. Prentice walked with the bases loaded and Sal Frelick smacked a two-run single.

Nashua grabbed a 2-0 first inning lead on a Lebel two-run homer. However, North Shore got to starter Justin Snyder for three in the fourth. Usually a reliever, Snyder tossed three scoreless before leaving in the fourth with two on and a run in (2-1). But the tying run came on broken bat bloop single to left by John Prentice off reliever Michael Guerrero and the go-ahead on a Morissette error at short.

Nashua tied it on Teddy Beaudet’s sac fly in the fourth and it stayed 3-3 until the ill-fated eighth.

“We tried to get another inning out of (Guerrero),” Neverett said. “It didn’t work.”

Instead, they got another at bat later out of Morissette, and he made the most of it.

“It was a big game,” Morissette said, “and we needed it.”