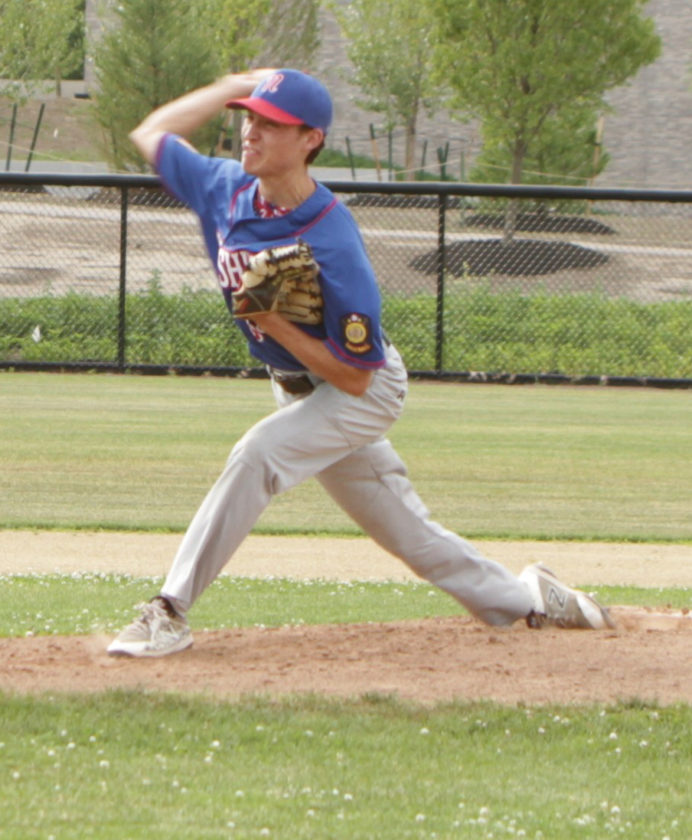 EXETER – Nashua Legion baseball coach Tim Lunn would have been hard-pressed to draw up a tidier District B opener.

Recent Hollis Brookline High School grad Joe Brown earned the win with six shutout frames, allowing a pair of hits and walking four with three strikeouts. Pat McCarthy closed with a scoreless seventh for the save.

“I took a break off, just to get my arm back in shape, but just getting back to it here, it feels really good,” said Brown, playing his second season with Post 124. “My fastball was pretty good. I had a little trouble with command, but my curve ball was working, too. All in all, it was a pretty good day.”

The Nashua bats were dormant early, potentially from a bit game rust and the fluid adjustment to wooden bats.

Second time through the order, though, things started to pop.

Trevor Kelly led the fourth and was pinged off the elbow with a breaking ball and stole second. He would not be there long as Mason Matylewski doubled Kelly home with a bomb to left. With two down, Will Brooks worked a walk and he chased Matylewski home on Nik DiRenzo’s game-breaking triple to the right-center field gap that made it 3-0.

Mason hit a pretty deep ball, it got us going. I think everyone started to relax,” said DiRenzo, who just finished up his sophomore year with HB. “Everyone was taking long swings. We started to shorten up our swings after that. We were kind of dead, and that hit got us hyped up. Joe pitched an outstanding game. I had so much confidence in him that if we got him one or two runs, we would win.”

From there, it was all about Brown.

The four freebies were a bit of a drag, but no Exeter run even reached third safely.

Will Brooks set the defensive tone early, gunning down the first Exeter base-stealing attempt and letting the other dugout know that it wasn’t going to be there all night. Hunter Routhier was sharp at short, too, making a couple of tough plays look easy in flawless night with the Post 124 gloves.

Nashua will need to do a better job at the plate as Zach Finkelstein’s second-inning single was the only other base hit of the night.