Dream come true for Merrimack’s Gasper as Yankees draft him 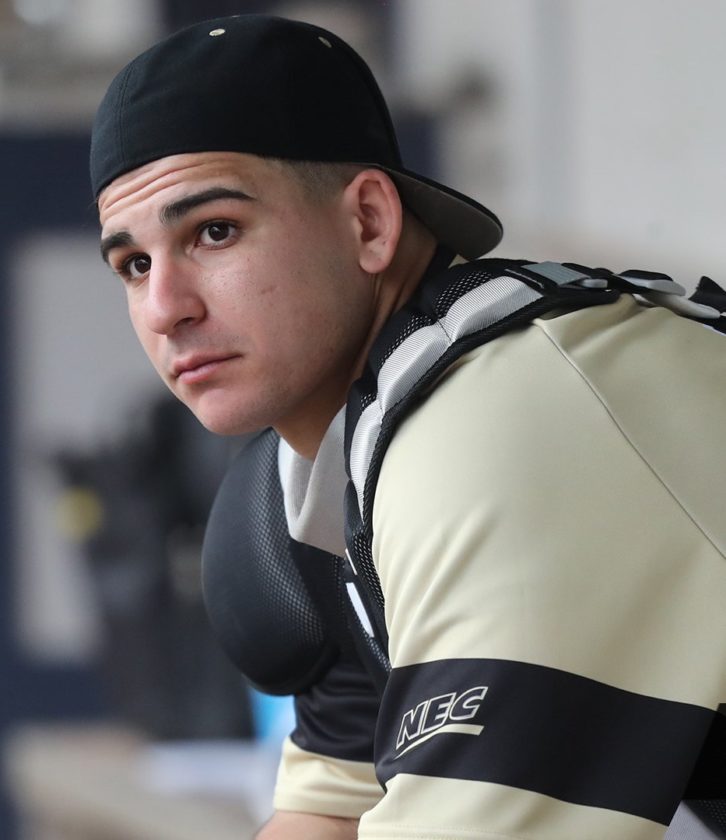 Photo courtesy of Bryant University Merrimack's Mickey Gasper, a Silver Knight standout in 2016, was drafted in the 20th round by his favorite team growing up, the New York Yankess on Wednesday..

The wait was excruciating for Merrimack’s Mickey Gasper – again.

But in the end, it was well worth it, as Gasper’s favorite childhood team, the New York Yankees, took him Wednesday in the 20th round of this week’s annual Major League Amateur Draft.

“I grew up a Yankees fan, and spent summers back in New Jersey (where he is originally from),” Gasper said. “It was always the Yankees. So this is a dream come true for me.”

It was looking like a bad dream all over again for the former Tomahawk catcher who just concluded his senior season at Bryant University. The St. Louis Cardinals had called him on Tuesday just before the start of the ninth round to see if he’d sign if they were to draft him, but then they changed their mind when their pick came. And remember, Gasper was hopefull a year ago, after his junior year, that he might get chosen in the later rounds but that didn’t happen.

“It was tough,” Gasper said. “It was definitely a long day, but in the end, it was worth it.”

Gasper, the former Futures Collegiate League Offensive Player of the Year in 2016 and Cape Cod League All-Star in 2017, was one of four former Nashua Silver Knights taken. Two Northeastern players, former Knights outfielder Charlie McConnell and infielder Max Burt, were chosen as was pitcher Seth Pinkerton of Hartford University. McConnell and Pinkerton, key components of the 2016 FCBL title team, were taken in the 13th round by the Mariners (McConnell) and 20th round by the Minnesota Twins (Pinkerton). The speedy McConnell was this year’s CAA Player of the Year (.347, 37 steals, 48 runs scored). Pinkerton, a flamethrower, went 2-3, 2.06 with 11 saves as Hartford’s closer and the ever steady Burt hit .272 with 12 doubles, three homers and 32 RBIs for the Huskies.

Burt, a starting infielder on the 2015 Silver Knights team that lost to Bristol in the FCBL semis, will fly down to Tampa, Fla. with Gasper on Thursday as he was also plucked by the Yankees in the 28th round.

“I can’t wait,” Gasper said Wednesday, adding that he’ll take his physical in Tampa, sign there, and begin workouts and eventually end up with a short season A-Ball team. He hit .340 with eight homers and 43 RBIs with Bryant this past spring.

Gasper knew the Yankees were interested as he worked out for them back in February at the New England Baseball Complex in Marlborough, Mass. Asked where he thinks he’s made strides in the last year, he said, “Definitely my catching.”

And then, while home with his father, Mick, a teacher at Goffstown High School, he finally got the call.