Stapelfeld has cornered the rookie market at Endicott 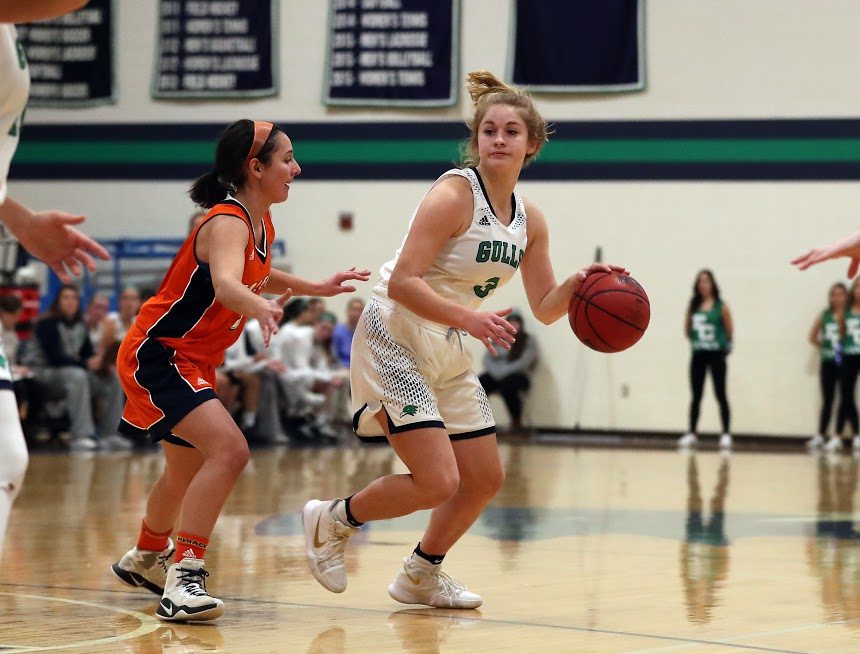 Endicott College women’s basketball coach Brittany Hutchinson was helping out at a clinic for high school juniors and seniors at Lawrence Academy in Groton, Mass.a few years ago when she noticed a younger player shooting off to the side.

“With her shot, she had great precision,” Hutchinson said. “I was rebounding for her and I said, ‘In a couple of years, you can play for me anytime you want.'”

Fast forward to this current season, and Hutchinson has her wish,as Brookline native and Hollis Brookline High School alum Cassandra Stapelfeld and her great shot are excelling on the court for Endicott College in Beverly, Mass.

Not only that, Stapelfeld is impressing the rest of the Commonwealth Coast Conference, as she has now won the Rookie of the Week Award an incredible six consecutive weeks. The guard who led the Cavaliers to the Division II finals a year ago is the Gulls’ second leading scorer at 11.3 points a game at last look.

“I was really young, and not really paying attention to it, but to have a college coach talk to me for the first time was cool,” Stapelfeld said of that first meeting with Hutchinson years ago. “I had never really heard of Endicott before.”

But in the next few years, with Hutchinson recruiting her, a constant presence at Hollis Brookline games, etc., she learned about the college, toured it, and decided that’s where she wanted to go to study nursing. The result is a comfortable setting, with a view of the ocean from her dorm, and so far a good adjustment to the college life on and off the court.

“I love it,” Stapelfeld said of her Endicott experience. “It’s very different (on the court). Everyone’s a lot bigger, a lot faster, and they play a lot different defense than in high school. I’m still learning.”

And knowledge retention won’t be a problem, Hutchinson says.

“She has a relentless work ethic,” the Gulls coach said. “It’s typically after the semester break that a freshman feels comfortable. That first semester is usually a roller coaster. She really came of age our first game back, against Brandeis.”

It was a loss, but Stapelfeld hit for 18 points, and then the Rookie honors began. According to Endicott sports information director Shawn Medeiros, it’s the longest rookie award stretch in the conference since 2013-14.

“We were just talking about it,”Hutchinson said. “That’s maybe the longest streak (of winning the award) ever. We’re really excited about it.”

As Hutchinson watched Stapelfeld compete at HB, she was floored. “When she really started expanding her offense, I was just blown away,” she said. “She’s always had a great shot. She’s got such a natural stroke.”

The next step for the 5-7 Stapelfeld is working on her defensive game. As she noted, that part of the game is played at a much different level than she was used to. “High school defense is so different,” Hutchinson said. “She was used to playing a lot of zone. … So the one thing now is learning the defense, and she’s done a great job learning our defensive concepts. For your great shooters, offense comes and goes in waves.

But defense, Hutchinson says, remains a constant. That shouldn’t be a problem as time goes on for Stapelfeld. “She’s so coachable,” Hutchinson said, “so committed and hard working.”

“I definitely did not expect all this,” Stapelfeld said. “It just took some time getting used to a new coach, figuring out her expectations.”

It’s probably safe to say those have been met.

They’ve basically become a dynamic duo for the Raiders, who are 8-5 overall, and 2-0 in the GNAC.

Graham is the Offensive Player of the Week, averaging 3.00 kills per set with a .511 hitting percentage. His highlight was hitting .444 with eight kills in a recent three-set sweep of two-time GNAC defending champion and nationally ranked (No. 11) Wentworth. He had 10 and eight kills in two other matches. He also averaged 1.44 blocks at the net.

Bucklin, meanwhile, in winning Defensive Player of the Week averaged 2.44 digs and 1.22 blocks per set. He also averaged 12.2 assists during the three match streak.

The two appear to be interchangeable. Late last month, Bucklin was the conference’s top offensive player for that week while Graham garnered the defensive award.

Former Bishop Guertin standout Blake Boudreau of Amherst is one of five Merrimack College men’s lacrosse players named as Inside Lacrosse pre-season All-Americans in the 2018 Face-Off Yearbook, released on Monday.

Boudreau, faceoff man extraordinaire, was a USILA All-American Honorable Mention a year ago after he ranked 12th nationally in faceoff percentage (won 236 of 382 for .617 mark) and 15th in ground ball pickups per game, with a team high total of 114 for the season. He transferred to Merrimack a couple of years ago from Marist College.

Two locals did well for the Southern New Hampshire University women’s track team in the recent Gordon Kelly Invitational on the campus of MIT.

Nashua’s Alana Murphy was second in both the triple jump (10.71 meters) and 9.47 in the 60-meter hurdles. Both results were tops among Division II athletes in those events.

A grueling Rivier University basketball season is coming to an end this weekend. The Raider men are now 2-22 overall, 1-14 in the GNAC after Tuesday’s 84-57 loss at Suffolk. The final game is Saturday at Lasell at 3p.m.