Not much value in anything O.J. Simpson related

Dear Babe: I have a plate that O.J. Simpson had made for all of his lineman and coaching staff when he ran for the record 2,003 yards. There were only about 40 that were made to commemorate the achievement and were never sold to the public – only given to teammates and staff. It was given to my dad by O.J.. My dad was vice president of player personnel when O.J. got the 2,003 yards in 1973.

“Too bad it is O.J.,” said Mike Heffner, president of www.Lelands.com.

“O.J. memorabilia is as dead as it can be. No demand,” said David Kohler, president of www.scpauctions.com.

While they agreed on the lack of value and interest, they did diverge on what it might be worth.

“I would venture to say this is a $50 piece but a hard sell for sure,” Kohler said. Everyone agrees it’s a sad state of affairs, when you have a hall of fame player who is so shunned by the public.

Just a side note, you said the plates were never sold to the public. That might have been the plan at the beginning, but with O.J. you just never know.

Dear Babe: I have an old baseball that I was given when I was 8 and in the hospital after a bazooka shell explosion in my basement. While in the hospital, a friend of the family, Ray Meyers, who was the manager of the Hollywood Stars in the old Pacific Coast League, brought me a ball signed by the team.

A bazooka shell explosion hospitalizing an 8-year-old for eight months sounds like quite a story in itself for another time.

In 1948, the Pacific Coast League was a just a few years away from being declared an “open” league, which put in a tier above AAA. Apparently the goal was to have it become a third major league. However all that went by the wayside when the Dodgers and Giants moved west in 1958.

Thanks to temperate climate on the West Coast, PCL teams played an extended season. The 1948 Hollywood Stars played 188 games, going 84-104 to finish sixth in the eight-team league.

The Stars were one of just three teams that were major league affiliates. The Stars were tied to the White Sox, while the L.A. Angels had a deal with the Cubs with the Seattle Rainiers an affiliate of the Tigers.

The Web site www.baseball-reference.com shows the team had three managers; Ray Meyers wasn’t one of them. Mule Haas, Lou Stringer and Jimmy Dykes were the managers over the course of the long season.

Based on the photos you sent along, the ball looks pretty beat up. The signatures are hard to read – at least in the photos. Da Babe did find three players on one panel, who were with the Stars in 1948 – Jim Delsing, Frank Kelleher and Andy Skurski.

Based on the roster on the Web site, it looks like Gus Zernial and Ray Boone (along with Dikes) would be the big names, since they ended up in the Majors, as well as Haas, who played in the majors before managing in the PCL.

“In average condition, the ball would sell for $200 to $300,” said Mike Heffner, president of www.Lelands.com auction house in New York. “In poor condition, it would be less than $100. There are still are some guys who collect PCL items. Old jerseys seem to be the most popular items and bring the most money – sometimes selling for up to five figures.”

Babe Waxpak is written by Bill Wagner. If you have a question for Babe Waxpak, include your full name and hometown, the card number, year and manufacturer or send a photocopy. Please do not send cards. The address is: Babe Waxpak, Box 492397, Redding CA 96049-2397 or email babewaxpak@charter.net. 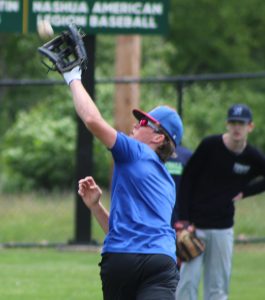