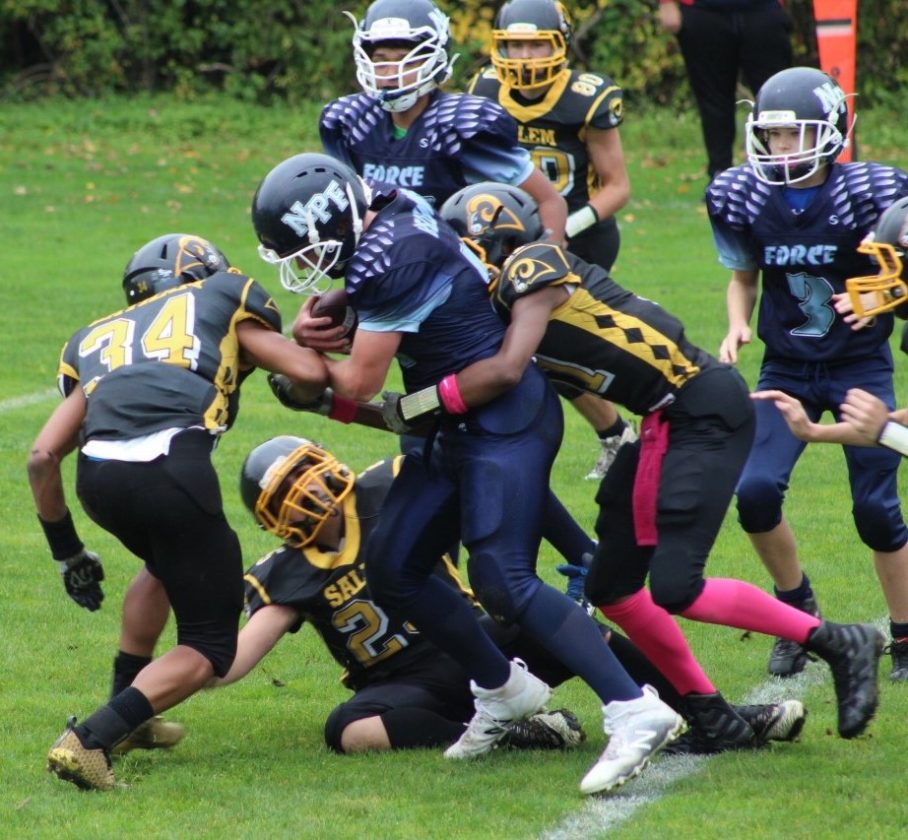 Courtesy photo Nashua 13U running back Charlie Bellevance plows ahead in a game in which he scored four TDs.

Bentley Christman started Force off with a big tackle, followed by more hard hits by both Anthony Samaral and Gustavo Baldon to set the tone on defense.

Back Yandel Valesquez behind a good offensive line scored the first TD, with Christman getting the extra point. Eli Gagnon made a good defensive play on Salem’s next possession and Alex O’Brien, Samaral, and Baldon also played well.

Nashua QB Drew Homsy tossed a TD pass to Samaral, who also scored the extra points to end the half.

Note: By rule, scores are not tabulated at this level.

Nashua fell from the ranks of the unbeatens while Manchester kept that status despite three touchdowns by Nashua’s Kobe Perry.

Manchester scored first in the second quarter followed by another score going into the half leading 14-0.

In the second half, Nashua’s defensive paced by linement Melvin Fernandez, Danuel Morales, Trevor Rivard and Shemel Williams and linebackers Evan Taylor, Jahsiah Corfield and Nick Wardner made a big defensive stand leading to an interception by Adrian Lazo.

A strong run from Johnathan Torres led to a Lazo TD but the Manchester answered to lead by two TDs.

Gavin Adkinson and Devin Giroux provided a Nashua pass rush to lead to another pick, this by Johnathan Torres (his first of two). Torres later scored while on offense and Steven Rosario’s PAT brought PAL to within 20-14.

The teams traded scores the rest of the way, however, with Manchester leading 26-14 and Nashua answering on a TD with the drive paced by QB Gavin Flynn and receivers Gavin Adkinson, John Barry Jr, and Johnathan Torres. John Barry, Jr. punched in the last score.

Nashua PAL next takes on city rivals the Nashua Crusaders.

Charlie Bellavance did all he could for Nashua with four rushing touchdowns, but the Rams, down 27-26, scored the game-winning TD with just 11 seconds left.

It ruined a superb come-from-behind PAL Force effort. Early on, Bellevance’s first score was answered by 20 straight Salem points to put Nashua back on its heels, 20-8 at the half.

The Force got off to a strong start in the second half, forcing a fumble that led to Bellavance’s second rushing TD, shrinking the Rams lead to 20-14. However on the ensuing kickoff, the Rams returned the kick to the house, stretching the lead back to 26-14.

Nashua hung tough, however, led by Bellevance, whose third TD closed the gap to 26-20.

Derek Finlay then kicked a perfect onside kick that was recovered by teammate Amaury Almonte, giving the the Force offense another possession and the momentum.

Nashua didn’t waste it, with Bellevance’s fourth score tying the game and a convesion pass giving it the lead 27-26 midway throught the fourth quarter.

But in the end, the Rams prevailed after a couple of stalled drives by both teams.