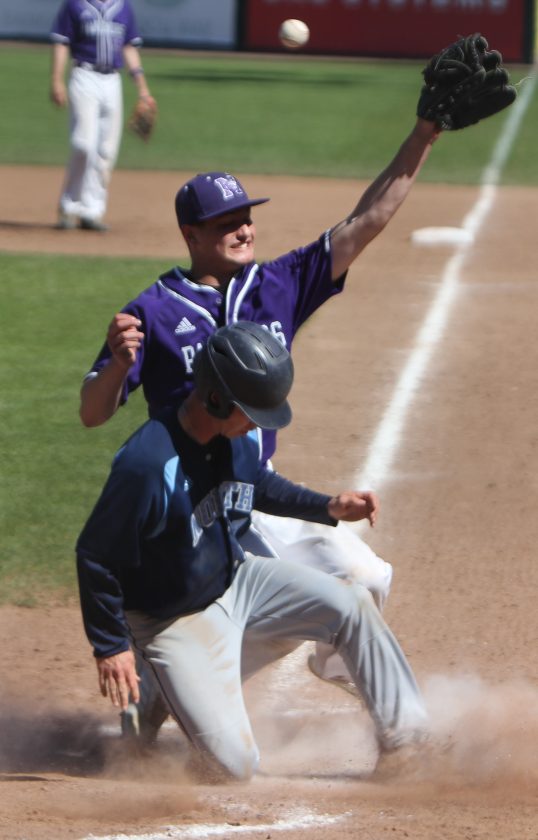 Telegraph file photo by TOM KING Will there be a spring season with plays like last year when Nashua North's Trevor Kelly beat the throw home to Nashua South's Andres Hulfachor? The NHIAA says if the schools reopen May 4, practices can begin that day with a short season to start May 13.

Tha’s the way New Hampshire Interscholastic Athletic Association Executive Director Jeff Collins is thinking as well as coaches and athletes as new dates for the spring season were announced on Tuesday.

“Should the pandemic cause the extension of online learning beyond the current May 4th guideline, we will once again modify the start date accordingly,” the statement read.

Collins is trying to be as optimistic as possible, and not setting any parameters. If things resume, they’ll play as many games as possible and then it’s likely there would be open tournaments in all sports.

But first thing’s first, if schools re-open: Get the student athletes out there.

“In the interest of our student athletes, we want to salvage whatever we can salvage,” Collins said yesterday. “You’re in Nashua – we want a Purple Panther lacrosse player or a baseball player to be able to put that uniform on again, even if it’s for just two games.

“Those are important milestones for seniors. It would be tough to see that go away. … We want to see it happen this spring.”

“Everybody is hopeful,” he said. “Everybody wants to have some type of season, for the sake of the kids, no matter how short it can be. … Any sense of normalcy will bring some relief.”

“Any opportunity we have to get them playing out on the field is great, especially for my seniors,” Bishop Guertin softball coach Leah Maciejewski said. “For a lot of them this could be their last year of playing competitive softball.”

Massachusetts came out with their current spring plan on Monday, which also starts practices on May 4 but the season on May 11, ending June 27, which is a week later than it usually does. New Hampshire ends its seasons usually a week earlier than Massachusetts, so how late would the NHIAA be willing to go?

“That’s a good question,” Collins said. “We’re hoping against hope that we can get something in before the end of the year. But really it all depends on what else is going on, when schools close, etc. We’re just taking it step by step.

“Right now, we see this as a viable method to get a season in and go forward with championships. We’re holding out hope. I don’t think anything is really off the table at this point in time.”

Collins knows the NHIAA isn’t in the driver’s seat. The original start dates of April 13 (practice) and April 27 (season) were out the window with Governor Chris Sununu’s order that the schools stay closed until at least May 4. “We will do whatever the guidelines we have set forth by the Governor, the CDC, the state deparment of Health and Human Services,” Collins said.

Coaches, of course, while optimistic are also being realistic, in terms of preparing their athletes. They can have contact with them regarding workouts, etc. As Nashua South baseball coach James Gaj said, “There are a gazillion different apps that we have that we can use with regard to communicating with the players for workouts and such.

“But what I think you need to do is mentally prepare these kids for anything. A lot of them have been working hard since our last out last year.”

Gaj has a lot of questions as to how a spring season will develop with the athletes.

“First, if they do resume school (in the buildings), I don’t think a lot of kids will come back,” he said. “I think their parents will keep them home. If the kids don’t come bck, will some teams be able to play?

“I’m in contact with the kids every day. I’m not worried about baseball right now. Are they all right? That’s what I’m most concerned about.”

Gaj knows of players that have been playing catch with teammates or family members, using the social distancing guidelines. But he also knows there are different living situations for a lot of players.

“The ones who have siblings, they seem to be doing OK. But what about the ones who don’t, it’s got to be tougher for them.”

Also, as Gaj said, “Someone who has a big house can go out and throw or work out in the back yard. But what about the kid who lives in a third floor apartment? They usually don’t have a yard or anywhere to go.

“I’m fielding a lot of questions every day from the kids. They ask the same thing: ‘What should we be doing? What do we do?'”

Gaj said Nashua athletic director Lisa Gingras has kept in constant contact with all the spring coaches. “Lisa’s been phenomenal about staying in touch,” he said. “She makes sure we’re in the know.”

Maciejewski says that her players have had joint workouts using zoom video, posted on the the BG softball Instagram page. “They’re doing anything they can to stay connected, stay together,” she said.

Gaj said that some athletes have been able to throw, others haven’t. He’s concerned about an injury factor when and if the actual preseason begins, but says that “I would hope we have every opportunity” to play.

“We as coaches have learned to be flexible,” Maciejewski said. “So if we can do it now for these kids, we’ll do it.

We’re looking forward to something, whatever it will be. We’d be grateful to have the opportunity to not have the season pass us by.”

Soucy doesn’t care about tournaments, or wins and losses. “Tournaments would be great,but I just want (the athletes) to play…

A couple of local football student athletes have let their plans be known for next year.

First, Bishop Guertin quarterback Hayden Moses, who missed all of last season with a torn ACL, will attend Bridgton Academy in Maine next year and play football.

“We are very excited that Hayden will be continuing his football career at Bridgton Academy,” Bridgton coach Rick Marcella said in a statement, “and look forward to his contributions both on the field and as a member of our school community.”…

Also, Merrimack football standout Zach Twardosky has committed to play football next season at Endicott College in Beverly, Mass. “First I’d like to thank my family for always supporting me,” he said, while also thanking the Merrimack football program “for getting me to this point. Huge thanks to (Endicott) Coach (Paul) McGonagle and the entire staff at Endicott for giving me this opportunity.”